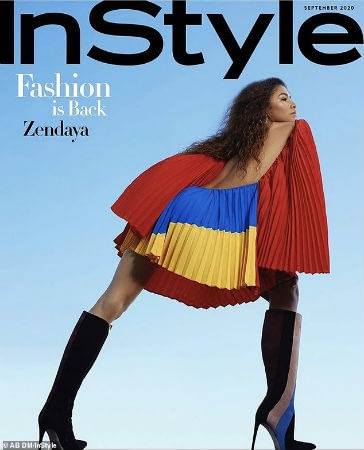 –In the story, Zendaya talks to Black Lives Matter co-founder Patrisse Cullors about her activism. “I’m an actress, but I’m also just a person who has a heart and wants to do the right thing.”

-Zendaya’s rumoured boyfriend Jacob Elordi is interviewed in Variety, and talked about not yet seeing Kissing Booth 2, and the attention surrounding Deep Water costars Ben Affleck and Ana de Armas (“I feel so bad for them. Let them walk their bloody dog”).

-E! News is reporting that Jennifer Garner has split from John Miller after almost 2 years together. In (possibly related?) other news, she was spotted hanging out with Alias costar Bradley Cooper and his daughter on a beach in Malibu. (This is a much better rumour than the one about Bradley dating Anna Wintour, which is somehow circulating again.)

-In a clip for the new season of Selling Sunset, Chrishell Stause reveals This Is Us star Justin Hartley told her via text that he had filed for divorce. “I found out because he texted me that we were filed. Forty-five minutes later, the world knew … I talked to him right after ‘cause I thought that must be a joke, but that was kind of the end of the communication.”

–Jason Momoa had wife Lisa Bonet‘s old Mustang restored. I can’t tell if this is just an elaborate ad for Ford or not, but it’s sweet enough that I can’t seem to bring myself to care.

-I’m very bummed that High Fidelity starring Zoe Kravitz has been canceled after just one season.

-Three of Bon Appétit’s Test Kitchen stars of color are departing the video channel after failed contract negotiations. Priya Krishna, Rick Martinez, and Sohla El-Waylly will no longer be in Test Kitchen videos, they announced on Instagram. How do you have a very public reckoning with how your treat your non-white employees, and STILL try to lowball them? Krishna mentioned in her statement: “Some of my colleagues in the test kitchen have been publicly supportive but privately complicit, even helping to interview BIPOC video candidates they know will be underpaid.”

-Amazon has ordered a TV adaptation of A League of Their Own, co-created by and starring Broad City’s Abbi Jacobson. Great, now do Pitch!

–Taylor Swift has confirmed that Ryan Reynolds and Blake Lively‘s daughter’s name is Betty, which I like a lot.

–Keke Palmer is set to host the 2020 MTV Video Music Awards at the end of the month. I wish covid didn’t mess this up by making the show more subdued than it usually is, cause she deserves a big moment.

-Music producer Detail, who has worked with Beyonce, Lil Wayne, Nicki Minaj and Jennifer Lopez, was arrested and charged with 15 counts of sexual assault and five additional felony assault-related charges.

-What’s going on with YouTubers this week? First Jake Paul’s house is raided by the FBI, and now Alan and Alex Stokes have been arrested and charged with felony false imprisonment and misdemeanor swatting.

-This is a very good point about all of the celebrities who are posting support for Ellen Degeneres: their posts sound like they came from a digital media kit. The fact that so many of them reference exact amounts of what she’s contributed to charity is suspicious.

-The release date for Bill & Ted 3 has been moved again — this time up a week. Makes sense, as the following week is suddenly looking busy with Tenet and Mulan duking it out in what is sure to be a very closely watched battle pitting theatres vs streaming.

-A teaser is out for A24’s Zola, a thriller born from a Twitter thread about a Hooters waitress who meets a girl who asks if she wants to make some extra money stripping, and then they end up on a roadtrip to Florida that involves prostitution, pimps, a bipolar boyfriend, kidnapping, and murder. It is a master class in storytelling.

-Also, A24 correcting People’s headline about the teaser is priceless.

-As if she hasn’t given us enough with Black is King, Beyonce also posted three new photos today on Instagram.

–Nicole Kidman, Bobby Cannavale and Melissa McCarthy are set to star in Hulu’s limited series Nine Perfect Strangers, which is based on Liane Moriarty’s latest book.

-A trip to meet the parents becomes a horror show in the trailer for Charlie Kaufman‘s i’m thinking of ending things.