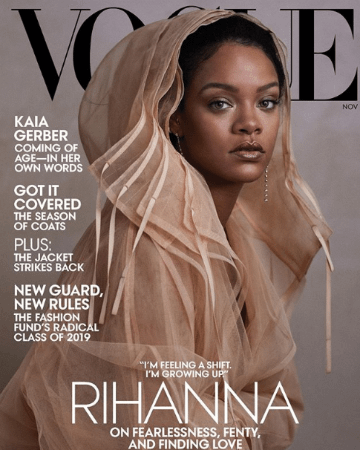 -In her new Vogue cover story, Rihanna confirms she turned down Super Bowl halftime show in solidarity with Colin Kaepernick (“I couldn’t dare do that. For what? Who gains from that? Not my people. I just couldn’t be a sellout. I couldn’t be an enabler. There’s things within [the NFL] that I do not agree with at all, and I was not about to go and be of service to them in any way”), reveals that she’s already planning her wedding dress (“It would probably be a collaboration between myself and [John] Galliano”), and rails against Trump’s stance on gun control (“It is devastating. People are being murdered by war weapons that they legally purchase. This is just not normal. That should never, ever be normal. And the fact that it’s classified as something different because of the color of their skin? It’s a slap in the face. It’s completely racist. Put an Arab man with that same weapon in that same Walmart and there is no way that Trump would sit there and address it publicly as a mental health problem. The most mentally ill human being in America right now seems to be the president”).

-In her Elle cover story, Mindy Kaling says the TV Academy tried to remove her producing credit on The Office. In response to their denial, she tweeted: “Respectfully, the Academy’s statement doesn’t make any sense. I *was* singled out. There were other Office writer-performer-producers who were NOT cut from the list. Just me. The most junior person, and woman of color. Easiest to dismiss. Just sayin’.”

–Angelina Jolie‘s dress at the Maleficent premiere is magnificent!

–Miley Cyrus and Cody Simpson are already in the “visiting each other in the hospital” stage of their relationship.

-In Ronan Farrow‘s new book, an NBC producer accuses Matt Lauer of raping her during the Sochi Olympics. The details of her allegations are as horrible as you’d expect. NBC News responded to the story: “That’s why he was fired within 24 hours of us first learning of the complaint,” while Hoda Kotb and Savannah Guthrie addressed the story on air. Guthrie said “I feel like we owe it to our viewers to pause for a moment. This is shocking and appalling, and I honestly don’t know even know what to say about it. I know it wasn’t easy for our colleague Brooke to come forward then. It is not easy now, and we support her and any women who come forward with claims,” while Kotb added “You feel like you’ve known someone for 12 years, you feel like you know them inside and out, and all of a sudden a door opens up and it’s a part of them you didn’t know. We don’t know all the facts in all of this, but they are not allegations of an affair — they are allegations of a crime.”

–Matt Lauer‘s statement of denial is slut-shaming and disgusting.

-Also, after rejecting Farrow’s Harvey Weinstein story, the head of NBC News separately thanked Weinstein in an email for his compliments on Megyn Kelly’s debut.

-In lighter news, Twitter was *riveted* today by the tale of two British footballer’s wives. Collen Rooney couldn’t figure out which of her IG followers kept leaking her private IG stories to The Sun — but she had her suspicions. So she said she blocked everyone from viewing her stories except for the person she suspected and then posted false stories for months about her basement flooding, a trip to Mexico, etc. — only to see those stories later show up in The Sun. Today she revealed that the only person viewing those stories was Rebekah Vardy. This is so juicy it doesn’t even matter that I have zero idea who these people are!

–Mark Ruffalo‘s take on the Ellen Degeneres/George W thing is perfection. It’s not that two people with different views shouldn’t be civil or “kind” to each other. It’s that Ellen has since referred to the man who fought to keep her own marriage illegal as a “friend.” The Bush era was definitely not marked by “kindness” — and to dismiss his terrible legacy as a difference of opinion between pals seems overly simplistic.

-Also, her preaching “kindness” continues to lead to lots of tweets from people who’ve worked with her who find that ironic.

-Celebs are closing ranks around Ellen, in any case.

–Chrissy Teigen, Seth Rogen, Kate McKinnon and more stars go on global eating tour with Dave Chang in a new Netflix food series. I love shows like this. Gywneth Paltrow has never been more endearing as when she was eating her way around Spain on camera.

-I gave up on Riverdale in season one, but I’m intrigued to see how the show honours Luke Perry in tonight’s premiere.

-A big shift is coming for TV, with the arrival of new streaming platforms Apple TV+, Disney+, HBO Max and NBCUniversal’s Peacock joining the already established streamers. This shopping guide makes it clear just how expensive it’s gonna get.

-All of the reminiscing about Angel on its anniversary makes me wanna do a rewatch!

-The guy who played Carlos on Desperate Housewives is NOT happy with Felicity Huffman‘s 14 day sentence: “White Privilege. And I saw eight years worth of it, so I know what I’m talking about. Accountability and responsibility don’t mean [s–t] to these people…Slap on the wrist. Sorry, but this is [s–t].”

–Joshua Jackson being proud of his gf is a mood.

–Alicia Vikander and Riley Keough star in the trailer for the Netflix film Earthquake Bird.