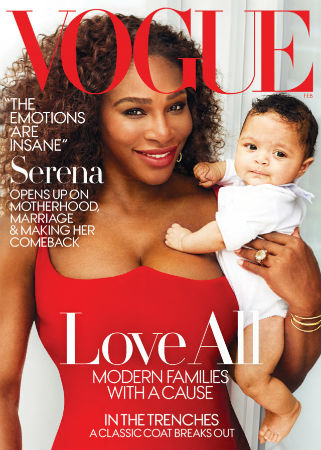 –Serena Williams debuted her baby on Vogue and she’s a cutie! In the accompanying interview, she talks about her scary post-birth complications and how she learned to “dream as big as men.”

-Good on Stephen Colbert for pressing James Franco about those sexual misconduct allegations. I don’t for a second believe his “I haven’t read them; I’ve heard about them” and saying the rumours are “not accurate” is weird wording, but at least after Colbert’s followup question he responded “if there’s restitution to be made, I will make it.”

-According to former LA Weekly film critic April Wolfe, who recently wrote a positive profile of Franco before The Disaster Artist, a story about him was already in the works.

-Meanwhile, the New York Times says their James Franco event was canceled due to the allegations.

-Well, this is some bullshit. Michelle Williams was reportedly paid $1,000 for those post-Kevin Spacey reshoots for All The Money In The World, while Mark Wahlberg’s agent secretly negotiated to get him $1.5 million. (The reason she got $80/day is because of SAG  scale; she probably would have done it for free.) Sony lists her as the lead actress, and he’s just supporting. Even worse, they’re both repped by the same agency. If Wahlberg’s publicist doesn’t immediately announce that he’s going to donate that money to the #TimesUp legal fund, we riot.

–Greta Gerwig finally talked about working with Woody Allen, which she now says she “regrets.” In a joint interview with Aaron Sorkin, she told the NYT: “If I had known then what I know now, I would not have acted in the film. I have not worked for him again, and I will not work for him again.” I’m so conflicted about this. I hate that she was the only one who seemed to be asked about her Woody connection at the Golden Globes (which was swimming with dudes who’ve worked with him more recently *cough* JT *cough*). That being said, I don’t understand how anyone in this day and age who’s worked with a known problematic man doesn’t have a soundbite ready and waiting. Being thrown offguard by these questions is incomprehensible to me at this point.

-The author of the rumoured upcoming Harper’s piece about the Shitty Media Men list has a history of sympathizing more with the accused than the accusers. On the plus side, the amount of verified women who came forward today to claim ownership of the list melted my heart.

-The Netflix exec fired for a comment at his daughter’s soccer game wrote about his regrets and the current climate in Hollywood.

-THR’s cover story on Ronan Farrow is worth your time.

-This is an interesting look at the future of TV. YouTube in the living room is our fastest growing screen, at 70% growth year-over-year.

-How cool is Céline Dion? So cool that she rolls with it when a female fan humps her onstage.

-Also, it looks like Marvel is moving ahead with a Black Widow movie. And a woman is writing it!

-I had assumed that Ricky Martin was already married but in any case, mazel!

–Jason Momoa forgot to bring a coat to Canada, and now he’s in Newfoundland where it’s cold af.

-I really liked Three Billboards Outside of Ebbings, Missouri when I saw it at TIFF, but the more distance I got from the film festival high, the more issues I had with it. Here’s a good recap of its growing backlash.

-Ohhh, @ira has a new podcast called Keep It? And the first ep is about how we all need to leave Oprah alone? Yes, please!

–Kyle Chandler uncovers The Vanishing of Sidney Hall in the new trailer.