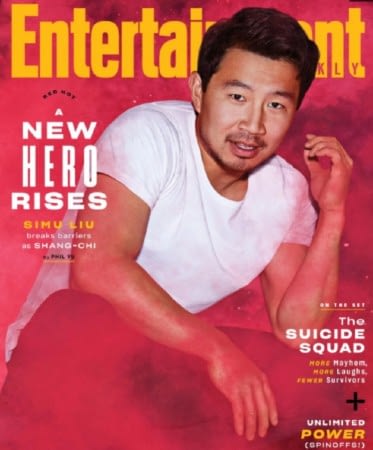 -I love seeing Simu Liu on the cover of EW!

-A day after Britney Spears‘ longtime court-appointed attorney Sam Ingham made moves to step down, her mother filed a petition for permission to hire private counsel on behalf of her daughter. I really hope Britney gets a say in this one, but this sounds like a step in the right direction.

–Gigi Hadid is asking publications and fan accounts to blur out her daughter’s face if they post papped photos. This seems fair and reasonable.

–Scarlett Johansson and her husband, SNL’s Colin Jost, are reportedly expecting their first child together. I wondered why she didn’t go to the Black Widow premiere or any of the events in person.

–Jessica Mulroney is accused of ripping off a design by British label Ralph and Russo. (She says it’s merely “inspired by” them, but it’s pretty damn close to theirs.)

-Good Girls’ renewal for a shortened final season was practically a done deal, so why did it fall apart? Christina Hendricks, Mae Whitman and Retta all agreed to take pay cuts to return for a reduced eight-episode swan song, but it sounds like co-star Manny Montana (Rio) had money and scheduling issues. There’s also speculation that he had a strained working relationship with Hendricks. Though it’s very strange that the show couldn’t just write off a supporting character.

-The AV Club compiled a list of the best TV shows so far this year, and I’ve watch so little of them.

–Tom Hardy is getting his first “story by” credit with Venom 2 after spending months over FaceTime brainstorming the plot. Screenwriter Kelly Marcel said. “This is new for him, to get credit, but it’s not new for him to be this involved. He’s absolutely 100 percent committed to everything that he does. He’s married to Venom. He loves this character. He’s very involved in what he thinks should happen…We spent months breaking the story together on FaceTime, riffing on ideas, seeing what worked, seeing what didn’t. Then I took everything we spoke about and holed up somewhere for three months quietly, knocking out a script.”

-The Boys launched a fake, Tucker Carlson-esque news show ahead of their new season.

-Good to see Kit Harington and Rose Leslie looking so happy (despite what some corners of GoT fandom seem to believe).

-I love Diane Kruger’s dress at Cannes, but man, the posture you’d have to maintain in that. I wouldn’t have it in me.

-The origins of The Kingsman movies are explored in the trailer for The Kings Man.