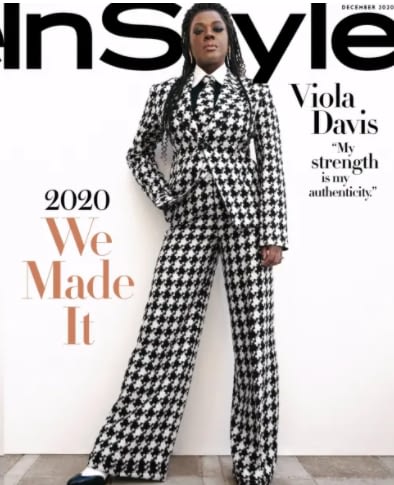 –Viola Davis rocks some killer pantsuits in the new issue of Instyle. In the interview, she talks about Black Lives Matter (“What’s happening is what has always been happening. We just decided to wake up. How have I been able to process it? I have days when I fail miserably. And that’s when I need my two or three glasses of wine. But I’m trying not to lose hope in humanity”), and her reputation as being “commanding” (“Other people see it much more than I do. I will say that I think my greatest source of strength is my authenticity. If I try to channel some other being, I get lost. That’s when my anxiety level goes up. Growing up in Central Falls [R.I.] as the only kinky-haired chocolate-brown girl, I always was trying to channel the girls who had the Farrah Fawcett look. It had disastrous results”).

–Beyonce and Jay Z’s kid Blue Ivy is officially a more productive member of society than I am.

-THR has a look into Warner Bros.’ decision to sever ties with Johnny Depp. They’ll still have to pay him his full Fantastic Beasts 3 salary, even though he only shot one scene.

-Love this Vulture piece on Ana de Armas and how in the absence of everything that makes a star, she’s still managed to become one — just not quite how she’d pictured it.

–Eva Longoria got heat for comments she made during an appearance on MSNBC, in which she compared the impact of Black women and Latina women on Joe Biden’s victory. She has since apologized and clarified her remarks.

-If Prison Break ever comes back, it’s going to be without Wentworth Miller. He said on Instagram: “I’m out. Of PB. Officially. I just don’t want to play straight characters. Their stories have been told (and told). So… no more Michael. If you were a fan of the show, hoping for additional seasons… I understand this is disappointing. I’m sorry.”

–Gillian Anderson was on Live with Kelly and Ryan this morning and every time I hear her talk with a British accent I do a double-take.

–Aldis Hodge is on the verge of superstardom and I can’t wait. He’s so, so good in One Night in Miami.

-I just can’t get enough of Dave Grohl and Nandi‘s video exchanges. The part where she tells him he has to practice his drums more is adorable.

-Did The Bachelorette break itself by dismantling its core premise?

-I’ve been done with Zachary Levi since he posted IG stories of him hosting a birthday party in the height of lockdown, but I see he’s still putting his foot in it.

–Vanessas Hudgens is back for another terrible-awesome holiday movie in the trailer for The Princess Switch 2: Switched Again.

-The more stills I see from Gunpowder Milkshake, the more I can’t wait to watch this movie.