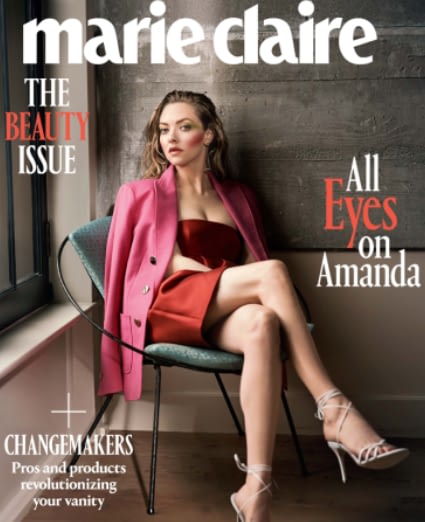 –Amanda Seyfried covers Marie Claire (wearing really unfortunate makeup) and talks about wanting to train to be a doula (“I was talking to my doula a lot about what she did. I was like, ‘That sounds like the best thing,’ and I just wanted to be there when people have a baby”) and having men ask her if it was about to rain after she starred in Mean Girls (“I always felt really grossed out by that. I was, like, 18 years old. It was just gross”).

–Katy Perry says motherhood changed her priorities: “A lot of BS just falls away. Stuff that you thought was important really was never important. You don’t have time for any sort of energetic drama that’s not important in your family.”

–Ariana Grande wore a bra to her brother’s wedding and fit right in.

-It was a brutal day for network TV. The CW cancelled Roswell, Naomi, Charmed, Dynasty, The 4400, and In the Dark. CBS dropped Magnum PI, Good Sam, B Positive, and How We Roll. NBC ditched Mr. Mayor, Kenan and The Endgame.

-The character of Francesca has been recast on Bridgerton. Hannah Dodd is taking over the role from Ruby Stokes (who just landed the lead on another Netflix show). So far, Francesca has been largely absent from the show so far, but her book is one of the best in the series.

-Did Kendrick Lamar announce the birth of his second child with his new album cover?

-This season of Survivor has had some of the best tribal councils in history, and last night’s was no exception. Drea talked to EW about her final Tribal Council comments we didn’t see, and her reaction to being called ‘aggressive’ by Jonathan.

-Despite all the rumours, Adele and Rich Paul have not broken up.

-I can’t remember the last time I’ve seen a blockbuster get overwhelmingly glowing reviews the way Top Gun Maverick is raking them in. People are in love with this movie.

-I adore Keanu Reeves and Sandra Bullock together and can’t wait for them to reunite onscreen, but I’m glad he wasn’t in The Lost City. Brad Pitt looked like he was having more fun than he’s had in years.

-Just in case you weren’t already convinced that NFTs were dumb, Madonna has launched three NFTs featuring 3D models of her naked vagina.

–Kourtney Kardashian broke her engagement ring by stepping on it.

–Dakota Johnson is charmed by Cooper Raiff in the trailer for Apple’s Cha Cha Real Smooth.