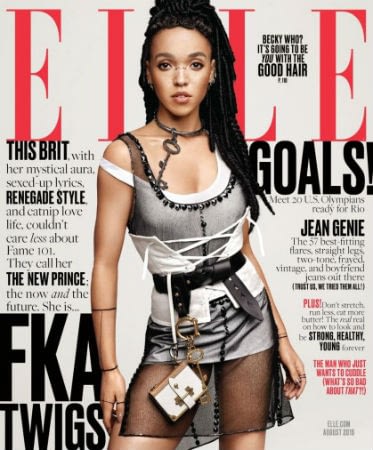 -Frankly, when I first saw this cover I was trying to figure out why they put FKA Twigs in that messy outfit instead of looking at the headlines surrounding her, but yeah, that Becky with the Good Hair joke is not great. Elle even published an article on their site from Melissa Harris-Perry about why it alarmed her.

-In an Instagram post, Lady Gaga says she and Taylor Kinney are soulmates who are just taking a break, and asked her fans to “please root us on.”

–Idris Elba dancing and singing in funny voices is making my insides goopy.

-I was interviewed by the Toronto Star and I praised Kim Kardashian. In print. Publicly. I don’t even know who I am anymore…

–Mila Kunis says she and Ashton Kutcher tried to just be f*** buddies but, like their crappy rom-coms suggest, that never works. “If we just paid attention to these movies [No Strings Attached and Friends with Benefits], we should know that s—t like this does not work out in real life.”

–Kevin Bacon on Comedy Bang Bang made me laugh a lot. (“In Kevintown, the main industry is fun!”)

-I really liked WB-TV’s use of Snapchat to preview some of their stars that will be at this weekend’s Comic Con.

-Speaking of Comic Con, Simon Pegg reveals all the disguises he’s used in the past to walk the floor.

-Did the Beyhive figure out some sort of advanced compression algorithm for superlong GIFs? Is there anything that fandom can’t do?!

-I just spent way too much time in this comment thread, reading about people’s celebrity encounters. The one about Tom Cruise serving kids cupcakes is great, as is the one with Topher Grace asking a girl if they once banged.

–Amandla Stenberg just joined the adaptation of Everything Everything — a book I loved. I really like this casting news!

-Screw this article about how what happened to Jones is a symptom of fan entitlement. It was racism and sexism, full stop.

-This is unexpected. D&D is making a comeback (with celebrities at least). Vin Diesel, Dwayne Johnson, Drew Barrymore, Stephen Colbert, Mike Myers, Jon Favreau, and Aubrey Plaza all say they play it.

-Unreal’s producers are defending this week’s twist. I’m not buying it. This season is definitely wobbly — possibly because of behind-the-scenes drama.

-This is an interesting article from Vulture on how women’s pictures found a new home on TV, but it feels like they’re turning a blind eye to soaps.

-Interesting: The Cut takes us inside Raya, the secret dating app for famous people.

-I need someone to explain Maria Bello’s pants to me. Do it like I’m a four-year-old (which is the age these must be designed for).

-Why would Jennifer Hudson do this?! She was just on Broadway, for crissakes!

-The only thing Democrats and Republicans agree on? The CW is a damn fine network.

–Ben Foster and Chris Pine are bank robbers in the Hell or High Water trailer.

Cover 15/16 Gaga & Taylor By Taylor Kinney 100% of sale goes to @BTWFoundation We made love on a canvas for peace. pic.twitter.com/pvsjgs8FTd

-It’s a bad week for Hollywood’s longtime couples (especially the ones who’ve been plagued by blind items). Yesterday was Josh and Diane, and today it’s Lady Gaga and Taylor Kinney who have called it quits.

–Matt Damon and Julia Stiles responded to Lena Dunham’s critique of the Jason Bourne poster, politely telling her to PFO.

-Meanwhile, I really like this cover story on Matt Damon, mostly because they got other celebrities to talk about him instead of doing the usual profile thing. Tina Fey’s comment is the best. Clearly.

-Here’s a good look at what’s next for Taylor Swift, now that her “aw shucks, math sure is hard, y’all!” persona has been blown to bits.

-Even her ex-guitarist is coming after her on Twitter now.

-Meanwhile, a lawyer has weighed in on if Tay’s “character assassination” claim is legit.

-Ohhh…I really hope this photo means Scott Speedman is on Aisha‘s podcast soon. Even if it’s just him repeating the word “hey” for an hour.  No one heys like Speedman…

-Here’s a peek at Anna Kendrick’s book cover. This feels like a “Oh god, what do I do with my hands?!?” pose.

–Chris Pine showed off his Jeff Bridges impression and proved he’s the king of inflatable flip cup on The Tonight Show. (Weird sidenote: I tweeted about Chris this morning and it went crazy with RTs. Y’all like him, huh?)

-I really, really like this article on why you should go see Ghostbusters right now (because it matters).

-Meanwhile, celebs came out to support Leslie Jones after her Twitter harassment.

-Yikes. Tom Sizemore was arrested on suspicion of domestic violence.

–Viola Davis reminds us she’s a badass in the final Suicide Squad trailer.

-It looks like Lady Gaga and the guy from The Vampire Diaries are dating again.

-Keep your eyes peeled, everyone. It sounds like Ryan Gosling and Eva Mendes might be road-tripping around Canada.

-It’s Breaking Bad links overload! Aaron Paul is the featured guest on this week’s Nerdist podcast, the cast goes bowling in this YouTube video, and the new season’s big bad looks like it may be Walt himself. Excuse me; I need to go peel my eyeballs from my computer screen…

-I’m not sure why the Kardashians continue to think we want to see their lip-dubs, but they did another one, this time to Notorious B.I.G’s “Hypnotize.”

-Despite sporting a giant rock while hosting the Miss USA pageant this weekend, Kelly Osbourne is not engaged.

–Gilmore Girls’ Alexis Bledel is much more comfortable showing her boobs on Mad Men than we are seeing them.

–Kelly Clarkson stepped out with her boyfriend in public for the first time  — and he’s a cutie!

-Sleep deprivation must be getting to new mom Hilary Duff. She says she “loves” changing diapers. Just wait ’till she starts waxing poetic about nipple chafing…

-If you want Nicki Minaj to perform at your music festival, you probably shouldn’t diss her biggest hit right before she’s set to go on.

–Seth MacFarlane isn’t about to apologize for sending out Family Guy Emmy consideration mailers and ads addressed to “Brentwood Jews.”

-Oh, goodie. The octomom is now a stripper.

-Coldplay’s Chris Martin and Rihanna get their kung-fu on in the new “Princess of China” video.

-Is Nick Jonas dating a former The Price Is Right model?

-This week, Stan Lee invited Felicia Day over for cocktails and conversation.

-Here’s our first look at Lindsay Lohan as Liz Taylor. Not bad, actually.

–Jason Alexander made a stupid joke about cricket being gay…but then rebounded by writing a killer apology note.

-I really, really want to see My Sister’s Sister, just because any movie that features Emily Blunt belly-laughing can’t be bad.

–Robert De Niro, Forest Whitaker and 50 Cent made a movie that’s probably going straight-to-DVD. Why, you ask? Exhibit A: the NSFW trailer.

-This Comedy Bang Bang! teaser is not only hilariously chocked full of trailer clichés, it also stars pretty much everybody.

-I’m crossing my fingers that the big-screen adaptation of Stephen Chbosky‘s The Perks of Being a Wallflower doesn’t suck, mostly because Chbosky wrote and directed it himself. Plus, the trailer looks promising. If you haven’t read the book, go read it right now! I’ll wait.