–Kristen Stewart covers Vanity Fair’s September issue, opening up about her career path, her on-again girlfriend Stella Maxwell, her belief in ghosts, and how she eventually recovered from Twilight mania. The video of her going through her film roles is incredibly charming. (I only wish she would have continued talking about Clouds of Sils Maria and explained the ending ’cause I’m still confused.)

–Shawn Mendes and Camila Cabello have taken their summer lovefest to the beach. If this is real, it’s A LOT.

-On What What Happens Live, Andy Cohen pressed Tituss Burgess on his co-star Eddie Murphy being “very problematic for the gays” and the Kimmy Schmidt star did not appreciate it. The actor then posted on Instagram that Cohen can be “a messy queen.”

-Look, the Cats movie is probably going to be a trash but at least it gifted us with this clip of Idris Elba trying to teach Stephen Colbert how to walk like a cat.

-I don’t believe for a second that Bradley Cooper and Jennifer Garner are dating, but they’ve been friends since Alias so I’m actually surprised it took tabloids this long to put them together.

–Lady Gaga‘s rumoured new boyfriend is an audio engineer who worked with her on her Vegas residency.

–Joe Jonas and Sophie Turner got matching tats in honour of their late dog, who was killed last week by a hit and run.

-Man, early buzz for Mindy Kaling‘s Four Weddings And A Funeral adaptation wasn’t great, but the reviews are out now and they’re really, really negative. (Indiewire didn’t hate it, tho!)

–Lil Nas X is getting love from Mariah Carey, whose Billboard record he just surpassed.

-I love that Sarah Michelle Gellar started a meal train for Selma Blair when she got sick.

–Willem Dafoe and Robert Pattinson lose their sanity in The Lighthouse trailer.

-Disney’s box office domination continues as four of its 2019 titles have joined the billion-dollar club and it’s barely August. (Just wait until the new Frozen and Star Wars movies drop.)

-Twelve strangers (including Betty Gilpin, Justin Hartley, Ike Barinholtz and Emma Roberts) wake up in a clearing, not knowing how they got there — or that Hilary Swank now plans to hunt them down for sport in the trailer for the aptly named The Hunt.

Why are you lying @jordynwoods ?? If you’re going to try and save yourself by going public, INSTEAD OF CALLING ME PRIVATELY TO APOLOGIZE FIRST, at least be HONEST about your story. BTW, You ARE the reason my family broke up!

–Khole Kardashian just went after Jordyn Woods on Twitter. I’ve been trying to avoid this story but day-um!

-Meanwhile, Woods says she feels like she’s “free” after discussing the Tristan Thompson scandal with Jada Pinkett Smith on Red Table Talk, where she denied the cheating allegations.

-Will Smith is clearly #TeamJordyn.

-The Kardashian fam is having a rough go of it in the romance department. Kylie Jenner accused Travis Scott of cheating.

-Human turd pile Johnny Depp is now going after Amber Heard with a $50M defamation lawsuit. “Ms. Heard is not a victim of domestic abuse, she is a perpetrator,” says the suit in reaction to an op-end the actress penned for The Washington Post in December.

-A lot of people are talking about Wesley Morris’ piece in the NYT on the Michael Jackson doc, which airs Sunday and Monday on HBO. The article itself is devastating; I don’t know if I’m going to be able to get through all four hours.

-Meanwhile, Oprah Winfrey recorded a special with the two men whose allegations against Jackson are detailed in the HBO documentary.

-The Jonas Brothers released a new video for “Sucker” that costars the brothers’ significant others (Piyanka Chopra, Sophie Turner and Danielle Jonas) and plays like outtakes from The Favourite.

-To celebrate this week’s home release of the Oscar-award-winning Spider-Man: Into the Spider-Verse, Sony has uploaded the opening 9 minutes of the film to YouTube. This might have been my favourite movie of 2018.

-Speaking of amazing movies from 2018, Eighth Grade is now on Netflix.

-I very much like Kelly Clarkson’s cover of Robyn‘s “Dancing On My Own.”

–Kristen Bell responded to a fan’s (very reasonable) question about how she can make speeches about protecting children’s privacy while also starring in a commercial with a kid.

-This video of the Brooklyn Nine-Nine cast and crew learning the show got renewed is delightful.

-I haven’t been active in fandom for years (though I still lurk in couple), but I’ve never seen a more positive one than the Wyonna Earp fandom. It makes me want to watch the show!

–Ryan Adams‘s planned tour of Britain and Ireland has been canceled amid allegations that he harassed women in the music industry.

-I love that Tom Cruise and Emily Blunt are in talks for an Edge of Tomorrow sequel. That’s my favourite airplane movie.

–Katherine Helmond, who played Mona on Who’s The Boss, has passed away. 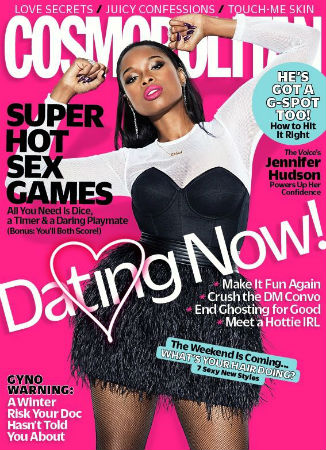 -What’s happening with Jennifer Hudson’s Cosmo cover? Is she dancing? Is she fighting? Also, I haven’t read Cosmo in decades but all of those headlines are hilariously bad.

-This interview with Melissa Leo is bananas. She talks about how difficult women directors are, says the reason she hasn’t been harassed by directors is because she’s “a small-breasted, red-headed woman with little eyes” and gets defensive over simple questions. The reporter calls it “the strangest and most uncomfortable interview I have ever done.”

-Here’s Jeff Goldblum coming up with hilarious, creative compliments for the Thor cast. I love that he uses exclamations like “super-duper” and “by gum!”

-HBO is dropping its project with news analyst Mark Halperin amid sexual-harassment allegations.

-Mandy Moore says she met her husband on Instagram, so keep on double tapping all the latte art photos that cute guy you don’t actually know posts.

–Ashley Judd, who was one of the first women to go on the record and kick this whole Weinstein story off, spoke with Sawyer about her experiences on Good Morning America.

-Meanwhile, Selma Blair and Rachel McAdams came forward to share their encounters with James Toback, and it sounds horrific. McAdams said when she told her agent what happened, she wasn’t surprised. “That is when I got mad, because I felt like I was kind of thrown into the lion’s den and given no warning that he was a predator.”

-In EW’s new cover story, insiders get really candid about why this moment in Hollywood is very different.

-This Sarah Polley profile is all kinds of wonderful.

-Here’s the trailer for the David S. Pumpkins animated special.

-The cast of Ryan Murphy‘s latest TV project is insane. Pose will star Kate Mara, James Van Der Beek and Tatiana Maslany, as well as the largest number of transgender actors in television history to have series regular roles.

-Was the set of Practical Magic cursed?

-Here’s the first trailer for Marvel’s Runaways, which critics are loving. I’m definitely here for anything that puts Buffy’s Spike back on my TV.