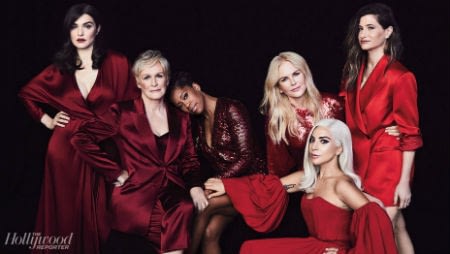 -The Hollywood Reporter’s actress roundtable features Glenn Close, Lady Gaga, Kathryn Hahn, Nicole Kidman, Regina King and Rachel Weisz. They talk about the times they wished they had spoken up more on set, and why it’s important to speak openly about pay and treatment. Said Kidman: “Working with younger actresses, I say, ‘Ask me anything and I’ll answer. Ask me anything financially. If you need advice, just ask. I can only tell you what I advise and you might take it or leave it. But it’s nice to have access to information.'”

-Similarly in an interview from Sundance, Michelle Williams remembers how an older actress flagged inappropriate actions on set she was younger, and now she wants to do the same. “It’s up to me to protect these women, girls who are younger than I am. And teach them how to protect themselves.”

–Patton Oswalt responded to an online attacker by donating money to the troll’s GoFundMe page and it all ended very sweetly.

-Even the props that you can barely see on The Good Place are next level.

-Wait, Jon Bernthal is in one of the episodes of Unbreakable Kimmy Schmidt that dropped on Netflix today? CLEAR MY CALENDAR!!

–Anne Hathaway confirmed that, almost 20 years after the original, that there is talk of a third installment of The Princess Diaries and she and Julie Andrews are in if the script is “perfect.”

–Matthew McConaughey ranked his best and worst rom coms and he chose How To Lose a Guy as his fave because he still gets residuals from it: “there’s always a great little check that shows up in the mail.”

-As if I wasn’t already excited for the next season of Fleabag, Kristin Scott Thomas and Fiona Shaw will appear.

-Alright, I’ll admit the new images from Once Upon a Time in Hollywood have me a teensy bit curious.

–Cardi B remains the best.

-The Magic Mike musical is set to premiere in Boston, with Channing Tatum and Steven Soderbergh on board to produce. Excuse me while I frantically look up plane tickets…

–Zac Efron plays serial killer Ted Bundy in the trailer for Extremely Wicked, Shockingly Evil and Vile, which is premiering at Sundance.

We should photoshop me over his yearbook picture next. #DontMessWithGabi https://t.co/o0qFBXvSNi

–Ryan Reynolds helped a teen get over her ex with some perfect Photoshop advice.

-I tend to really like Andrew Garfield, but he kind of stepped in it with this one.  “I am a gay man right now just without the physical act – that’s all.” Um, no.

–Blac Chyna‘s is reportedly exploring legal options against Rob Kardashian after he posted nudes of her on social media yesterday. As she should.

-Meanwhile, Rob‘s family is reportedly “deeply disappointed and frustrated” by his actions. “They are ashamed the war has become a public spectacle and hurting the family name.” Guys, just let that sink in for a sec.

-Congrats to Patton Oswalt, who is engaged to Meredith Salenger. It may seem soon, but that dude deserves all the happy.

–Seth Rogen‘s Twitter interactions with his mother are hilarious.

–Kesha released a lovely new song out and penned a deeply personal essay for Lenny. “I know that I was never abandoned by my fans, my animals, or my family, but when you are depressed — really, truly depressed — you feel like you have nothing.”

–Rihanna and Hasaan Jameel have reportedly been ‘hooking up for a few months’ but managed to keep it on the DL until last week.

-Look, I love me a little Justin Baldoni from Jane the Virgin, but does the world really need a men’s talk show?  Because the place where men get to talk is basically called the world.

-How To Get Away with Murder’s Charlie Weber talks about falling in love with Liza Weil on the set.

-It looks like Taylor Lautner and Billie Lourd are dunzo.

-CBS’s statement on the Hawaii Five-O shakeup and how they made ‘large and significant’ salary offers is supposed to make to Daniel Dae Kim and Grace Park look greedy for not accepting, but it just shows us how CBS has been paying them much less all along. The showrunner’s statement also tries to put the blame squarely on the actors.

–Steve Yeun talks about life after The Walking Dead in this new Vulture profile. I heart him.

-I’m looking at this photographic evidence of George Clooney holding a bassinet and I still kinda don’t believe it? My mind is buffering.

-I don’t know why the latest edition of GOOP includes a story about the Illuminati, but I’ve never been more interested in it.

–Jimmy‘s beard in the new You’re The Worst promo is hilariously tragic.

-It’s been a few days but I don’t think I missed that much (besides Gwyneth Paltrow admitting that she’s tried Botox, a Catching Fire trailer dropping, Tyrese saying a whole bunch of stupid shit and then kinda apologizing, Patti Smith laying down some wisdom, and the entire internet getting fooled by a sketchy story about a Friends reunion).

-One thing I didn’t miss was having to read about Amanda Bynes‘ daily breakdowns. Yesterday she posted a bizarre video about primping for a night out while sucking on Sour Patch Kids (no, really), a video which she later called “perfection” in her latest Twitter rant. Oh, and then today she stepped out looking like this.

–Kristen Stewart (who was at Coachella with RPattz) is officially on board for the Snow White sequel. Strap in for the most awkward press tour ever!

–Lindsay Lohan (also at Coachella but I managed to avoid her completely — woot!) is still debating her rehab options.

-Meanwhile, Amanda Seyfried very awkwardly answered a question about her Mean Girls costar Lohan in a new interview with Allure.

-Speaking of Allure, check out the stars who stripped down for their annual naked issue.

–Jimmy Kimmel joked about our buffoon of a mayor on last night’s show.

–Malin Akerman had a son yesterday and I’m pretty sure I had no clue she was pregnant. In any case, mazel!

-In a deposition for her divorce trial, Kim Kardashian just admitted that she’s spent more time in her relationship with Kanye West apart from him than with him. Hope she enjoys semi-single motherhood!

–Macauley Culkin got into an altercation with some photogs while leaving a bar in Brighton last night.

–Thom Yorke and Nigel Godrich participated in Rookie’s “Ask a Grown Man” video series and it was awesome. I kind of want to watch these guys give dating advice to teen girls for the rest of my life.

-Bad news for The Hives. A Swedish court has ruled that they must pay The Cardigans $3 million that was shuffled around by a management company representing both groups.

-This is blowing up the intertubes today: a deleted scene from this week’s Parks & Recreation in which the director asked guest star Patton Oswalt to improvise a filibuster and he launched into an epic, eight-minute, one-take nerdfest.

–Conan O’Brien interviewed the creator and cast of Breaking Bad. It’s an hour long so I haven’t had a chance to watch it yet, but yay!

-Also, Aaron Paul sent a cryptic tweet about hosting a finale viewing party in a cemetery.

-Salt of the earth gents Chris Brown and will.i.am have been accused of plagiarizing their new track.

–Gillian Anderson looks fab on the set of Hannibal. Crap, I’m going to have to start watching it now, aren’t I?

-Whoa. When did Friday Night Lights actress Aimee Teegarden become all grown up?

–Adele turned down a seven-figure deal to write a memoir because she’s “far too young.”

–Coolio still thinks he’s living in a gangster paradise. He’s facing charges for allegedly punching his live-in girlfriend…and then hitting her with his car!

–Ozzy Osbourne has denied that his marriage to Sharon is on the rocks, but he did admit that his substance abuse has caused a rift between them.

–Carey Mulligan looks amazing in the new issue of Vogue.

–Seth MacFarlane is pissed that a fan-cut video makes it look like Family Guy predicted the Boston marathon explosion.

-Meanwhile, Stephen Colbert‘s note-perfect response to Boston tragedy is worth a watch.

-Obama told the Today Show that he had “better things to do” than help Beyonce and Jay-Z plan their vacation to Cuba.

-Is this the final nail in Britney Spears‘ career? She’s releasing a song for Smurfs 2.

-Paramount is playing up World War Z‘s blood and gore to try to make us care. Meh, I’m still not there.

-Huzzah! The Pitch Perfect sequel is a go!

-Everyone’s talking about Evan Rachel Wood‘s baby bump, but I’m more focused on her bad makeup. What’s going on there? Too much powder?

–Jennifer Aniston is into cupping (which sounds way dirtier than it really is).

–Rihanna was spotted at a doctor’s office, which kicked off speculation that’s she’s pregnant (because why else would a young woman possibly need to visit a doctor?!), but her camp is shooting down the rumours.

-Is anyone else really surprised that Victoria Beckham is only 39? She seems older to me, for some reason.

–Jada Pinkett-Smith tried to explain her “open marriage” comments but ended up just making it worse.

-Even I have to admit that the new Man of Steel trailer is kinda impressive.