-What the hell is happening behind the scenes on The Affair? First Ruth Wilson leaves and says she can’t talk about why, and now Joshua Jackson may not return for the final season (even though he did some of the best work of his career in the season that just ended). He reportedly does not want to return and “left on very distinct terms.”

–Shia LaBeouf and FKA Twigs are dating? Really?!? (The fact that she confirmed this via “home intercom” slays me.)

–Will Smith celebrated turning 50 by bungee jumping over a cliff. So there.

-There is a theory that Meghan Markle is hiding a pregnancy with her new straight hairstyle. That’s…not how hair works.

–Gwyneth Paltrow admits the term “conscious uncoupling” is dorky in a new podcast.

-The Veronica Mars writers room just added Kareem Abdul-Jabbar, which is all kinds of awesome. Cast-wise, Jason Dohring, Francise Capra and Percy Daggs III have signed on to star in the revival.

–Nicki Minaj gave former Cosby Show star Geoffrey Owens $25k after it came out that he was working at Trader Joe’s, and now he’s donated it to charity.

-Today a judge called Bill Cosby a “sexually violent predator” and sentenced him to 3-10 years in prison, with no bail.

-In a NYT op-ed, Padma Lakshmi reveals she was brutally raped at 16 and didn’t report it. “I am speaking now because I want us all to fight so that our daughters never know this fear and shame and our sons know that girls’ bodies do not exist for their pleasure and that abuse has grave consequences.”

–Lady Gaga released a minute of music from A Star is Born and shit, this movie is going to own me, isn’t it?

-I keep forgetting that Michelle Williams is married, but I’m so happy that she looks so happy.

-Ahead of tonight’s return, This Is Us’s five main stars reportedly got massive raises — and equal pay.

-Meanwhile, This Is Us’ Mandy Moore did really well in the whisper singing challenge on The Tonight Show.

-I’m kinda bummed that the Murphy Brown revival is getting bad reviews.

-Netflix’s Making a Murderer is making a comeback, with season 2 streaming next month.

–Helen Mirren can wear whatever the hell kind of backpack she wants, y’all.

–Mumford and Sons, what the hell are you doing?!

-The Warner Bros. Harley and Joker film will feature Dr. Phil being abducted by the villainous couple and milked for relationship advice. Wait, what?

–Elle Fanning and Ben Foster run from their past in the Galveston trailer. 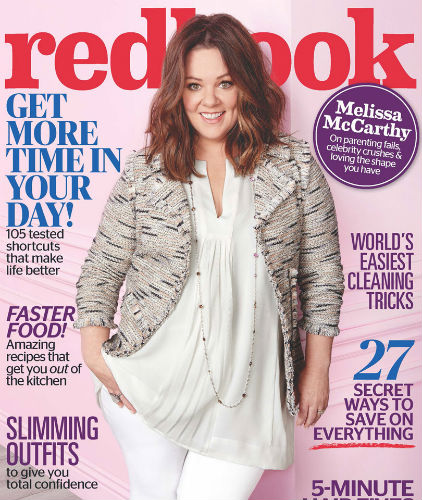 –Melissa McCarthy looks awesome on the cover of Redbook, where she talks about feminism, body image, and fashion.

-The international Ghostbusters trailer has way more Chris Hemsworth. Seems like a misread of the room.

–Mariah Carey saying “I still don’t know her” about Jennifer Lopez is giving me life. Bless you, Mimi!

-I really didn’t think Bella Thorne would be the voice of reason in the feud between Kim Kardashian and Chloe Grace Moretz. Huh.

–Mischa Barton is joining the new season of DWTS. What a time to be alive!

-I could read about the weird connections between new odd couple Selma Blair and David Foster all day.

-I’ve got nothing but love for the fact that Amy Schumer’s new book is called The Girl With the Lower Back Tattoo.

–Padma Lakshmi admits she didn’t know the paternity of her daughter for a time. I don’t know why we all needed to know that, but speak your truth lady!

-Looks like Supergirl is getting renewed. God, do I have to start watching it again? Someone tell me if it got better…

-I spend the entire time watching The People vs OJ Simpson being fascinated by what John Travolta is doing — but unsure of whether it’s terrific or horrible. Either way, it’s pretty damn enjoyable to watch…as is Max Greenfield’s impression of him.

-I still can’t really wrap my head around a movie where Sally Field and Max Greenfield play a couple, but I’m intrigued.

-Fringe’s Anna Torv just joined David Fincher’s new Netflix series. I heart her and never understood why she hasn’t hit bigger, so this is good.

–Casey Affleck is not having a good week. Stay away from the back tattoos, Casey!

-I have no interest in watching A&E’s Damien, but I love how they made up their writers room.

-Is anyone even a little bit surprised that IMDB’s rating system is allegedly “completely and irrevocably rigged”?

-The new Game Of Thrones trailer has arrived (featuring a boss cover of “Wicked Game” by James Vincent McMorrow).