–Adam Driver‘s Burberry campaign is a LOT. In the video, he swims with a horse and eventually becomes a centaur. In the stills, he looks like he’s posing for the cover of a book that I would definitely read.

-Someone was brave enough to ask Matt Damon about Bennifer during his Stillwater press tour. “He deserves every happiness in the world. I’m glad for both of them.” That’s very nice while also effectively conveying a “don’t ask me again” undertone.

-When asked by another outlet about the latest photos, he said “All the pictures that have come out are the same ones that you see. I don’t know anything you don’t know.” Yeah, he’s done.

–Lorde did Vogue’s 73 Questions, but at NYC’s Botanical Gardens instead of her house.

-There’s been rumours for a while that Lucy Lui and Bill Murray got into it on the Charlie’s Angels set (which resurfaced a few months ago when a PA from the movie tweeted that Murray rewrote a scene and told her “I don’t know what you’re complaining about. I gave you more lines. I mean… look who you’re in with here. You’re TV… and this is the big league”).  In a new podcast, she confirmed they clashed on set. “Some of the language was inexcusable and unacceptable, and I was not going to just sit there and take it. So, yes, I stood up for myself, and I don’t regret it. Because no matter how low on the totem pole you may be or wherever you came from, there’s no need to condescend or to put other people down. And I would not stand down, and nor should I have.”

-This is a good piece on how women and gay men are dominating hip hop right now, but getting little respect.

–Mena Suvari wrote a memoir about her rough go of things in Hollywood as she was coming up, and features a lot of older men using her when she was she was just a teen.

–Paris Hilton shows off her culinary skills, or lack thereof, in the trailer for her upcoming Netflix series. I’m not really sure what demo this is aimed at (does anyone even remember “that’s hot”?) but it looks fun enough.

-I had no idea Zach Braff directed episodes of Ted Lasso.

–Mila Kunis and Ashton Kutcher appeared on Dax Shepard‘s podcast and they all said that they don’t wash their whole bodies when they shower. What? They also said they only bathe their children if there’s visible dirt on them. No really, what??

–Britney Spears‘ mom Lynne spoke out about the singer’s ongoing conservatorship battle in new court documents, saying Jamie “is incapable of putting his daughter’s interests ahead of his own” and that Britney has “fear and hatred” towards him.

–Britney, meanwhile, has posted more topless pics on Instagram. I still don’t understand anything that’s happening with her feed.

-I totally forgot that Comic-Con was happening and I barely heard anything about it. Here’s the biggest (though not really) reveals.

-The all-new trailer for Ghostbusters: Afterlife features the return of the original cast. I only have eyes for Carrie Coon, though.

-Pepsi finally relented and pulled that controversial ad — and apologized to Kendall Jenner for some reason (don’t they realize she’s the Becky in this?!).

-Meanwhile, Kendall just went public with her relationship with A$AP Rocky because girl know the value of a good narrative pivot.

-Is George Clooney giving up on his legendary pranks now that he’s going to be the busy father of two children? Probs not.

-Speaking of last night’s TV, the chances are looking good that New Girl will be renewed but if it’s not, I would be happy with that ep as a series finale. In fact, it probably should be.

-In his new memoir, Alec Baldwin says producers of the indie in which his character slept with Nikki Reed‘s didn’t tell him that she was only 16 at the time of filming. The producer went on a Twitter rant yesterday insisting that was not the case.

-We’re finally going to get to see Squirrel Girl on TV and Mae Whitman is gunning for the part HARD on Twitter. Get it, girl.

-I wish Jennifer Aniston would wear something other than a little black dress, but at least the one she wore to The Leftovers premiere was v. cute. Carrie Coon‘s dress, however, owned the night.

–Christine Baranski was a delight on James Corden, telling stories about skinny-dipping at her lake house and politely acknowledging that Michael Sheen did in fact name his penis after her.

–Victoria Beckham and James Corden recreated Mannequin and I’m here for it.

-Uh oh. Our days of free Spotify might be coming to an end.

-I gave up on Fargo last year but the new season is getting rave reviews.

–Susan Sarandon says she basically lived Feud IRL when the studio’s PR thought Stepmom would perform better if people believed she and Julia Roberts hated each other while filming.

-I love this piece on how Colossal gives us a female character who’s gloriously frustrating, selfish, and sloppy. God, I want everyone to love this movie as much as I do.

-In the Master of None season 2 trailer, Dev heads to Italy in search of romance. I adored the first season — and now there’s pasta! 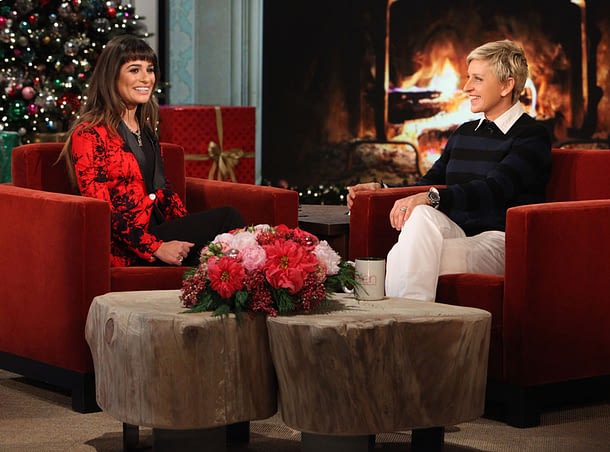 –Lea Michele talked to Ellen about losing Cory Monteith, and she was articulate and heartbreaking.

-Speaking of heartbreaking, Taye Diggs and Idina Menzel have split. Excuse me while I go sit in a dark room with the Rent soundtrack playing on a loop.

–Kyle Chandler‘s return to series television is no longer happening. Why does today hate me?!

-It turns out Kanye West didn’t actually say, “I am going to make Kim Kardashian a bigger performer than Beyonce.”  So that’s something.

-Meanwhile, South Park took another crack at Kanye in last night’s episode. (Watch the clip quick because it’s getting pulled like crazy.)

-I’ve never really had an opinion on Mena Suvari, but her hilariously awkward holiday card is winning me over.

-Speaking of people who are slowly winning me over, Emmy Rossum mocked Gisele Bündchen‘s breastfeeding photo on the set of Shameless.

–Amy Poehler and Billy Eichner forced people to sing Christmas carols on the street: “You don’t know me? Oh, you know me!!”

-Wait, so now Cameron Diaz is a lifestyle guru too? I can’t keep up.

-The Golden Globe nominations tend to be a bit ridiculous, but they did a lot of things right this morning, including recognizing Tatiana Maslany’s mad skills.

–Damian Lewis apologised for his stupid ‘fruity actor’ dig at Ian Mckellen, who continues to be super nice about the whole thing. He’s really killing it at this whole social media thing…

–Susan Sarandon says she was stoned at “almost all” the awards shows she’s attended. I think I love her.

-How great is it that Zach Braff is the godfather of Scrubs costar Donald Faison?  They’re one of my favourite Hollywood bromances.

-Legendary publicist Pat Kingsley just gave her first big interview since being fired by Tom Cruise. She touches on their fights about Scientology, but mostly keeps it classy.

-Good on Pretty Little Liars star Ashley Benson for calling out the crazy Photoshop on the show’s new poster.

-This new Community promo makes it seem like we’ve entered the darkest timeline.

–Conan, Ice Cube, and Kevin Hart asked a complete stranger to give them a lift — and it was great.

–Taylor Swift is hanging out with Lorde now, which can only lead to goodness.

–Jason Segel will play David Foster Wallace in a new biography. My brain is having trouble fully processing that sentence.

-Also hard to comprehend: Prince is going to guest star on New Girl.