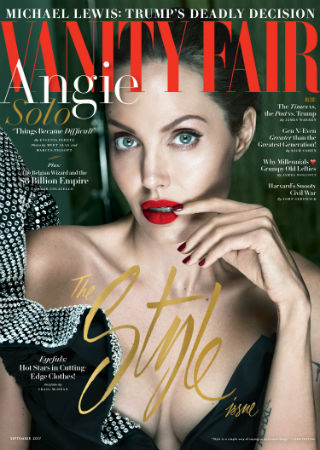 -I apologize for the wonky/light posting schedule for the next week or so — it’s TIFF! My first film is tonight, which will feature the reunion of two actresses and a director who are currently at war with each other. Should be a tense room.

–Terrance Howard is already in town for the festival, and he delighted the crowd in Shangri-La’s lobby last night with an impromptu performance. (I wouldn’t have been delighted. I would have hid behind the nearest security guard, but that’s just me.)

–Britney Spears will perform on Good Morning America. I’m going to DVR the hell out of that.

-Jeff Daniels spilled the beans about The Newsroom’s fate on Twitter yesterday, and HBO has since responded.

–Sarah Silverman‘s 19-year-old dog Doug died this week, and her post about it is a heart-shredder.

-19-year-old Dakota Fanning is dating a 32-year-old male model, which must not creep his friends out at all.

–Lamar Odom has reportedly checked into rehab for drug and alcohol abuse.

–Matt Bomer is pretending to be not totally freaked out by the fan petition to have him replace Charlie Huffman in Fifty Shades of Grey.

-Here’s the promo for the upcoming season of Grey’s Anatomy, for the three of you out there still watching.

–Kate Winslet and her belly bump were spotted on the way to TIFF.

-Everyone’s trying to figure out what will happen in the final four episodes of Breaking Bad based on their titles, which is adorable.

-The Emmys continue to sound like they’ll be a good time this year. Just announced presenting duos include Tina Fey & Amy Poehler and Zooey & Emily Deschanel.

-Speaking of Amy, the new Parks and Recreation bloopers slay me.

-A new Gravity trailer has landed. Someone on Twitter called it “shart-inducing,” which pretty much captures it.

–Blake Lively‘s rep is calling OK!’s cover story about her being pregnant “100% false.” Too bad; her household could use some good news this week.

-Here’s a photo of Matt Bomer dressed up as a fireman, because you deserve it!

-Why did Vogue Photoshop out one of Claire Danes’ legs and assume no one would notice?

–Jay Leno showed Aaron Paul an old clip of him on 90210 — and he was adorably mortified.

-For a show that came out of nowhere with basically no publicity, Orange Is the New Black is killing it with critics. (Deservedly so. I binged through all 13 episodes in no time.) And it seems like its good word of mouth is paying off: more people watched Orange in its first week on Netflix than Arrested Development.

-I’m really liking Sundance’s new show, in which Jim Rash (Dean Pelton!) takes us into a TV show’s writers’ room. The first episode is all about Breaking Bad.

–Michelle Williams is stunning in her new Louis Vuitton campaign.

-Here’s Donald Glover‘s new song. If he can’t be on Community full-time next season, at least he’s still giving us something.

-What kind of idiot hires Sarah Michelle Gellar for a TV show and then doesn’t put her on its poster? CBS is way overestimating the pull of Robin Williams.

–This photo of Jesse Eisenberg‘s reaction to Robert Pattinson kissing a mystery woman slays me.

–Kate and William named their baby George Alexander Louis.  Take it away, Twitter!

-In case you haven’t figured it out yet, Bruce Willis is kind of a jerk. Nothing makes me angrier than celebrities who refuse to help you promote their movies because they don’t think doing publicity is “fun” enough. It’s like they expect every part of their (already amazing) job to be blissful, and don’t want to play the promotion game because they didn’t get into acting to “sell.” Do you think a doctor has ever said “I’ll perform surgeries, but I refuse to fill in the charts because I didn’t get into medicine to do paperwork”?

-Here’s the first official look at Andre 3000 as Jimi Hendrix.

-I’m loving that this 1-minute horror short that was shot in Nova Scotia is going viral today.

–Lost‘s Josh Holloway singing on Yo Gabba Gabba will make you melt.

-Congratulations, Piper Perabo! You managed to find the most unflattering shorts in the history of the world!

-The first clip for Elysium has landed. I hope this movie is as good as it looks.

-I really liked this interview with Tatiana Maslany. Still can’t believe she didn’t get an Emmy nod!

-The trailer they showed for Gravity at Comic Con is breathtaking. Nothing beats one of Alfonso Cuaron‘s signature long tracking shots.