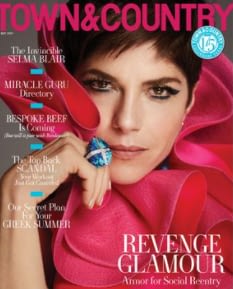 -In her Town & Country interview, Selma Blair talks about living with multiple sclerosis, and the power of makeup (“Makeup is not trivial to me. If anything moves the needle for me in my life—even before my diagnosis or challenges—it is my gorgeous war paint…I don’t mind if my muscles get caught at the intersection of a slow brain signal. I just want those words to come from lips covered in Chanel gloss”).

–Prince Harry and the Queen reportedly spoke privately on at least two different occasions while he was home for the funeral of Prince Philip.

-Meanwhile, Harry is now back in LA.

–Zac Efron (who is currently filming in Toronto) and his Australian girlfriend Vanessa Valladares have reportedly split after 10 months of dating.

-Speaking of splits, Jennifer Lopez‘s camp is saying she broke it off with ARod because she could no longer trust him.

-I’m so glad Shadow and Bones (which hits Netflix this Friday) is getting such glowing reviews — it’s 93% on RottenTomatoes. “Game of Thrones meets your fave CW show” sounds like perfection. I thought the original trilogy was pretty good but then ended up reading the other series, Six of Crows, since the show will also feature those characters too, and that series was amazing. I’m not surprised that the Crows segments (which are less magic-y and more heist-y), seem to be getting the most attention. I’m also very glad the show retained all the shipper goodness.

-Odd couple Lucy Hale and Skeet Ulrich are an odd couple no more.

-Though the popular assumption online is that there’s some sabotage via glam going on backstage, The View hairstylist says that her intentions are pure and not at all passive-aggressive.

-A new season of Master of None is coming in May. I loved that show, but I’m not sure how I feel about seeing more Aziz, though this season will reportedly focus on Lena Waithe’s character, Denise.

-Chanel is replacing their annual Oscars dinner with luxury at-home gift boxes. About 150 VIPs will receive boxes while the legendary French fashion house makes a donation to The Actors Fund.

–LeVar Burton is getting his wish to guest-host Jeopardy.

–Eric Bana plays a federal agent investigating the decades-old death of a teenage girl in his hometown in The Dry trailer.

–Tiger Woods has been seriously injured in a car crash in California. He’s undergoing surgery for leg injuries after having to be removed from the car by the jaws of life.

–Tavi Gevinson‘s essay on the Britney Spears documentary is so, so good. The doc positions society/the media of tearing her down because they were uncomfortable with her expressing sexuality, but did Spears as a teenager really have any control over the image she was projecting? Tavi gets to the heart of why there’s way too much focus on a young girl’s “agency” about her appearance/attitude. “Even young women who are not megafamous have typically picked up on what makes them appear valuable by the age of 15. Their capacity to perpetuate these standards doesn’t mean they are not also victims of these standards.”

–Gerard Depardieu has been charged with rape and sexual assault in connection with a 2018 case involving an actress in her 20s.

–Shailene Woodley confirmed that she’s engaged to Green Bay Packers quarterback Aaron Rodgers, telling Jimmy Fallon: “I never thought as a little girl, ‘Yeah when I grow up I’m going to marry someone who throws balls, yeah!’ But he’s really just so go good at it. I’m very impressed.” She also added “For us, it’s not new news, so it’s kind of funny everybody right now is freaking out over it. We’re like, ‘Yeah we’ve been engaged for a while,'” leading to more questions about the timeline.

-Part of me is confused by these photos of Lucy Hale kissing Skeet Ulrich during a lunch date in L.A., but another part of me totally gets where she’s coming from.

–Drew Barrymore revealed to Howard Stern that her mother placed her in a “full psychiatric ward” for a year and a half when she was 13. “I was going to clubs and not going to school and stealing my mom’s car and, you know, I was out of control…I think after, you know, 30, years of therapy, and a lot of soul-searching and having kids myself, you know, I think she created a monster. And she didn’t know what to do with the monster.”

–George Clooney says his wife Amal will not allow him to go near their daughter’s hair with his Flobee. Smart woman.

-What a shock. The publisher of Woody Allen‘s memoir is facing accusations of a history of workplace toxicity and inappropriate behavior.

-Man, this podcast interview with Ethan Hawke is great. He talks about everything from learning from Philip Seymour Hoffman and Denzel Washington, to joining the MCU,  to Saint Francis of Assii’s quest for sainthood.

-Speaking of HBO, the limited series Beartown premiered last night to strong reviews. I haven’t read the book it’s based on, but I just read that author’s latest (Anxious People) and adored it.

-Superman & Lois premieres on the CW tonight, and THR calls it thirtysomething with superpowers, which intrigues me.

-Ginny And Georgia on Netflix is being promoted as the next Gilmore Girls, but critics are saying it’s more than that.

-Here’s the latest trailer for The Mauritanian. I found this movie really bleak, but Tahar Rahim‘s performance is astounding.

–Adriana Grande posted a sweet selfie with boyfriend Dalton Gomez ahead of her 27th birthday.

–Alia Shawkat‘s new Vulture interview is very, very good. She talks about Brad Pitt, who she was introduced to by Spike Jonze (“We’re not dating. We’re just friends..To [tabloids] it’s like, ‘We don’t get it! This girl is weird! She’s so different! Why are they hanging out?’ You get too close to the prom king, and all of a sudden, everyone’s like, ‘Well, who is this bitch?'”) and she talks about regretting using the n-word when quoting Drake lyrics (“Was I using this because the idea of Black culture seems cool? And I was just like, ‘Well, that’s just part of it!’ It’s not intellectually understanding that the words you use are really powerful. I think that’s a lot of what this reckoning is for all of us who are not Black”).

–Gabrielle Union was photographed by Zaya Wade for SELF.

-I’m very curious about which white producer/showrunner once said she only writes shows about families so she’s not forced to cast POC actors. I have a guess.

–Justin Bieber has filed a defamation lawsuit seeking to collect at least $20 million in damages filed against two Twitter users who alleged in posts on the social network that the singer sexually assaulted them.

–Jason Reitman recruited Hugh Jackman, Tiffany Haddish, Jennifer Garner, Chris Pine, Sophie Turner, Joe Jonas, David Oyelowo, Andy Serkis, Jack Black, Diego Luna, Common, Sam Rockwell, Neil Patrick Harris, Leslie Bibb, Josh Gad, Taika Waititi and a bunch more to help him craft a shot-for-shot remake of The Princess Bride that will be available in chunks on Quibi starting Monday. I saw Reitman’s live-read of TPB at TIFF a couple of years ago, and the video clips in that article make me so excited for this. Guess I won’t be cancelling my Quibi trial just yet.

-Video from THR’s drama roundtable was posted on YouTube. Jennifer Aniston‘s first comment is even more awkward than it was in print, and Janelle Monáe’s rebuttal about “checking your perspective” is even more powerful.

-I’m so glad Scaachi wrote a takedown on Buzzfeed of the movie 365 Days. It’s been trending on Netflix for weeks and it’s so, so bad. The premise is awful, consent is addressed and then promptly ignored, there’s tons of random music drops, and it should have just been subtitled instead of having the actors with English. Plus, it makes no sense that the kidnapped woman would [SPOILER ALERT] fall for her kidnapper in just two months despite his character never being granted a second of vulnerability or softness. There’s an entire genre of romance novels about alpha bad boys being reformed by love — had they just followed the tried-and-true template, it might have been a fun guilty pleasure instead of a rapey mess.

-Due to all the postponements, Cineplex in Canada is scaling back its reopening plans.

-I don’t believe this story about Meghan Markle being done with Jessica Mulroney, but I am surprised it took this long for someone to write it.

–Victor Garber tweeted a photo from Happiest Season, a lesbian romcom starring Kristen Stewart and Mackenzie Davis and directed by Clea DuVall. Get in my eyeballs!

–Kanye West has signed a 10-year deal with Gap. Yeezy Gap promises to deliver “modern, elevated basics for men, women, and kids at accessible price points.” No sneakers, tho.

-Disney announced this week it’s re-themeing its popular Splash Mountain attraction around The Princess and the Frog and retiring its characters from Disney’s notorious “Song of the South.”

–G-Eazy seems to be shading ex Halsey in his new song.

-This is a very good piece on how male victims have been grappling with consequences after speaking out about MeToo, from mockery to job offers drying up.

–Adele won’t be releasing her new album in September, as first rumoured. Come on, we need this!!

-Here’s the trailer for The King’s Man, the prequel to the Kingsman movies.

–Lucy Hale tries to get over her hangups about sex in the trailer for A Nice Girl Like You.