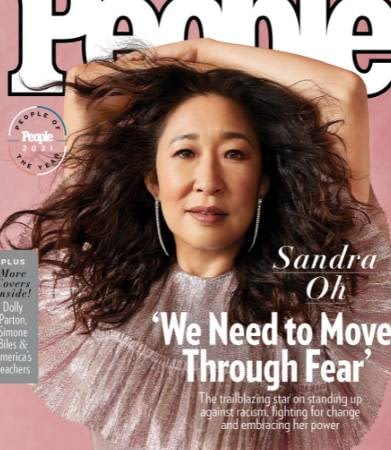 –Sandra Oh has been named one of People’s People of the Year, and talked about inspiring others (“It means so much to me to be on this cover. When I was growing up, I never saw my face on the cover. To be asked to be on the cover is a great privilege, because it normalizes things for my nephews and nieces”) and how her impromptu speech at a Stop Asian Hate rally went viral (“There was a lot of pain and outrage, and when that happens, you need to gather together. That’s the only way to get through. If you’re standing side by side with someone who’s not your gender or not your race, you can go, ‘Okay, we have commonality.’ We need to move through fear”).

–Michael B. Jordan covers THR and talks about growing his empire (“To be young, Black and successful — and disruptive — in this industry, there’s a certain navigation to get to the place I need to get to. And you try to hold that moment and stay in it for as long as you can”) and posting about his relationship with Lori Harvey on social media (“There’s a premeditated planning of staying out of the way [of the public eye] that sometimes kills spontaneity and intimacy. I wanted to take that away and give this the best chance it had, in this weird world that we live in, to be somewhat normal”).

–Ben Affleck talked to Wall Street Journal’s magazine about second chances — both in his career and in his love life. However, he’s trying to create boundaries when it comes to sharing details. When asked about Jennifer Lopez, he said, “You can write conjecture about it, but one of the harder lessons that I have learned is that it’s not wise to share everything with the world. There are some things which are private and intimate and have meaning in terms of their intimacy by dint of the fact that they’re not shared with the rest of the world. I’m more comfortable just learning to find a boundary between things that I want to share and things that I don’t.”

–Alec Baldwin gave an “intense” post-Rust interview to ABC News’ George Stephanopoulos. It’ll air tomorrow, but they released a clip of him tearing up.

-Everyone’s sharing their Spotify Wrapped lists today. In the meantime, Spotify announced that Bad Bunny edged out Taylor Swift for the coveted title of their most-streamed artist of 2021.  This marks the second year in a row for him to get the honour — and he didn’t even release a new album this year.

-Succession’s J. Smith-Cameron says she has “no issue” being a sex symbol. We don’t have an issue with it, either!

–Sandra Bullock was on Red Table Talk and discussed her terrifying home invasion in 2014 (“The violation of that. I wasn’t the same after that, I was unraveling…I haven’t been alone since the day it happened”), and how she told her photographer boyfriend Bryan Randall that she was adopting another child (“We hadn’t been together that long and I go “You remember that NDA you signed when you photographed my son [at the birthday party where we met?] You know that still holds?’ And he said “Yeah, ok, why?’ And is said, “Cause I’m bringing a child home when I come back from Toronto”).

-Four more families have turned down Travis Scott’s offer to pay for the funerals of family members who died at Astroworld.

-Yellowjackets is a new show that seems to be sneaking onto people’s radar. I wonder if it’ll end up on some Best of 2021 lists?

-Speaking of Best of lists, I’m surprise how many movie ones have Drive My Car on them. I gave up on that film an hour and a half in.

-Only Murders in the Building has started shooting season 2!

-Should I start watching the Great British Bake-off? Everyone who does just seems really happy with that decision.

–Michael Sheen gets a glimpse of his bleak future in the trailer for Last Train to Christmas. 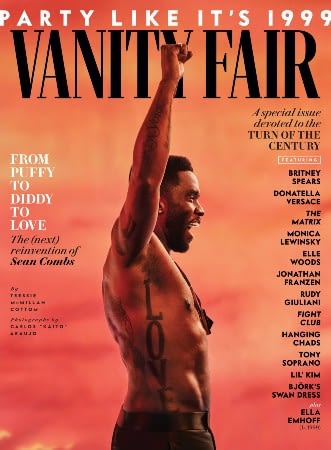