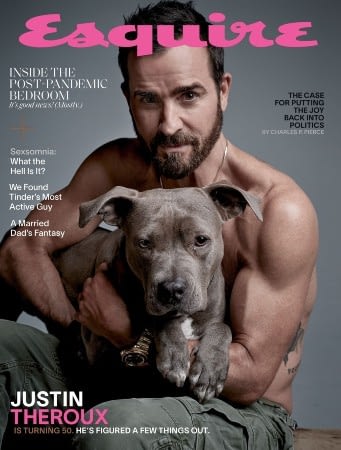 -I feel like a shirtless Justin Theroux cradling his dog on the cover Esquire is just what the world needs right now, ya know? The whole interview is great but the part that’s making headlines is when he talks about his divorce from Jennifer Aniston: “I would say we’ve remained friends. We don’t talk every day, but we call each other…Like it or not, we didn’t have that dramatic split, and we love each other. I’m sincere when I say that I cherish our friendship. We can not be together and still bring each other joy and friendship. Also, she makes me laugh very, very hard. She’s a hilarious person. It would be a loss if we weren’t in contact, for me personally. And I’d like to think the same for her…I think that when you get good at relationships—and here I am, single—if you love the person the same way you loved them in the relationship, it would behoove you to love them the same way out of the relationship. Who wants to take a shit while you’re walking out the door?”

-After a month of speculation, Jennifer Lopez and Alex Rodriguez have officially announced their breakup: “We have realized we are better as friends and look forward to remaining so.”

-According to Us Weekly, they really did try to salvage their relationship for their children’s sake.

–Ben Affleck is looking really healthy and happy on the set of George Clooney’s new movie. Just in case JLo is wondering…

–Cassie Randolph is reportedly “still processing” the news that Colton Underwood is gay. If I were here, I’d be still processing the fact that he allegedly stalked her and put a tracking device on her car. (Which he sort of addressed this week by saying “I made mistakes in the end of that relationship.”)

–Morgan Wallen says “I’ve really worked on myself.” Good for him?

-Casting Pete Davidson to play Joey Ramone is quite the choice!

–Regé-Jean Page’s Bridgerton costar explained his departure from the series. Adjoa Andoh (who plays Lady Danbury) said “We’re following the overriding framework of Julia Quinn’s beautiful novels. There are eight Bridgerton children: one down, seven to go. Season two it’s Anthony Bridgerton so there you are. That’s the arc of the show.”

-The Queen has told members of the royal family to not wear military dress when attending the funeral of Prince Philip.

-Meanwhile, she’s reportedly trying to use strategic seating arrangements to keep Harry and William from fighting.

–Demi Lovato is living with her best friend and loving life. “I was engaged to a dude and almost did that. And I was like, ‘That’s not the life for me.’ I want to have fun and I want to live with my friends. Let’s normalize that, you know.”

–Italia Ricci has landed the lead in Netflix’s The Imperfects. I really like her and haven’t seen her in anything lately beyond Hallmark films, so this is good.

–John Corbett says he will be in the Sex and the City revival in “quite a few” episodes, so I guess the future looks bright for Carrie and Aiden.

-Yikes. Vulture has a piece on how Amazon’s Them is “one of the most anti-Black pieces of pop-culture in recent years.”

-The reviews for Kate Winslet‘s new HBO show Mare of Easttown, which debuts this weekend, is getting rave reviews. I’m glad; it feels like we’re in a TV drought.

-Speaking of good-looking TV, here’s the trailer for Amazon Prime’s The Underground Railroad, from Barry Jenkins and based on the Pulitzer Prize-winning novel by Colson Whitehead. 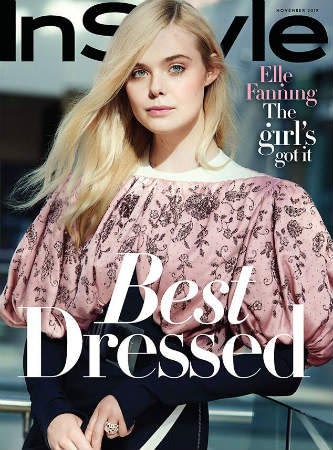 –Elle Fanning claims she had an epic paintball outing with Angelina Jolie: “Oh, she’s aggressive..I had never gone paintballing before. We were in full-on armor. We were the only people in the place, with all of her kids. She and I were not on the same team. I was so bad. I hit their security guard in the neck, and he was on my team! Angelina’s really good.” Pics or it didn’t happen.

–Mariah Carey is writing her memoirs, which I am gonna read the crap out of. She promises it will be packed with revelations: “Born to a black father and white mother. Lived in basically very humble beginnings. Came out of it…And public humiliation and going through the wringer.” The chapters on Tommy Mottola and Nick Cannon will be worth the price of the book alone.

-In other book-y news, Rihanna is launching a “visual autobiography.” Sweet! Who needs pesky words anyway?

-I’m surprised how traditional Hailey Bieber’s wedding dress is. I mean, it’s very lovely, but not what I was expecting from a 22-year-old model.

–Ellen Degeneres is having a very bad day. She’s getting deservedly dragged for hanging out with George W Bush, and this tweet about her terrible reputation is going viral.

-It’s been 10 years since Jim and Pam tied the knot on The Office so EW talked to John Krasinski, Jenna Fischer, Paul Feig, Greg Daniels and Mindy Kaling about the secret ceremony, the last-minute dance, and how a horse almost became the focus.

–Jennifer Aniston told Howard Stern that shortly after divorcing Justin Theroux, she sought a psychologist to work through the breakup after he was spotted with various hot young things. She also said she had dinner last week with the full Friends cast.

-It seems like everyone I know has had a Liam Hemsworth sighting in Toronto this week and it’s my turn, dammit.

-The End of the F$*&ing World is coming back to Netflix on Nov 5. I really loved the first season and I’m not sure it needs another one, but I’m intrigued about where it goes from here.

-I’d never listened to the Thirst Aid Kit podcast before but my god, that Dan Levy episode is perfection.

-I’m not the biggest Marc Maron fan but damn, his take on Todd Phillips’ “woke” comments is perfect.

-Riverdale’s Lili Reinhart will release her first book of poems next spring. If nothing else, we’ll get a hilarious episode of Who Weekly outta this.

-I love that Aaron Paul is doing a Twitter scavenger hunt for premiere tickets to the Breaking Bad movie.

-Also, this video of the cast reuniting for the L.A. premiere made me very happy.

-With the rave reviews A Marriage Story and The Irishman are getting, everyone’s wondering how much money Netflix left on the table by not doing limited theatrical releases.

-Speaking of streaming services being stupid with money, Apple’s deal for Ryan Reynolds and Will Ferrell’s musical A Christmas Carol includes a $60 million price tag just for talent fees.

–Kim Kardashian covers Vogue Arabia, in which she pushes back on the criticism she’s received for pursuing a law degree.  (“There is a misconception that I don’t actually have to study and that I’ve bought my way into getting a law degree – that’s absolutely not true. Being underestimated and over-delivering is my vibe.”)

-If you missed last night’s VMAs, here’s a red carpet recap. And the performance you have to check out is Normani’s Motivation. Twitter LIT UP when she was on. She’s gonna be huge.

-I love that Missy Elliott brought out Alyson Stoner (the little girl from the “Work It” video) to recreate her dance routine last night.

–Justin Theroux went wakeboarding with his The Leftovers costar Ann Dowd and I’m living for it.

-A Bachelor in Paradise contestant didn’t get the memo that the food at their date was just a prop for show only. He still attempted to choke it down, despite his companion’s repeated warnings. “When we get back to the beach and I tell everyone you ate the date food, they’re gonna give you shit. You’re not supposed to eat the date food! I’m trying to help you.”

–Kanye West and Kim Kardashian ate at a Cheesecake Factory two nights in a row and I’ve never related to them more.

-Everyone was making fun of this headline about Eva Longoria directing a Flamin’ Hot Cheetos movie, but the film is actually the story of Richard Montañez, a janitor working for Frito Lay who revitalized the company by inventing the new flavour.

-The owner of Taylor Swift‘s real-life “Cornelia Street” apartment had no idea who she was when he rented it to her. “She walked in, and I’ll never forget this — she said, ‘Oooh, it’s so crafty.’ And in Taylor-speak, that means ‘I like everything.’ She asked if she could rent not just the house but my style as well. So towels and dishes and glassware and furniture and just kind of ‘Take your clothes and go.’ So I did. She was an absolute delight to deal with.”

–Francis Capra (who plays Weevil on Veronica Mars) retweeted this sexist shit and I just can’t.

-On the other end of the spectrum we have Harry Styles, who embraces his female fandom instead of ridiculing it. He says in his new Rolling Stone cover story: “They’re the most honest — especially if you’re talking about teenage girls, but older as well. They have that bullsh-t detector. You want honest people as your audience. We’re so past that dumb outdated narrative of ‘Oh, these people are girls, so they don’t know what they’re talking about.’ They’re the ones who know what they’re talking about. They’re the people who listen obsessively. They f-cking own this sh-t. They’re running it.”

-This fall books preview reminded me that Rainbow Rowell has a sequel to Carry On coming out next month and I cannot wait!

-I am very interested in the new Briarpatch series, mostly because it stars Rosario Dawson and was created by one of my favourite TV critics. The trailer has me hopeful.

-The new trailer for Dickinson, the upcoming Apple+ show in which Hailee Steinfeld plays poet Emily Dickinson, is very confusing. Is she…twerking??

–Timothée Chalamet is a reluctant ruler in the trailer for period piece The King, accompanied by Robert Pattinson in an equally regrettable wig.