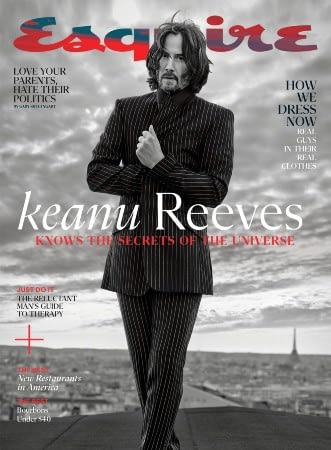 -My only requirement for a Keanu Reeves profile is that it doesn’t ruin the idea I have of Keanu in my mind (which is, admittedly, a high bar). Luckily, his new Esquire profile certainly doesn’t. I love how he repeatedly laughs off the notion that movie making is hard work (“I mean, ‘hard’? Come on, man. We’re making a movie!”),  and won’t complain when he wakes up feeling crappy and sick during his current routine of travel and constant night shoots (“So? Drink some hot tea with some lemon and honey in it. I don’t know. Slap yourself in the face. Stretch. Concentrate, man”). The part that’s going to get the most play is undoubtedly Sandra Bullock’s story about how he once brought her champagne and truffles because she had offhandedly mentioned never trying them — and when he dropped them off she was painting her nails so he let her paint his, too. All in all, the whole article is worth your time — even though the writer describes the upscale Toronto neighborhood of Yorkville as “bohemian.”

-The splits keep coming: Kaia Gerber and Jacob Elordi have reportedly split after a year of dating, and Batsheva Haart and Ben Weinstein of Netflix’s My Unorthodox Life have broken up after nine years of marriage.  As Jezebel says, the end of the pandemic cuffing season for famous people is here.

-Bucking the trend are Jaden Smith and Phoebe Dynevor, who may be dating. The age difference seems big but she’s actually only 3 years older.

–Adele hosted another televised special — this time in the UK, and the audience was even more celeb-packed than the US one. Stars in the crowd included Idris Elba, Emma Thompson, Hannah Waddingham, Emma Watson, Bryan Cranston, Mel B, Naomi Campbell, Josh Gad, Samuel L Jackson and Richard E Grant.

-My favourite part was when Emma Thompson was urging everyone around her to get up and dance. I have been that person at concerts…

-Another great moment was when Adele’s former English teacher surprised her.

–Britney Spears praised Lady Gaga for speaking out on her behalf and chided Christina Aguilera for refusing to do the same. Everyone’s blaming Xtina’s publicist, but look at her face before he even jumps in — this was clearly a “no-go” topic.

–Taylor Swift has topped both the Billboard 200 album chart and the Hot 100 singles chart. Say what you will, but she’s managed to dominate the charts with songs that are a decade old.

-Meanwhile, there’s renewed chatter that Jake Gyllenhaal runs the Instagram account of a cat named Ms. FluffleStiltskin, who has started scolding about cyberbullying.

-This is neat: Jane Campion used a Jungian dream coach – who is also Sandra Oh‘s mentor – to put the unconscious on screen in The Power of the Dog.

–Ridley Scott is blaming The Last Duel bombing at the box office on apathetic millennials. “What it boils down to [are] the audiences who were brought up on cell phones. The millennian, [who] do not ever want to be taught anything unless you told it on the cell phone. This is a broad stroke, but I think we’re dealing with it right now with Facebook. This is a misdirection that has happened where it’s given the wrong kind of confidence to this latest generation, I think.” There’s a few reasons I didn’t see it in theatres, and they had nothing do with age: the marketing and trailers were abysmal, Matt Damon was promoted much more than Adam Driver and Jodie Comer, I’m still not back to my full in-person theatre-going schedule, AND I had zero desire to watch the same sexual assault repeatedly play out from different perspectives. But go off, I guess.

–Oscars’ best-actor category is shaping up to be this year’s stiffest competition, with Will Smith, Andrew Garfield, Leonardo DiCaprio, Benedict Cumberbatch, Joaquin Phoenix, Bradley Cooper and Mahershala Ali all being bandied about already.

–Jason Reitman’s reboot of the Ghostbusters franchise made a respectable $44 million from 4,315 theaters this weekend.

–Eddie Redmayne is courting controversy yet again by playing the Emcee in Cabaret — a character that is often played by LGBT actors. While he admits past mistakes (“I made The Danish Girl with the best intentions, but I think it was a mistake”), he says of his new role “Of all the characters I’ve ever read, this one defies pigeonholing. I would ask people to come and see it before casting judgment.”

-We Are Lady Parts has (finally) been renewed for a second season at Peacock. The first 6-episode season was a blast.

-This is a really good example of how dark and grimy TV looks nowadays. It’s everywhere!

-Three autistic roommates try to conquer their fears in the trailer for As We See It, from This Is Us creator Jason Katims.

–Taylor Swift, Jennifer Aniston, Jennifer Lopez and Michelle Obama all grace People magazine’s People of The Year issue. Swift talks about learning to deflect rude questions (“The more women are able to voice their discomfort in social situations, the more it becomes the social norm that people who ask the questions at parties like ‘When are you going to start a family?’ to someone as soon as they turn 25 are a little bit rude. It’s good that we’re allowed to say, ‘Hey, just so you know, we’re more than incubators'”), Aniston says she remains open to love (“Even when it’s scary, even when it hurts. It’s always going to be worth it”), Lopez talks about wanting more kids (“I don’t know that it’s in God’s plan but I would like to try. I’m so open to it!”), and Obama recalls getting “a little emotional” when dropping off Sasha at college (“We were there, just like most parents, helping her unpack and make her dorm room feel like home”).

–Emma Stone is engaged to SNL writer Dave McCary, who she’s been dating for over two years. I dig her pearl engagement ring.

-It’s very weird that Justin Timberlake broke his silence and apologized for being spotted getting flirty with his costar nearly two weeks after the photos first surfaced. Everyone had pretty much forgotten about it before he dragged it back into the spotlight. It’s also weird that he doesn’t apologize to his costar, who social media deemed a homewrecker. He does, however, manage to squeeze in a plug for their new movie, so I guess there’s that?

–Jason Derulo is still talking about the fact that Instagram took down his dick pic — and wants us all to know that he was only “semi-aroused…an arousal looks different. It’s a different vibe. It’s a different beast. It leans more to the front, you know what I mean?” I can’t believe this story won’t die.

-The trailer for the new season of Legends of Tomorrow features a Mister Rogers spoof. God, I love those weirdos.

–Harry Styles showed off the vinyl set for his sophomore solo album Fine Line, and the liner notes feature a completely nude photo of the singer. So I guess we’re all buying record players, huh?

–Tim Allen was on The View last week and complained about political correctness. “I grew up on Richard Pryor; you can’t even go back and talk about the book he wrote. You know, what I got to do sometimes sometimes is explain – which I hate – in big arenas, that this is a thought police thing and I do not like it. But when I use these words, this is my intent behind those words. So as long as you know my intent… I still get people who say, ‘Just don’t say it.'” Listen to those people, Buzz Lightyear.

-Is anyone having a hotter streak than Florence Pugh right now? The only person I can think of that comes close is Lakeith Stanfield.

-A disguised Alanis Morissette and Jimmy Fallon took to the New York City subway to busk. People seemed to catch on pretty quickly it was them.

-This is a very lovely joint interview with Rose Byrne and Bobby Cannavale. They talk about costarring together (“It starts out as a very pragmatic thing. You have the kids, the kids are getting bigger, and you don’t want to spend the time apart”), and how they’re currently living in Trinity-Bellwoods (which Cannavale calls the Brooklyn of Toronto).

–Penn Badgley has some strong thoughts about Los Angeles in the YOU season two teaser.

-The second trailer for Mulan has landed.

–Julia Garner stars in the trailer for the Weinstein-based thriller The Assistant, playing a composite character based on public records, documents, and original interviews.