Happy news from @priyankachopra, who shared on Instagram that she and @nickjonas have welcomed a baby via surrogate: pic.twitter.com/7sMpOd7KYz

–Adele posted a tearful video about cancelling her Vegas residency the day before she was set to start. “We’ve tried absolutely everything we that can to pull it together in time, and for it to be good enough for you, but we’ve been absolutely destroyed by delivery delays and COVID… half my team and half my crew are down with COVID they still are and it’s been impossible to finish the show.” It’s a heartbreaking video but god, I hope she figures out a way to make it up to the fans who’d already travelled to Vegas for this weekend’s show. She’s clearly there already so I wonder if she could host an event for any ticket holder who can prove they booked their hotel before she made the announcement or something?

-Another rough day in celebrity deaths. Singer Meat Loaf has died at aged 74, while comedian Louie Anderson has died at 68 following a battle with cancer.

-Covid keeps screwing up Tom Cruise‘s plans. Mission: Impossible 7 & 8 have both been delayed to 2023 and 2024, respectively.

–Jennifer Coolidge told Jimmy Fallon that Ariana Grande doing an impression of her on his show helped her career. The actress, who starred in Grande’s “Thank U Next” music video, shared, “You should know, it was sort of the beginning of a lot of cool things that happened for me. I was going through a dead zone, not much was going on. Then Ariana did this imitation on your show and you encouraged her. And then this ball got rolling.”

–Cynthia Nixon responded to Chris Noth’s removal from the finale of HBO Max’s And Just Like That following allegations of sexual assault. “I think we were very lucky that those changes were able to be made. And I think we are very proud of our show.”

-Speaking of And Just Like That, Sarita Choudhury (who plays Carrie’s real estate agent Seema) says she was “shocked” by the flak the show got.

–Whoopi Goldberg is back in the trailer for Star Trek: Picard’s second season.

–Bill Paxton’s family can seek punitive damages against Cedars-Sinai in a wrongful death suit. The late actor’s family claims the hospital and his doctor covered up their negligence by not performing an autopsy and they didn’t learn one hadn’t been done until after the actor had been cremated.

-Um, should I be watching Peacemaker? ‘Cause this clip of Adrian Chase/Vigilante is amazing (and not cause it stars the cute guy from Bridgerton and UnREAL).

-Sony has yet to secure a date for Spider-Man: No Way Home in China, but the country will allow Woody Allen’s recent romcom a release.

–Will Forte returns to his SNL roots in the promos for this weekend’s show.

–Jesse Eisenberg’s directorial debut, When You Finish Saving the World starring Julianne Moore and Finn Wolfhard, is getting good reviews out of Sundance.

-Apple TV’s “Everyone but Jon Hamm” commercial is cute.

–Sam Claflin plays a stodgy author whose book becomes a bestseller in Mexico when the translator (Verónica Echegui) rewrites it in Amazon’s Book of Love, which debuts Feb 4. 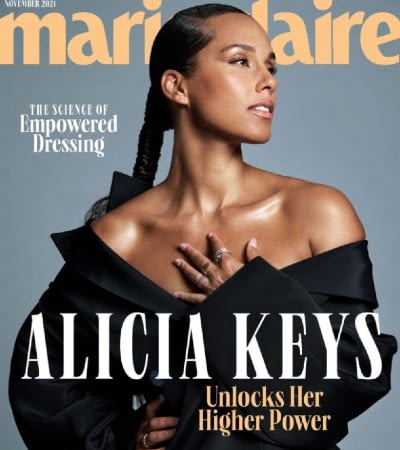 –Alicia Keys appears on the cover of Marie Claire and talks about struggling during the pandemic (“Everybody was like, ‘Are you just so creative because you have all this time in the house?’ I was like, ‘No, actually. I do not feel like that at all.’ I didn’t even know how to work. What was I supposed to work on? Where was I supposed to work? And when? It was so much of making sure everything was organized and the kids were good”), being an art collector (“Every room in this house has a beautiful Black face. When my kids walk in this house, they look on these walls they see their beautiful Blackness and it is normal. That does give you a certain sense of validation or belonging”), and creating a new beauty brand (“It’s about this idea of nurturing your soul and honoring yourself and starting to create rituals and opportunities for you to connect with yourself”).

–Aaron Sorkin is defending Being The Ricardos since its backlash over casting, and he’s comin’ in hot! He tells THR: “I want to tell you my opinion on this and I stand by it, which is this: Spanish and Cuban aren’t actable, OK? They’re not actable. By the way, neither are straight and gay. Because I know there’s a small movement underway that only gay actors should play gay characters. Gay and straight aren’t actable. You could act being attracted to someone, but most nouns aren’t actable.”

–Adele says she’s grateful that she became friends with her neighbors Nicole Richie and Jennifer Lawrence. “They humanized me because I had avoided talking to anyone that was ever famous in any capacity, because I was like, ‘Well, I’m not famous.’ I’m very British like that.”

–Matthew McConaughey is clarifying that he did not say he’s against vaccinating kids, posting on Instagram: “When asked my opinion on the subject of children and vaccination mandates I stated, ‘I couldn’t mandate it for kids just yet.’ What was not clear is that I was referring specifically to the 5-11 year old mandate. What is NOT true, and insinuated with the clickbait headlines since, is that I am against vaccinating children at all. This is false. In fact, our eldest 13-year-old son Levi is fully vaccinated for COVID-19.”

-While appearing on Colbert’s show, Aubrey Plaza dressed like a witch and offered her thoughts on her past costars. She said Kristen Stewart “smells like cinnamon and gasoline,” Molly Shannon is “one of the most legendary living con artists alive today” and credits herself for Michael Caine‘s retirement announcement “Once you experience the best you got to wrap it up.”

-Meanwhile, there are reports that Travis Scott attended a Dave & Buster’s party immediately after Astroworld, and Drake went to a strip club the following night. There are also lots of questions being raised about Scott’s partnership with BetterHelp following the tragedy.

-I have no interest in paying for Twitter Blue, but if I did, it would only be because they used Meg Stalter to promote it.

–Lizzy Caplan needs to be a bigger star. I’m not sure if this Paramount+ remake of Fatal Attraction is going to do it, but I’m rooting for her.

-While promoting Licorice Pizza, director Paul Thomas Anderson reflected on the theatre industry and cemented my love for him. “I’m not going to lie — there’s been a couple of moments where I thought the sky was falling. The theatrical exhibition industry had a much-needed and long-coming kick in the pants, didn’t it? They built 25-plexes and 30-plexes and all that kind of stuff, and it got bigger and bigger and shittier, and you know what, you’re shocked that they’re empty? Well, what did you think was going to happen? They built these pyramids for their demise.” And when asked if minds if people stream his movies, he replied, “Not at all. I don’t mind if people discover my work that way. I’m counting on it long after I’m gone.”

–Meghan Markle responded to new claims that she knew her father would leak her personal letters.