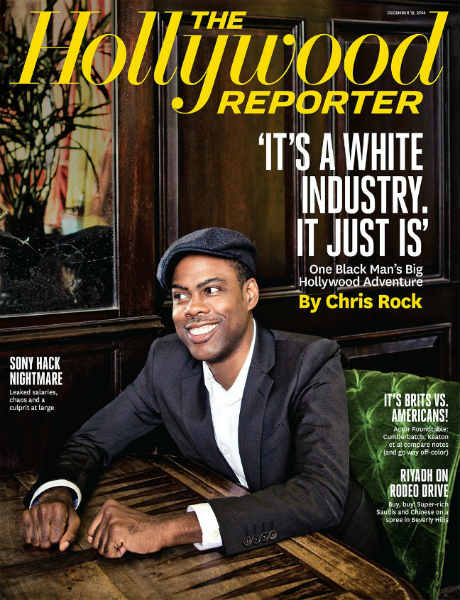 –Chris Rock is on FIRE this week. First came his New Yorker interview, and now he penned an essay for the Hollywood Reporter and it’s a must read. Here’s a taste: “How about True Detective? I never heard anyone go, “Is it going to be Amy Adams or Gabrielle Union?” for that show. I didn’t hear one black girl’s name on those lists. Not one. Literally everyone in town was up for that part, unless you were black. And I haven’t read the script, but something tells me if Gabrielle Union were Colin Farrell’s wife, it wouldn’t change a thing.” Seriously, go read it right now. I’ll wait.

–Eva Mendes talked about why she and Ryan Gosling stayed mum about her pregnancy for so long. (Mostly: it was none of your business.)

-It’s probably not a good sign with even People magazine is speculating that things between Johnny Depp and Amber Heard are cooling off.

-In other cover stories, Bradley Cooper speaks about his struggles with addiction in the new Vanity Fair.

-I don’t understand what kind of studio would upload a trailer for Jay Baruchel’s new movie and geo-block it from Canadians. Don’t they know we’re his peeps?

-This is weird, totally unexpected new: Source Code is getting a sequel. I really, really liked that movie but it made about $3 at the box office.

-I’m not sure this is Anna Kendrick’s best colour, but I dig the clutch.

–Rosario Dawson has adopted a 12-year-old girl. (Also, how did I not know she used to date Danny Boyle?!)

-Speaking of TV superheroes, Stephen Amell did a Facebook video Q&A and talked about how you should approach him in public. (TL;DR: it’s all cool, but be respectful if he’s with his baby. “If I’m out in public, it’s not like I shouldn’t expect it. Celebs who do that are assholes.”).

-Also, part one of the Flash/Arrow crossover was amazeballs. High hopes for tonight’s!

-Speaking of last night’s TV, I don’t watch Sons of Anarchy but everyone on my Twitter TL was freaking out over this scene.

–Tom Cruise really needs to figure out that whole ‘they drive on the other side’ thing while filming in London.

–Meryl Streep had a Thanksgiving kitchen emergency so she ended up using neighbor Gwyneth Paltrow’s oven.

–Jay Z surprised Beyonce with a kiss on stage. Her face in this photo is EVERYTHING!

–Miley Cyrus tweeted a screengrab of a text conversation with someone named Fefe (please let it be Dobson!) in which she talked about taking Xanex.  She then claimed she accidentally “butt-tweeted” it. How exactly does that happen?

-Meanwhile, Miley is getting the documentary treatment. I really hope it includes lots of footage of twerking and her extensive grillz collection! (Oh wait. I don’t.)

–Justin Bieber is in Toronto today (blerg), and he was caught spitting on his fans from a hotel balcony. Such a charmer! (CP24 had INSANE video of teen girls running after his SVU this morning. It was gross.)

-Meanwhile, he left fans waiting an hour for his first show. This kid gets better by the day.

-Also, he says he’s been “blessed” by the Toronto Maple Leafs.

-Jay Baruchel (who I kind of fell in love with in This Is The End) has been named honorary captain of the Montreal Canadiens.

–Garrett Hedlund has passed on playing Christian Grey in the film adaptation of Fifty Shades Of Grey. I’ve never liked him more.

–Avril Lavigne shared some photos from her new music video. Is that Winnie from The Wonder Years?!

-The trailer for the TLC biopic has landed.

–David Cross and Amber Tamblyn made a funny new P.S.A. about reproductive rights.

-Meanwhile, Prince Harry was adorable talking about the royal baby.

-The co-creator of The Simpson, who’s terminally ill, is giving away his fortune.

-Another movie star is heading to the small screen. Philip Seymour Hoffman has signed on for a Showtime comedy pilot.

–Rosie Huntington-Whiteley is wearing a scarf as a dress. That’s not an exaggeration.

-Here’s the new Romeo And Juliet trailer. The only redeeming thing about it is Chuck Bass! It’s probably wrong to be rooting for Tybalt, right?