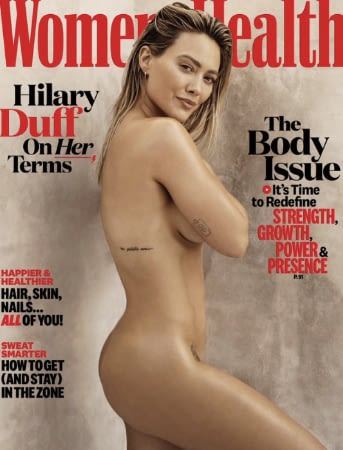 –Hilary Duff looks amazing on the cover of Women’s Health and good for her, but it’s ridiculous that the magazine is positioning this cover as her no longer “trying to live up to Hollywood’s standards” — especially because in the interview she talks about working with a personal trainer for months before the photo shoot! She also says the Lizzie Maguire reboot stalled because TPTB at Disney got “spooked” that the show would have a more adult tone: “She had to be 30 years old doing 30-year-old things…She didn’t need to be doing bong rips and having one-night stands all the time, but it had to be authentic.”

–Dua Lipa covers the new issue of Vogue, and talks about releasing her album in the middle of the pandemic (“I didn’t get to see people’s reaction to the album in real life. So being on tour and seeing the crowds is like, ‘Oh, it was a really big album’ “), and getting more comfortable on solo ventures (“The next chapter of my life is about truly being good with being alone. Some people on the internet were like, ‘Oh, Dua went out for dinner on her own, blah blah, I do this all the time.’ And I think that’s amazing if you do it all the time. You must be so confident. But it was a big step for me. I was nervous—like, what am I gonna do? I don’t want to be on my phone. I want to know I can just be there for myself, you know?”).

-In her new People cover story, Selma Blair says her alcohol addiction started when she was just seven years old. “I don’t know if I would’ve survived childhood without alcoholism. That’s why it’s such a problem for a lot of people. It really is a huge comfort, a huge relief in the beginning. Maybe even the first few years for me because I did start really young with that as a comfort, as my coping mechanism.”

–Bella Hadid said in Interview magazine about her Met Gala appearance, “I literally, like, blacked out. I don’t even think I got one good photo on the red carpet.” But now she’s clarifying that she didn’t mean that “literally” literally.

-Here’s what Netflix wants from creators right now: a female Jack Ryan, a new New Girl, or a fresh riff on The Voice — but no “sad coms.”

–Harry Styles discovered the difficulties of working with babies in this behind the scenes footage for the “As It Was” video.

-I didn’t see this coming, but I love it: there’s sequel to A Simple Favor in the works, with Blake Lively and Anna Kendrick both set to return.

-I’m glad to see all the positive reviews that are pouring in for the new season of Hacks.

-The author of Percy Jackson has slammed the racist backlash against Leah Jeffries, the young actor who is set to play Annabeth in the upcoming series. This is an excellent clapback to a toxic fandom.

-Following an online petition, James Hong got a star on the Walk of Fame yesterday. “I want to thank all the fans and friends who donated their money. It boggles my mind to think that there’s enough people out there who would do that,” he told Variety. “I don’t know who they are, so I’ll just have to thank them through your article.”⁠