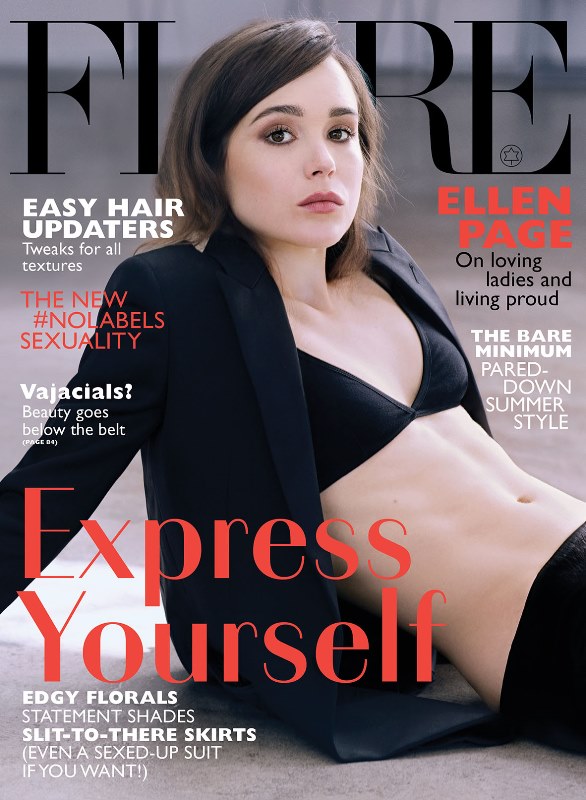 -I usually hate it when women look like they forgot their shirt on magazine covers (“Oh dear, would you look at that bare bra? Silly me!”), but Ellen Page manages to own it on the latest issue of Flare. The interview is great, too.

–Will and Kate‘s third wedding anniversary was dampened by news that Prince Harry and Cressida Bonas have split.

–Emma Stone did a lip sync battle with Jimmy Kimmel last night. I was worried about her chances when she started with a Blues Traveller song, but then she KILLED it on “All I Do Is Win” by DJ Khaled. This is John Kransinski-levels of lip sync awesomeness!

–Miley Cyrus‘ story about her health scare doesn’t really add up. Since when do antibiotics cure a flu virus?

-There have been lots of rumours floating around about Lea Michele feuding with Glee costar Naya Rivera (and possibly sleeping with her ex-finacé). Now comes rumours that Naya has been fired from the show.

–Cameron Diaz can’t wait to get her hands on Drew Barrymore’s new kidlet.

-Meanwhile, Cameron revealed she’s “been with a lady” in the bedroom. Shh, sweetie. Your movie is already No. 1 at the box office. You can stop selling now.

-Grab something sturdy and hang on tight: Kim Kardashian and Kanye West will be married by the end of the week.

-Here’s everything you ever wanted to know about George Clooney’s fiancée, Amal Alamuddin. Excuse me while I go eat my weight in ice cream.

-We finally have a trailer for In Your Eyes, the film Joss Whedon Beyonce-released on us last week.

-I loved Belle when I saw it at TIFF and I think Gugu Mbatha-Raw as the potential to be a huge star, so I can’t fathom what led her to wear this at her first big premiere. Hate the colour, hate the fit, hate the material.

–Miranda Kerr is boobalicious on the cover of Vogue Taiwan.

-Promising: Yahoo! ordered a new space sitcom from the creator of Freaks and Geeks.

–This photo of the first table read with the cast from Star Wars Episode VII just made the interwebs asplode. The new cast members include Oscar Isaac, John Boyega, Daisy Ridley, Adam Driver, Andy Serkis, Domhnall Gleeson and Max von Sydow. Despite a worrying lack of ladies, there’s some good here (I’ve been waiting for Boyega to hit it big since Attack the Block). I am bummed that the rumoured casting of Jesse Plemons or Lupita Nyong’o didn’t pan out, but on the flip side, no Zac Efron (despite — or maybe because of — his hints to the contrary).

-This is why I will never, ever unfollow Ewan McGregor on Instagram.

-What a mess: Rumour has it the Weinsteins might ditch Nicole Kidman’s Grace of Monaco before its Cannes premiere.

–Craig Ferguson announced his departure from The Late Late Show. He later explained that it had nothing to do with not getting Letterman‘s spot, and that he seriously considered leaving two years ago. Watch his brief farewell announcement here.

–Chrissy Teigen gives me yet another reason to be skeezed out by airplane blankets.

-Chanel released a behind-the-scenes video from Kristen Stewart’s new campaign. I kind of hate all the looks, but I do like that she calls Karl Lagerfeld “an incredibly creative and voracious liver.” Wut?

–Robert Pattinson dropped out of a film because of scheduling issues and a lack of prep time.

-Perfect human being John Green talked about Shailene Woodley’s audition for The Fault In Our Stars: “I watched and it was perfect. It was Hazel. She sounded like Hazel.”

–Paul Rudd and Amy Poehler are adorable in the trailer for their rom-com parody They Came Together. It’s from the Wet Hot American Summer crew so I’m down.

–Lena Headey calls that funeral sex scene from GoT “a controversial moment” and “very messy,” but she seems to be leaning towards the consensual side.

-I remain in shock and disbelief how much the Godzilla trailers make me want to see this thing. Damn you, Cranston!