–Gigi Hadid talked about her pregnancy on Jimmy Fallon’s show. “Obviously we wished we could have announced it on our own terms. We’re very excited and happy and grateful for everyone’s well wishes.”

-In other Gigi Hadid news, she and sister Bella are on the new covers of Vogue Paris.

–Drake may be stuck inside his home in Toronto, but he’s still getting stuff done. He dropped a surprise 14-track mixtape and announced his next studio album will be released this summer.

-The Parks and Rec reunion was everything I hoped it’d be and more. It was the perfect example of why fan service can sometimes be exactly what you need. And I’m going to have “Bye Bye Lil’ Sebastian” stuck in my head for days.

-There was a Fresh Prince cast reunion and Will Smith got a little teary watching clips of Uncle Phil.

–Anderson Cooper shared photos of his new son on Instagram.

-I want this article about what’s on famous people’s bookshelves updated every week, please!

-It was a sweet gesture but if I were about to do a job interview over Zoom and Meghan Markle popped in to wish me good luck, I would get so flustered that I’d totally bomb that interview.

-Meanwhile, Meghan Markle lost her first legal battle in ongoing lawsuit against the Mail on Sunday.

–Victoria Beckham has reversed her decision to furlough her staff of 30 at her fashion label and will keep paying them. I should hope so.

–Nick Cordero‘s wife and child are living in Zach Braff’s guesthouse as the Broadway star battles severe covid side effects that required his leg to be amputated.

-Madonna says that she tested positive for coronavirus antibodies, posting on Instagram “So tomorrow, I’m just going to go for a long drive in the car, and I’m going to roll down the window, and I’m going to breathe in the COVID-19 air. Yup. I hope the sun is shining.”

-I’m intrigued by Amazon’s new show Upload, which dropped today. And only 70% because it stars Robbie Amell.

-I watched Michaela Coel‘s Chewing Gum, which was both hilarious and confusing. Her new HBO show I May Destroy You looks intense.

–Brad Pitt made a 12-second appearance on John Krasinski‘s web show and it’s all anyone can talk about. (Fastforward to the 7-min mark.) The power!

-Meanwhile, Alia Shawkat of Arrested Development fame was spotted riding her bicycle over to Brad Pitt’s gated community on her birthday this weekend. But everyone’s still insisting they’re just friends.

–Robert Pattinson and Suki Waterhouse are still going strong and are isolating together.

-In advance of Friday’s hearing against the Associated Newspapers, Meghan Markle‘s lawyers laid out their charges of invasion of privacy and copyright infringement against the Mail on Sunday. Meanwhile, she and Prince Harry sent letters to various British tabloids, making it clear they would no longer deal with them.

–Cole Sprouse had a rough weekend. He took to his Instagram Stories to yell at fans who doxxed him and speculated about his relationship status with Kaia Geber.

–Eva Mendes explained to an Instagram commenter why she doesn’t post pictures of her life with Ryan Gosling: “Since my children are still so little and don’t understand what posting their image really means, I don’t have their consent. And I won’t post their image until they’re old enough to give me consent. As far as Ryan and I, it just works for us this way, To stay private.”

-Did you miss the One World: Together At Home extravaganza on Saturday night? Here are some of the best performances.

–Ryan Reynolds and Hugh Jackman are burying the hatchet on their “feud” for charity. The winner will have them to fly to their house and set up a lemonade stand with them.

-The cast of Chuck reunited on Zoom for a table read of an episode from season 3.

-Speaking of fun Zoom reunions, the cast of That Thing You Do did a rewatch party.

-Stumptown stars Cobie Smulders and Jake Johnson reunited on Instagram, and she sang “Let’s Go to the Mall” from How I Met Your Mother.

-Angel star J. August Richards came out as gay during in an Instagram chat today with Sarah Wayne Callies, his co-star on the new NBC show Council of Dads. “I knew that I could not portray this gay man honestly without letting you all know that I am a gay man myself…and I’ve never done that with the people that I’ve worked with.”

-There are rumours that Marvel is planning a virtual Hall H on the Saturday of Comic-Con to release trailers and really all studios should be doing this.

–Issa Rae and Kumail Nanjiani‘s The Lovebirds, which was supposed to premiere in theatres on April 3, just got a Netflix release date instead: May 22.

–Tom Hanks and Rita Wilson opened up about the intense coronavirus symptoms they were dealing with and it sounded horrible.

–Oprah‘s TV doctors keep screwing up when it comes to covid-19.

–Ashton Kutcher and Mila Kunis announced a partnership with Stephen Amell‘s Nocking Point to sell “Quarantine Wine,” with 100% of profits going to four different covid-19 relief charities. I wish when celebrities sat in their mansions and urged fans to buy things/donate to charity, they’d start by telling us how much they’ve donated or what material thing their doing with their wealth to also help. That would make these things so much more palatable. This is PR 101.

-I don’t know why this old Jesse Eisenberg interview made the rounds on Twitter again this weekend, but I will watch it whenever it crosses my timeline. His “hey, you’re on my time” makes me double take every time, even though I know it’s coming.

-The honest trailer for Cats is honestly delightful. 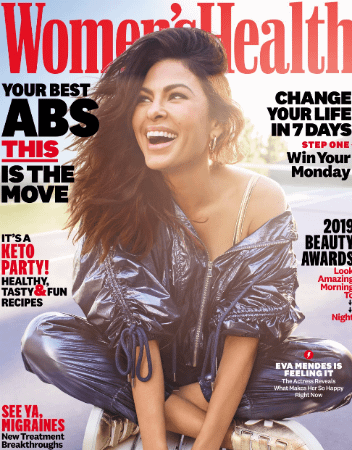 -In her new interview with Women’s Health, Eva Mendes says she hadn’t really considered motherhood until she met Ryan Gosling. “It was the furthest thing from my mind. Ryan Gosling happened. I mean, falling in love with him. Then it made sense for me to have…not kids, but his kids. It was very specific to him.”

–Jimmy Kimmel organized a Game of Thrones hotline to help confused fans — with the show’s stars manning the phones.

-Meanwhile, Kit Harrington is not here for any GoT hot takes. “Whatever critic spends half an hour writing about this season and makes their [negative] judgement on it, in my head they can go f*ck themselves.”

–Ariana Grande had a lucrative weekend. She was reportedly paid $8 million to perform at Coachella.

-I don’t know how it took this long for Warner Bros to start having reservations about Johnny Depp, but I’m here for it.

-Amazon has lured John Cusack to the small screen for their adaptation of the Gillian Flynn thriller Utopia.

–Russell Crowe is unrecognizable as Roger Ailes in The Loudest Voice teaser.

-Leaked Avengers: Endgame footage has hit the internet and people are really bummed out about it.

-Meanwhile, the final trailer reviews the origins of all the heroes and is sure to hit you square in the heart guts.