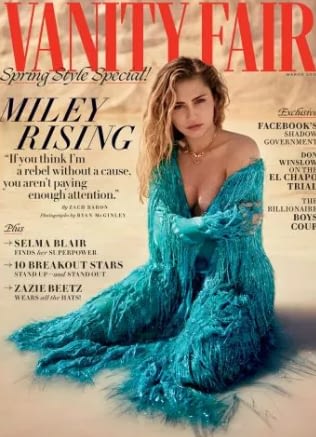 -In her new Vanity Fair cover story, Miley Cyrus talks about her marriage to Liam Hemsworth (“I think the reason we got married isn’t old-fashioned — I actually think it’s kind of New Age. We’re redefining, to be f**king frank, what it looks like for someone that’s a queer person like myself to be in a hetero relationship”), reveals that she felt “anger, relief, sadness” when they lost their mansion to the Malibu wildfires last year, and says her new music will have more of a “hip-hop-leaning” vibe.

–Jussie Smollett is being removed from the final episodes of Empire left to shoot after his arrest. Empire’s executive producers released a statement saying they “care about him deeply” but will keep him out of the show while the legal process plays out.  Meanwhile, police said that Smollett was unhappy with his salary, and that was why he did it but according to sources close to the show, Smollett never expressed dissatisfaction with his $100,000 per episode salary.

-The Vanity Fair Oscar party used to be the hottest bash of the year. What happened? According to the NYT: “The party has been stretched and stretched. It used to be a special insider event. Now it’s a weeklong corporate branding-palooza.”

-Today’s anonymous Oscar ballot piece has a tangent about banging Buzz Aldrin so there’s that.

-I very much enjoyed this oral history of Hugh Jackman’s opening number at 2009’s Oscars. I forgot how wonderful it was, and I had no idea that Dan Harmon and Ben Schwartz were behind it.

-Meanwhile, this is a great deep-dive ranking of every modern Oscar ceremony to determine what a watchable Oscars even is.

-Desus & Mero spoofed Green Book on their show’s premiere last night and it was great.

–Jenna Dewan teamed up with Step Up: High Water star Jade Chynoweth to dance to “Taki Taki” and now I just want to go home and watch all the Step Up movies again.

–Ariana Grande made nice with Piers Morgan and people are not into it.

-I find it so odd that Netflix plays the “we might cancel this” every year with One Day At A Time. I don’t watch it, but it regularly lands on critics’ best of the year lists and people love it. Why is it the only show they treat like this publicly?

Fleabag’s new season is already airing in the UK and critics are calling the first episode an actual masterpiece. I need it in my eyeballs!

-I really feel like I need to start watching The Magicians after the reaction from last night’s episode, which apparently turned a slash couple into canon? I feel like it’s one of those shows no one reviews (maybe because it’s genre and no one take that very seriously?), but every critic I follow tweets about how much they love it. This pop culture-referencing scene has already sold me on it.

-Speaking of shows I don’t watch but everyone I follow seems to love, the future of Wynonna Earp is in jeopardy as production seeks funding for season 4.

-How To Get Away With Murder’s Charlie Weber and Liza Weil have split after three years of dating.

–Scott Foley and Lauren Cohan‘s new ABC show Whiskey Cavalier is only getting medium reviews but I’m still into it.

-Barry considers revealing his hit man activities in the trailer for season 2.

–Elisabeth Moss taps into her inner rock-star in the trailer for Her Smell.