-The summer of quickie celebrity weddings continues! Nick Jonas and Priyanka Chopra are reportedly engaged after just two months of dating. And he apparently closed down Tiffany’s to get her engagement ring like he’s goddamn Patrick Dempsey or something…

-A new Ronan Farrow exposé is coming later today, and it’s set to be a biggie. CBS CEO Leslie Moonves, one of the most powerful men in Hollywood, is being accused of sexual misconduct. While THR suggests the investigation alleges unwanted kissing and touching, Farrow suggested the claims in the full story may be more explosive, tweeting: “A quick reminder that I don’t comment on reporting I haven’t published, and if you’re reading about my work from secondary sources you’re often not getting the full or correct story—especially in cases where parties have an interest in downplaying or otherwise spinning.”

–Anna Wintour’s final Vogue cover will reportedly be Beyoncé, which is a pretty great way to bow out.

–Roseanne Barr doubled down on her race excuse in her Hannity interview. Sigh.

-Today’s Star Wars: Episode IX cast announcement revealed that Mark Hamill would be back (did anyone doubt it?) confirms Billy Dee Williams’ return, added Richard E. Grant and Naomi Ackie to the cast, and most surprisingly, announced that it will use unreleased Carrie Fisher footage. They also didn’t mention Keri Russell, but she’s still involved.

-Los Angeles County prosecutors have concluded there is insufficient evidence to charge Gossip Girl Ed Westwick with rape stemming from those earlier allegations from three women.

–Britney Spears serenaded Jimmy Fallon with “I’m Not a Girl, Not Yet a Woman” in a new episode of Ew!  She looks really, really good.

–Sarah Jessica Parker sat down to chat with Gwyneth Paltrow on her podcast, in which they talked about marriage and Cynthia Nixon running for governor.

-It was a good week for white actresses to be woke on Instagram. Anne Hathaway posted an impassioned response to Nia Wilson‘s murder on Wednesday (“We must ask our (white)selves- how “decent” are we really? Not in our intent, but in our actions? In our lack of action?”), and Minka Kelly defended costar Anna Diop, who left Instagram due to racists.

-The new season of Orange Is The New Black dropped today to mixed reviews.

-BBC Radio 1 canceled an interview with Logan Paul, saying it “didn’t meet our standards.” I’ve actually unfollowed Chloe Bennet on Insta because her stories are all about him cuddling her dog, and I just can’t.

-I love that everyone is pointing out that Amy Adams’ character on Sharp Objects is the worst reporter ever.

-I’m feeling Jennifer Garner‘s opinion of camping in the trailer for her upcoming HBO comedy.

–Tom Cruise made James Corden jump out of a plane and this entire video is amazing. Look, if you need to skydive in order to goose your talk show’s ratings, you couldn’t ask for a better cheerleader than Cruise. 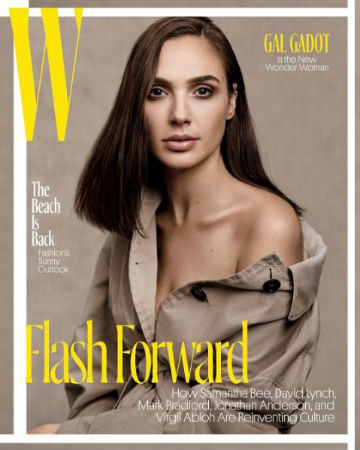 –Gal Gadot‘s hair looks oddly cropped on the cover of W, no? In the interview, she talks about listening to Beyoncé before her Wonder Woman audition, and finding out she was pregnant while shooting Justice League.

-I haven’t watched Survivor in years but it’s back in the news because of last night’s episode, which featured a contestant brutally outing a few team member as transgendered during the tribal council.  The outed contestant wrote a moving essay about the experience, while the outee profusely apologized and gave an interview saying “If he wants to shoot me, I’ll hand him the gun. I deserve this.” Jeff Probst was pissed, but no one seems to be putting any blame on CBS for deciding to air it.

–Jenna Elfman took part in a Reddit AMA to promote her new show Imaginary Mary but all anyone wanted to ask her about was Scientology.

-The best thing about both The Leftovers and Fargo returning this month is that we’re swimming in fantastic Carrie Coon profiles.

-Meanwhile, here’s a good refresher on where the last season of The Leftovers left us.

-Lost and Leftovers creator Damon Lindelof explains why he thinks bingeing TV shows is bad and why viewers deserve a break between episodes. I don’t disagree.

-Are Jamie Foxx and Katie Holmes getting ready to going public? Us Weekly’s magic 8-ball points to “yes.”

-In the latest issue of THR, Stephen Colbert dishes on his angst and anger over why the election felt “like somebody dying.”

–Chris Evans proves himself to be even more of a unicorn than we assumed by revealing that he’s never had a bad breakup.

-The Cannes lineup has been announced, and Nicole Kidman will star in not one, but four films there.

-Not surprising but still happy-making: the reviews for The Handmaid’s Tale are glowing.

-Did you like Big Little Lies? Then you’ll be happy to hear that there are four(!) more Liane Moriarty adaptations in the works.

-Orphan Black fights for the future in this trailer for the final season.

-I don’t disagree with this article about how Lena Dunham is a great actress on Girls. This scene from a few weeks ago took my breath way.

–Britt Robertson builds a fashion empire in the trailer for the Netflix series Girlboss.

–Elle Fanning plays a transitioning teen in the trailer for the controversial 3 Generations.

-The new Beauty and the Beast trailer is here to remind us all how weird it’s going to be to watch a live-action lion dude try to charm a young girl. We’re all getting drunk for this one, yes?

–Kim Kardashian may be confusing us about her marital status by removing and then re-adding the “West” name to her social bios, but Kanye West is doubling down by wearing a new ring stacked atop his usual gold band.

–Carrie Fisher‘s urn is shaped like a Prozac pill because even in death, she’s still awesome.

-Coachella’s owner says he’s no longer donating to anti-LGBTQ groups. Well jeez, all is forgiven then.

–Kirsten Dunst is finding her TV niche. First she killed it in Fargo, and now she’s signed on to a cool-sounding AMC show produced by George Clooney.

–Ben Affleck was spotted on a lunch date with a mystery blonde. It may mean nothing — but no one told her that.

-If the dialogue in Rogue One sounded a bit hinky, this may be why.

–John Mayer and Dave Chappelle  are friends? Who sing Nirvana covers together? Huh.

-I thought the best thing I could hear about Chad Michael Murray was that he’s writing a romance novel — and then I saw this trailer for his new CMT original series. He’s like the gift that keeps on giving!

-More proof the TV landscape is changing: in 2016, 362 scripted series aired on broadcast TV and not a single episode wound up among the top 50 broadcasts. NOT. ONE.  (An NCIS crossover came closest.)

-Speaking of the business of TV, this is a good take on why the TCA press tour (which just started) still matters.

-The creator of the OJ: Made in America doc was bummed last year when he heard about the FX series. He’s since changed his mind. (My brother and I binged this doc over the holidays. It was so good — until the last episode, where we kept having to pause it and look up what happened on Wikipedia.)

-Wait, are Betty and Veronica together in the new Riverdale? Give me this show NOW!

–Kim Cattrall seduces her way through an Agatha Christie mystery in this Witness for the Prosecution trailer.

-A guy wants to date Britt Robertson so much, he travels from Mars to do it in the new Space Between Us trailer.