VIDEO: Lady Gaga and Bradley Cooper performing their global hit “Shallow” together for the first time tonight at #Enigma. pic.twitter.com/JelvSlO8fw

–Lady Gaga and Bradley Cooper were shut out of the SAGs, but they made up for it when he joined her on stage in Vegas for a surprise duet of “Shallow.”

-The SAG Awards were a pretty low-key affair last night, but at least the red carpet was pretty.

-In case you missed last night’s telecast, the best speeches are here: from Chadwick Boseman and Sandra Oh.

-This is Us won best TV ensemble, but really I’d rather watch Sterling K Brown and his wife’s victory clap than another episode of that show.

-Though Black Panther won the top prize at the SAGs, it doesn’t change much for the Oscars because it doesn’t tend to be a great predictor.  The SAG winner has gone on to win the best picture Oscar in only 11 of 23 years. It’s still probably Roma vs Green Book.

-Wait, now the Oscars might drop Best Cinematography from the telecast? Come on!

–Liam Hemsworth talked about his “spur-of-the-moment” wedding to Miley Cyrus.

-Yay for Mindy Kaling! Her new movie Late Night broke Sundance records when it was bought for $13M by Amazon Studios. I love how she talked about it: “I wrote it for Emma Thompson. A person I did not know! So I was just this creep in my home writing fan fiction movie for me and Emma Thompson, a woman I don’t know, hoping she would one day read it.”

-The four-hour Michael Jackson documentary premiered to a standing ovation at Sundance, and his estate is already fighting back.

–Freida Pinto says L’Oreal lightened her skin in an ad campaign. “I said to my agent after the first controversy that I would like to see the pictures before, and I would like to be able to question them on colour correction.”

-Last night’s Rent Live wasn’t actually live because the guy who played Roger broke his foot at the second dress rehearsal and apparently they’ve never heard of understudies or wheelchair. It ended up getting the lowest ratings ever for a live musical so far.

-Who needs to wait for the Super Bowl to see the ads? Here is Cardi B’s Pepsi ad, while Carrie Bradshaw and The Dude return in a Stella Artois ad. (Because of course Carrie would drink beer?!?)

–Diane Kruger says Norman Reedus has been teaching her a lot about how to stay calm as a parent.

-Freeform is teaming with Laurence Fishburne to tell the story of Black Panther Party leader Elaine Brown and her daughter, Ericka Suzanne. The Gilmore Girls-meet-The Black Panthers pitch has me intrigued.

-I’m glad Netflix picked up Brie Larson‘s directorial debut, Unicorn Store. It got mixed reviews at TIFF but people seemed harsher to it than they needed to be.

–Naomi Campbell‘s cover of British Vogue is everything!

–Greg Berlanti, with a record 15 scripted series currently on the air, just landed his third pilot order of the season and his first at Fox. I mean, I love a lot of his shows but my god give someone else a shot, Hollywood!

-I’m not sure how I feel about Barry getting a season 2 (mostly because I adored how the first season ended), but this trailer is good.

-The only thing I know about Birds of Prey is from the CW which is … uh… not good. So I appreciated this explainer, because this teaser has me very excited. Chris Messina’s hair alone bought my ticket. 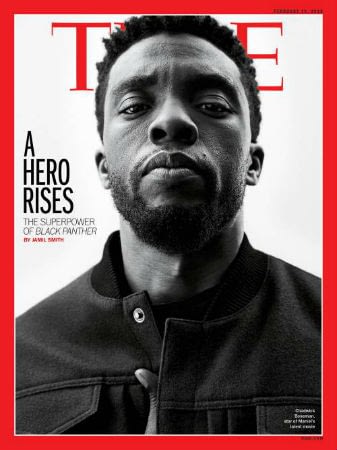 -This is terrible: Glee’s Mark Salling is dead of an apparent suicide. He recently pleaded guilty to possessing child pornography and was facing up to seven years in prison. It’s a complicated situation, and some of the cast and crew of the show have shared their mixed reactions.

-I’m so glad that the Black Panther reactions from last night’s premiere are glowing. “By far the best Marvel movie to date.” This makes me very happy.

-It was also the hottest red carpet I have ever seen.  (Everyone killed it, but my fave was Issa Rae.)

–Mandy Moore talks about her divorce in her Cosmo cover story: “It emboldened me.”

-Suits’ Star Patrick J. Adams opened up about his decision to leave the show, saying of costar/onscreen love interest Meghan Markle: “There was this natural sense that we both knew that the time had come for both of us. It went unspoken and we just enjoyed the hell out of the last few episodes that we got to shoot.” That’s very gracious of him.

–Mark Ruffalo offered his theory about why more men aren’t speaking out about #MeToo and #TimesUp: “I think maybe they’re afraid of being accused, I think they may be afraid of feeling like they didn’t do enough or say enough. I’m not sure, but I don’t know why they’re not being asked more.”

–Kirsten Dunst showed off her belly bump in this new Rodarte photo shoot.

-Despite this viral photo, Dakota Johnson insists she wasn’t looking for trouble between Jennifer Aniston and Angelina Jolie at the Golden Globes.

–Nicole Eggert expanded on her accusations against Scott Baio in a new interview with Megyn Kelly, alleging “sexual touching and abuse.”

–Joel Kinnaman says he wasn’t surprised by sexual misconduct allegations against his House of Cards co-star Kevin Spacey.  “I have five or six friends I know who have told stories about Kevin about when they were young and had just arrived in Hollywood.”

-Here’s the trailer for Mute, Duncan Jones’ spiritual sequel to his indie hit Moon (which I ADORED), starring Alexander Skarsgard and Paul Rudd.

-Speaking of new movie trailers starring Paul Rudd, here’s the first one for Ant-Man and the Wasp. Michelle Pfeiffer, y’all!