Matt Damon speaking over the only black person in the room so he can explain diversity to her is SO WHITE it hurts pic.twitter.com/iaQStYZ0ij

-This is a shitty day to be a woman or POC. First, Matt Damon mansplained diversity to a black woman, and then Vanity Fair released this photo of late night talk show hosts.

–Elizabeth Olsen denied a relationship with Tom Hiddleston. But, but, why???

-This video is proof that Vancouver is actually the ultimate character actor.

-Also one of those people sobbing uncontrollably at Freeheld last night was me. I’m owning it.

–Emilia Clarke is not a fan of gratuitous sex scenes. She’s on the wrong show.

–John Oliver had to close his megachurch because too many people sent him semen.

-Let’s pour one out for Pink Is The New Blog — one of the first and the best.

–Arnold Schwarzenegger was just named the new host of Celebrity Apprentice, which *I guess* is an upgrade? Maybe?

-I think it’s HILARIOUS that Katie Holmes is going to such great lengths to disguise herself when meeting up with Jamie Foxx. It’s like she thinks we care or something?

–Rihanna and Travis Scott made out — and made Justin Timberlake uncomfortable.

-I never thought I’d see the words ‘Kristen Stewart‘ and ‘dubsmash’ in the same headline.

-I’m swamped with TIFF right now so the blog will be a little light this week. Apologies! 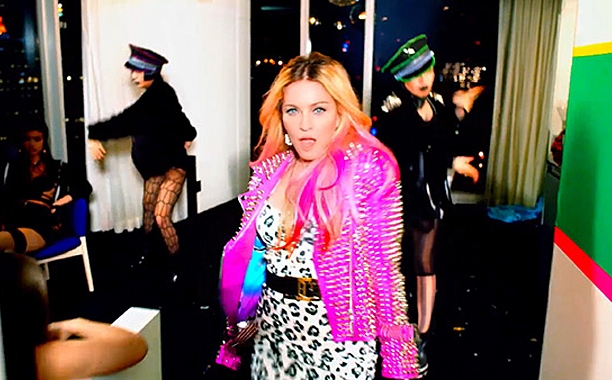 -My, how the mighty have fallen. Madonna‘s “Bitch, I’m Madonna” video was supposed to drop yesterday but was delayed (the second time that’s happened to her this year). Then it debuted on Tidal for subscribers only — though it keeps getting uploaded and pulled on YT. And when I finally found a version online, it turned out to be super underwhelming. Despite promising cameos by Beyonce, Katy Perry, Nicki Minaj, Miley Cyrus and more, none of them actually interact with Madonna. Nicki, for instance, couldn’t be bothered to show up and basically FaceTimes into it. How did this happen?

-When Miley wasn’t barely appearing in Madonna’s video, she was busy launching an Instagram series called #InstaPride to celebrate transgender people. Man, I’m really starting to like this kid.

-According to Us Weekly, Charlize Theron and Sean Penn are dunzo.

–Emma Stone talks about panic attacks, the Sony hack and maintaining her privacy in this charming new interview. (I love that as a kid she was a computer geek who knew HTML.) She also admits that she passed on the all-female Ghostbusters remake because she didn’t want to commit to another franchise.

–Mindy Kaling tried out a sexual abuse joke on GMA this morning and it went over about as well as could be expected.

-Meanwhile, her movie Inside Out is currently sitting at 100% fresh on Rotten Tomatoes with 61 reviews counted.

-Also, Corden helped Arnold Schwarzenegger act out all of his movies in just six minutes.

-Meanwhile, the best part about this oral history of Batman Forever is when a producer lets it slip that Arnold pays $1 a year to “borrow” the Mr. Freeze costume. lolololol

-Words I never wanted to say/think/type: The Walking Dead’s Norman Reedus and Emily Kinney are rumoured to be dating. He’s 46 and she’s 29 (which is way older than I thought she was, but still). Luckily, it may just be wishful thinking by fans/Us Weekly: Norman’s rep has denied the report.

–Aaron Paul is going to be in a Hulu show created by Jason Katims?! YOU GET ME, HULU.

-Great Buzzfeed article on the latest tabloid taboo: When a celebrity is in an observable same-sex relationship, and how the media is obsessed with self-declaration.

-There’s a lot of talk about  Jennifer Lawrence‘s $20 million payday, so Vulture has a detailed explanation about why she deserves every damn penny.

-Brace yourselves: the Internet is going to ruin Game of Thrones‘ next season long before it premieres. (Just in case the actor in question’s complete lack of IMDB activity for the next year hasn’t already tipped you off…)

-In his Reddit AMA, Channing Tatum mocks Jupiter Ascending, talks about his love of Chili’s and getting lost in Matt Bomer‘s eyes, and is an all-around charm bomb.

–Stephen Amell is using his huge Facebook following to get Blue Jays’ third basemen Josh Donaldson voted into the MLB All-Star Game. And he called out this article about it for having “possibly the worst headline ever.” (I dunno, it got me to click on an article about BASEBALL, so I kinda think it’s a winner…)

-@smartbitches is reading the new 50 Shades book and live-tweeting it, and it’s glorious!

-The early reviews for True Detective season 2 aren’t exactly glowing, but at least Taylor Kitsch looks great in the new issue of Elle.

-Does this Nic Cage movie actually look good, or am I just drunk(er than usual)?