–Taylor Swift grew up on a Christmas tree farm so it makes sense that she wrote a holiday song called “Christmas Tree Farm.” The video, released just days after she wrote the tune, features home movies of her as a kid and is undeniably adorable.

–Jennifer Garner showed off her giant Christmas tree. “I’m not sure this is the tree we picked out. It’s a little aggressive.” (Also, she says ‘foyer’ weird.)

-I friggin’ love that Robbie Amell did interviews for his new movie at Pai because it’s his fave Toronto restaurant. He’s not wrong. (Great cameo by Chef Nuit, too.)

–James Corden and Max Greenfield made an aspiring screenwriter’s dreams come true in a Starbucks.

-My god, just shut down every version of Big Brother immediately. This show is a trainwreck in every country.

-In honour of Marriage Story hitting Netflix today, Vulture did a feature on how Adam Driver looks ridiculously tall in that movie. (“What we are gathered here today to discuss is how much fun it is to see Adam Driver, big boy, squeeze himself into small things.”)

-Wait, now Amy Sedaris is in The Mandalorian? I’m gonna have to watch this sucker, aren’t I?

-This is a very good, very deep dive into the reporting style of the National Enquirer.

-All the brands who replied to this Netflix tweet nailed it. (Scroll through the photos for responses.)

–Tom Holland may have saved the Spider-Man movies by drunkenly calling Disney head Bob Iger at a pub in tears. “I’m like three pints in, I haven’t eaten much…I was really emotional because I felt like it was all coming to an end.”

–Keri Russell and Oscar Isaac are the real dream duo on this promo tour.

-Here’s a lovely moment of Jodie Whittaker getting a silver disc for her cover of Coldplay’s Yellow.

–Felicity Jones and Eddie Redmayne star in the trailer for The Aeronauts, a film that got lukewarm reviews on the festival circuit.

Would it be helpful for me to explain the current Royal scandal w a great deal of personal editorializing?

-Pop culture writer Nicole Cliffe tweeted a speculative thread about the royal scandal  this weekend and it is one big pot of piping hot tea!

-Speaking of interesting Twitter threads about the royals, this is a good one on Meghan Markle’s coverage.

-So I guess those rumors that Emma Roberts has moved on from Evan Peters are true. She was photographed holding hands with Garrett Hedlund.

-This is a really interesting look at all the lawsuits surrounding Ariana Grande’s “7 Rings” and the age of pop plagiarism.

-Meanwhile, Grande dined at one of my fave Montreal restaurants yesterday, and dropped a bisexual-teasing video today.

–Justin Bieber and Hailey Baldwin‘s big April Fool’s joke was a fake ultrasound image, which went over REAL well with his fanbase. .

-Congrats to Issa Rae, who got engaged to her longterm boyfriend.

–Chris Martin and Dakota Johnson are still a thing? This will never not surprise me.

–Lupita Nyong’O has handled the controversy surrounding her inspiration for her Us character so, so well.

-Weirdly, I somehow follow a lot of people on Twitter who watch WWE, so I was a bit aware of how badly wrestlers were being treated. But this segment on John Oliver‘s Last Week Tonight was eye-opening.

-A Los Angeles police spokeswoman says a “huge” manhunt is underway to find the suspect who shot and killed rapper Nipsey Hussle on Sunday afternoon.

-This would *suck*: Lana Del Rey says she accidentally dropped her laptop in the studio and lost all the song files from her new album that was ready for release in the next few months.

-For the 20th anniversary of the premiere of Strangers With Candy, Stephen Colbert, Amy Sedaris and Paul Dinello look back on the early days of their friendship. I still can’t really believe that show made it on air. I loved it but it was so. out. there.

-This is good casting: Cillian Murphy is currently in talks to star alongside Emily Blunt in A Quiet Place 2.

–Mark-Paul Gosselaar says he fired his mom as his manager when he was 19 and realized she didn’t know what she was doing.

-In today’s “networks need to know when to let shows die” news, Emily Bett Richards has announced she’s leaving Arrow before the end of its run. I think this bums me out even more than the announcement that the show will end with a 10-episode season because I thought they could wrap it all up well, but now it’s going to be a mess. Stephen Amell said he warned execs last year that he was done after this current season so my guess is the show was writing them both out (because her character is so integral to his story), while trying to figure out ways to keep the series going without its two leads, which is why there’s been a trillion new characters introduced this season. But when they realized the newbies weren’t catching on with the audience, they decided to scramble together a short final season and convinced Amell to do another 10 episodes for the crossover — but by then Rickards had already booked another gig.

-In any case, Amell’s IG post about her leaving is very sweet — and seems to have riled up the comic fanboys, so that’s always a plus.

-Speaking of superhero TV, Legends of Tomorrow returns tonight! I love that they tried to make the guy who played Biff in Back to the Future the big bad – but then they all fell in love with the actor so now he’s just a regular character.

–Christina Applegate and Linda Cardellini deal with grief in the trailer for Netflix’s new show Dead to Me. 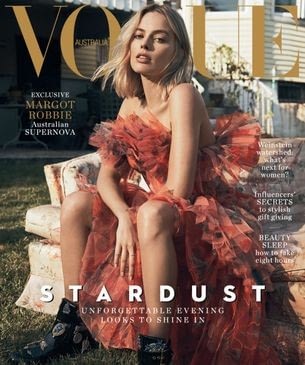