Happy news from @priyankachopra, who shared on Instagram that she and @nickjonas have welcomed a baby via surrogate: pic.twitter.com/7sMpOd7KYz

–Adele posted a tearful video about cancelling her Vegas residency the day before she was set to start. “We’ve tried absolutely everything we that can to pull it together in time, and for it to be good enough for you, but we’ve been absolutely destroyed by delivery delays and COVID… half my team and half my crew are down with COVID they still are and it’s been impossible to finish the show.” It’s a heartbreaking video but god, I hope she figures out a way to make it up to the fans who’d already travelled to Vegas for this weekend’s show. She’s clearly there already so I wonder if she could host an event for any ticket holder who can prove they booked their hotel before she made the announcement or something?

-Another rough day in celebrity deaths. Singer Meat Loaf has died at aged 74, while comedian Louie Anderson has died at 68 following a battle with cancer.

-Covid keeps screwing up Tom Cruise‘s plans. Mission: Impossible 7 & 8 have both been delayed to 2023 and 2024, respectively.

–Jennifer Coolidge told Jimmy Fallon that Ariana Grande doing an impression of her on his show helped her career. The actress, who starred in Grande’s “Thank U Next” music video, shared, “You should know, it was sort of the beginning of a lot of cool things that happened for me. I was going through a dead zone, not much was going on. Then Ariana did this imitation on your show and you encouraged her. And then this ball got rolling.”

–Cynthia Nixon responded to Chris Noth’s removal from the finale of HBO Max’s And Just Like That following allegations of sexual assault. “I think we were very lucky that those changes were able to be made. And I think we are very proud of our show.”

-Speaking of And Just Like That, Sarita Choudhury (who plays Carrie’s real estate agent Seema) says she was “shocked” by the flak the show got.

–Whoopi Goldberg is back in the trailer for Star Trek: Picard’s second season.

–Bill Paxton’s family can seek punitive damages against Cedars-Sinai in a wrongful death suit. The late actor’s family claims the hospital and his doctor covered up their negligence by not performing an autopsy and they didn’t learn one hadn’t been done until after the actor had been cremated.

-Um, should I be watching Peacemaker? ‘Cause this clip of Adrian Chase/Vigilante is amazing (and not cause it stars the cute guy from Bridgerton and UnREAL).

-Sony has yet to secure a date for Spider-Man: No Way Home in China, but the country will allow Woody Allen’s recent romcom a release.

–Will Forte returns to his SNL roots in the promos for this weekend’s show.

–Jesse Eisenberg’s directorial debut, When You Finish Saving the World starring Julianne Moore and Finn Wolfhard, is getting good reviews out of Sundance.

-Apple TV’s “Everyone but Jon Hamm” commercial is cute.

–Sam Claflin plays a stodgy author whose book becomes a bestseller in Mexico when the translator (Verónica Echegui) rewrites it in Amazon’s Book of Love, which debuts Feb 4.

–Ryan Reynolds and his ad agency pulled together that Peleton ad in response to And Just Like That in only 48 hours. Reynolds did a quick Aviation Gin ad when that cringey holiday Peloton commercial went viral a couple years ago, so it makes sense that they would come to him for some instant brand rehabilitation. (Don’t watch if you’re not caught up with the Sex and the City revival, obvs.)

–Tom Holland and Zendaya are super cute here, talking about how they can’t be in the kitchen at the same time because her cooking style is haphazard, while he likes to precisely follow recipes.

–Britney Spears posted a bunch of screengrabs of her notes app which contained basically stream of conscious thoughts about hot chocolate and Christmas shopping, but she did make some pointed comments about her infamous 2003 interview with Diane Sawyer.

-I’m not sure what the baby bar exam is, but Kim Kardashian says she passed it.

-God, that Succession finale was so good. I kept thinking about how Kieran Culkin said he and Jeremy Strong disagree about whether the show is a comedy or a drama, and how that scene in the parking lot perfectly embodied that.

-Meanwhile, Jeremy Strong‘s celeb friends keep rushing to “defend” him over that completely innocuous magazine profile. Aaron Sorkin, Adam Mckay and Anne Hathaway weighed in over the weekend, which inadvertently kept it in the news cycle. Are stars really so far removed from the profiles of 10-20 years ago that they think any article that isn’t incredibly fawning is a hit piece? That New Yorker profile did more to humanize Strong than any other interview I’ve read with him. Does everyone in Hollywood forget when celebs weren’t media trained within an inch of their lives, and profiles weren’t just PR fluff pieces? They should all revisit Jennifer Lopez’s 1998 Movieline interview (in which she slams Gwyneth Paltrow, Cameron Diaz, and more) to remember how these things used to go.

-Everyone’s guessing Adam Mckay and Will Ferrell for this blind item, which seems crazy.

-Any movie that isn’t a superhero flick seems to be struggling at the box office (and we are, after all, still in a pandemic) but West Side Story’s returns were bad enough to surprise people.

–Olivia Colman inadvertently mocked Jack Whitehall’s acting when they both appeared on the Graham Norton Show. God, I love her.

–Keanu Reeves also appeared on that episode of GNS — and forgot the name of the movie he was promoting.

-Meanwhile, Keanu Reeves and his Bill & Ted costar Alex Winter has a double date this weekend.

–Armie Hammer’s lawyer told People: “I can confirm that Mr. Hammer has left the treatment facility and is doing great.”

-I missed this video of Adele doing a makeup tutorial with NikkieTutorials. I love this as a promo tour stop!

–Elon Musk was named TIME’s ‘Person of the Year’ and nobody is happy about it.

–Drake and Kanye West put their beef aside to forces for a much-anticipated benefit concert in Los Angeles last week — and everyone was talking about how Ye outshined Drake.

-It’s interesting to see Station Eleven make some Best of 2021 TV lists, seeing as it just debuts this week.

-I watched The Hating Game this weekend and was pleasantly surprised, given the buildup I had in my head. And the reviews are good!

–Susan Sarandon is the queen of country music in the trailer for Fox’s Monarch.

-The gang returns to Hogwarts in the first full trailer for Fantastic Beasts: The Secrets Of Dumbledore. 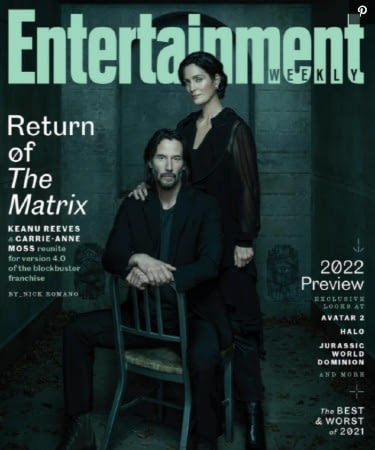