If a man tried to dress me on a date, I’d run. Especially if said man was “ye.” pic.twitter.com/oMV2IUAhIp

-The Julia Fox/Kanye West thing go so weird so fast. She gave Interview magazine basically a “date diary” (with photos!) about her second date with him, in which he surprised her with a new wardrobe. (The article seems to have been pulled but you can still view the cached version.) They’ve only known each since New Year’s Eve and many others have pointed out that he reportedly tried to control Kim Kardashian‘s wardrobe, but a new interview with her seems to indicate that she’s aware people are worried she’s being love bombed.

-Also, it wasn’t until that interview that I saw she once accused her ex-husband and the father of her baby of “f*cking his aunt.” What is happening?!?

–Kate Bosworth is dating Justin Long after announcing her split from her husband in August. When I first read that I thought, “Oh cute, they’ve reunited.” But apparently, they didn’t date in the 90s and I just imagined that?!

–The Weeknd‘s new album dropped and everyone is wondering if the song “Here We Go…Again”, (which includes the line “My new girl, she a movie star”) is about Angelina Jolie.

-This is an excellent interview with Andrew Garfield (who, in this moment, seems to be more beloved than he’s ever been). He talks about his willingness to play Spider-Man again (there’s lots of spoilers about how what happens in the latest movie could pave the way, so click only if you’ve seen No Way Home).

-In another interview, he says he and fellow Spider Man alum Tobey Maguire snuck into a movie theatre together to watch No Way Home. I love that they have a little Spidey-based bromance!

–Adam Scott posted a pic in his Party Down costume for the revival and it makes me so happy (and yet also sad that his character still appears to be a cater waiter).

-It looks like Mary Cosby has quit the Real Housewives of Salt Lake City reunion.

-Amazon’s The Boys will return June, and celebrated with a funny fake ad.

–Shawn Mendes and Camila Cabello were spotted together in Miami, but maybe they were just coparenting their dog?

–Rooney Mara will play Audrey Hepburn in a new biopic.

-I’m always hesitant to put too much stock in early reactions to new films while the reviews are still embargoed, but man, everyone is losing their minds over the new Scream.

-Insecure’s Yvonne Orji plays a matchmaker for single parents in the trailer for My Mom, Your Dad. 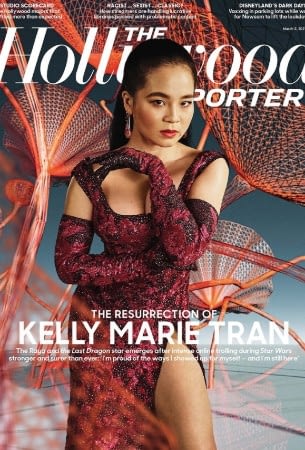 -This profile on Kelly Marie Tran is excellent. She talks about thinking she’d won the role of a lifetime with The Last Jedi — before the powers that be eventually bowed to the will of a few noisy trolls and reduced her role in the entire franchise. “Hope, for me, looks like reminding yourself that to get where you are, you’ve survived some shit.”

–Meghan Markle and Prince Harry’s interview with Oprah on Sunday night is becoming a bigger deal by the minute. Demand is high and CBS is cutting deals to air it around the world.

-In a new clip, Meghan makes it clear that she believes the palace took an “active role”  in spreading lies and making their lives difficult as working royals.

-Meanwhile it turns out those bullying complaints against Meghan Markle weren’t even filed by the people they were about. They were filed by a guy who was close friends with somebody the couple fired for misconduct. “When it became known to [the two individuals mentioned in the complaints], they each asked for the matter to be rescinded and for it to not become an official complaint.”

-A woman who says Nicki Minaj’s husband attempted to rape her when she was a teen talked to the Daily Beast about the alleged harassment and threats she’s received from their camp in order to get her to recant.

–Angelina Jolie and Ellen Pompeo were spotted at dinner together with their daughters.

–Michael Strahan was not impressed with his interview with Chris Harrison: “It felt like I got nothing more than a surface response on any of this. Obviously he’s a man who wants to stay on the show. Only time will tell if there’s any meaning behind his words.”

-I liked this piece on the divide between WandaVision viewers: some people have been watching it as an examination of a woman’s grief and her inability to process tragedy, while others are obsessed with MCU Easter eggs and predictions for what it means for the future of the franchise. I expect the latter group is going to be mightily disappointed this weekend.

-I know I complain a lot about Hollywood doing reboots/revivals instead of coming up with new ideas, but I legit squealed when I read that Party Down is coming back for a limited series. There’s no cast announcements yet but Adam Scott tweeted about it so I’m hopeful. Are we having fun yet?!?

-This is a good piece on how prestige dramas have failed teenage girls, and why now is the time for a reckoning.

-With the Britney Spears doc making everyone revisit her sexist coverage, this is a good chat with some of the journalists responsible for those big magazine stories of the early 2000s.

-This year’s SAG Awards will be a pre-taped, hour-long special. After the Globes debacle, this sounds perfect.

–Michael B Jordan plays a Navy SEAL who uncovers an international conspiracy while searching for the killers of his pregnant wife in the No Remorse trailer.