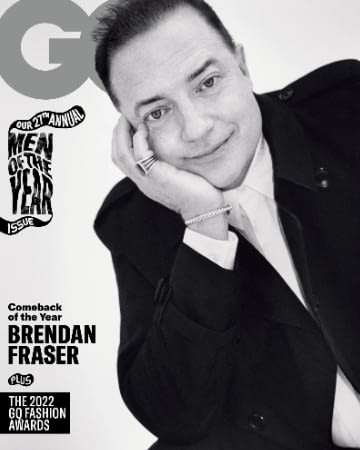 –Brendan Fraser covers the December issue of GQ, the publication that made him go viral a few years ago when he talked about his exile from Hollywood and alleged that he was groped and assaulted by Hollywood Foreign Press Association president Philip Berk at a 2003 luncheon. He reunites with writer Zach Baron and talks about the impact of that article  (“[When I was trending on Twitter] I was like, Oh, my God. Oh, fuck, what have I done now? And it was people saying they like me. And they referenced that piece. I was like, Is this good, is this problematic? I don’t know. What did I do to earn this?”), and what his comeback with The Whale means (“I don’t know if this is gonna give me some big redemption in my own life. I know that I’m proud of the work that I did, and it’s enough. It’ll live on long after me. And that’s good. The other stuff, maybe not so much. That’ll live on too, but…I think I just have to live for what’s happening for me now”).

–Taylor Swift released a statement about the Ticketmaster fiasco and basically said “you’re on your own, kid.” Seriously, I was expecting more. And didn’t she (or at least her team) approve the dynamic pricing stuff?

-Meanwhile, the Justice Department has opened an investigation.

-If you find yourself bored this weekend, there are a ton of new movies hitting streaming today: Spirited with Ryan Reynolds and Will Ferrell is on Apple+, The Enchanted sequel Disenchanted with Amy Adams and Maya Rudolph is on Disney+, Slumberland with Jason Momoa is on Netflix, and The People We Hate at the Wedding with Kristen Bell and Allison Janney is on Prime.

-Speaking of Ryan Reynolds, wife Blake Lively paid tribute to him when he received the prestigious American Cinematheque Award last night in LA, saying in her speech, “I see what Canada loves this man, as it should.”

–Emily Ratajkowski hinted that she’s open to dating “multiple” people amid her romance with Pete Davidson. As she should be.

-HBO has renewed The White Lotus for another run. The third season will follow a new group of guests at a different resort.

-This review of Bones and All basically nails all my feelings about it.  I can’t believe this movie is at 89% fresh.

–Andy Dick has been sentenced to 90 days in jail after being convicted of sexual battery, and must register as a sex offender.

-The jury in Danny Masterson‘s rape trial told the judge today that it could not reach a verdict.

-Here’s a new look at the The Guardians of the Galaxy holiday special.

–Lily Tomlin, Jane Fonda, Rita Moreno, and Sally Field star as a group of friends who try to sneak into the Super Bowl in the 80 For Brady trailer.