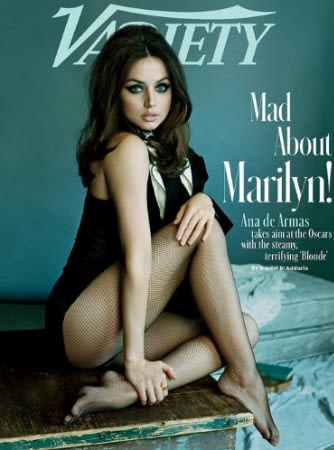 -Is this new Ana de Armas Variety cover part of her FYC campaign? It’s not unheard of for an NYC-17 film to get Oscar consideration but it’s extremely rare — and that’s for ones that critics liked. Blonde is not doing well reviews-wise. In the interview, she says the day after the Netflix film wrapped she flew to London to shoot No Time To Die, in which she plays Paloma (“If you think about Paloma now, I am sure there is some Marilyn in there…Paloma stole a little bit of her”), and talks about Chris Evans‘ reaction to seeing the film (“Holy s—! You’re going to win an Oscar for this!”).

-In her Elle cover story, Shakira talks about her split from Gerard Piqué and the Spanish government accusing her of tax fraud. “What’s also real is the disappointment to see something as sacred and as special as I thought was the relationship I had with my kids’ father and see that turned into something vulgarized and cheapened by the media. And all of this while my dad has been in the ICU and I’ve been fighting on different fronts. Like I said, this is probably the darkest hour of my life.”

-Wait, is the reason Brad Pitt keeps trying to fight Angelina Jolie over the winery is because he’s now hawking a “genderless skin care line” made with grapes from the vineyard? This feels weirdly off-brand and try-hard-y. (Also the moisturizer is $320 US so…no.)

-The only good bit from his interview about it was this tidbit: “Actually, Sandy [Sandra Bullock] and I did once try to develop a whole idea of a husband and wife team, who were QVC’s most successful salespeople, but we’re getting a divorce, we hate each other, and we’re taking it out on air as we sell things. That’s as far as we got.”

-Meanwhile, Emily Ratajkowski is over people who blame young women for having affairs with older, famous married men.

-I love that Billy Eichner brought iconic Billy on the Street guest star Elena as his date to Bros’ premiere in New York City.

-The reviews for the new Star Wars series Andor, which dropped at midnight, are pretty glowing.

-Speaking of TV shows that are hitting at another level, this season of Reservation Dogs has been stunning so far.

-I’m not surprised that Hollywood’s has had a feverish response to the weight-loss drug Ozempic. It’s all over my TikTok feed.

-Co-parenting two young children with a man accused of sexual abuse, harassment, and a fascination with cannibalism cannot be easy. But according to Elizabeth Chambers, she and Armie Hammer are “in a really great place” as they work to finalize their divorce.

-I’m so ready for a new Jennifer Lopez romcom — especially one that costars Jennifer Coolidge, Lenny Kravitz and D’Arcy Carden.

-HBO is already in production on a follow-up episode to the docuseries The Case Against Adnan Syed.

-Whoa: David Cronenberg’s 1981 cult classic Scanners is being adapted into an HBOMax series.

-I have no interest in watching Pearl because I’m a wimp, but everyone’s talking about Mia Goth‘s nine-minute monologue.

–Lucy Hale and Kunal Nayyar star in the adaptation of The Storied Life of A.J. Firky.

-In the trailer for Netflix’s From Scratch, Zoe Saldana plays an American student studying in Italy, who meets and falls in love with a Sicilian chef who returns with her to the US.