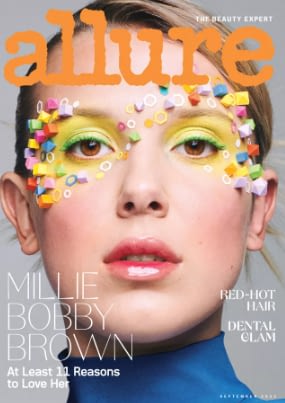 -Stranger Things star Millie Bobby Brown covers the Sept issue of Allure and talks about stepping way from the vitriol of social media (“It’s really hard to be hated on when you don’t know who you are yet”), why she created her youth beauty line (“Everything’s antiaging, everything is depuffing. We don’t know what that means. I need to know more. And I know our generation needs to know more”), and her “unhealthy situation” with TikTok star Hunter Ecimovic, who made crude comments about their relationship when she was 16 and he was 20 (“When you get publicly humiliated this way, I felt so out of control and powerless. Walking away and knowing that I’m worth everything and this person didn’t take anything from me, it felt very empowering”).

-I don’t know if it’s because it’s shot like a E! True Hollywood story or if it’s the subject matter, but even though there’s not much new info in the trailer for the three-part docuseries on Armie Hammer and his family, it’s really, really disturbing.

–Olivia Wilde and Jason Sudeikis‘ custody fight is getting messier. She responded to being publicly served custody papers while on stage at CinemaCon in April — filing court docs of her own saying he tried to “embarrass” and “threaten” her with the stunt. “Jason’s actions were clearly intended to threaten me and catch me off guard. He could have served me discreetly, but instead he chose to serve me in the most aggressive manner possible. The fact that Jason would embarrass me professionally and put our personal conflict on public display in this manner is extremely contrary to our children’s best interests. Since Jason has made it clear that we will not be able to work this out for our children’s sake outside of the court system, I filed a petition for custody in Los Angeles.” The judge granted her request to dismiss Sudeikis’ petition to move their custody battle from California to New York.

-Variety’s Power of Young Hollywood features Angus Cloud, Halle Bailey, Becky G and Brooklyn Peltz Beckham. Not surprisingly, Euphoria’s Cloud gives the best interview, explaining that he got the scar on his head from falling into a construction pit at 13. “I woke up 12 hours later at the bottom. I was trapped. I eventually climbed out after — I don’t know how long. It was hella hard to climb out, because my skull was broken, but my skin wasn’t, so all the bleeding was internal, pressing up against my brain. But they wasn’t gonna find me down there. I found myself. Or God found me, whatever you want to call it. But I didn’t feel no pain. I was in survival mode, you feel me?”

-Also, this part of the video where they ask him if he prefers Shrek or the Studio Ghibli movies is such a Fez-like response.

-The loves of Ben Affleck’s life have been captured in one photo.

-This is a very cute interview with Ted Lasso’s Brett Goldstein and Hannah Waddingham.

–Marcus Mumford tells GQ his mom learned he was sexually abused when he was 6 after he played her his latest single — and he realized he had never told her about it. “[She said] ‘Can I ask what that song’s about?’ I was like, ‘Yeah, it’s about the abuse thing.’ She was like, ‘What are you talking about?’ So once we get through the trauma of that moment for her, as a mother, hearing that and her wanting to protect and help and all that stuff, it’s objectively fucking hilarious to tell your mom about your abuse in a fucking song, of all things.”

-Not surprisingly, Ryan Reynolds says Blake Lively’s reaction to him buying a soccer team was “Not great, we’re still working through that one.”

-How does a series that’s as bad as The Morning Show keep landing such good talent? Jon Hamm just joined the cast as a corporate titan.

–Steve Martin tells THR about being ready to wind his career down and then came Only Murders in the Building and his three Emmy nominations. And a new stage show. And a new book. And a new doc.

-A League of Their Own is getting good reviews.

-Good lord, the Golden Globes will return to NBC next year.

–Amanda Seyfried says she wishes sets had intimacy coordinators when she was younger. “Being 19, walking around without my underwear on – like, are you kidding me? How did I let that happen? Oh, I know why: I was 19 and I didn’t want to upset anybody and I wanted to keep my job. That’s why.”

-Here’s the trailer for Lena Dunham’s period piece, Catherine, Called Birdy, starring the fierce little girl from GoT and Fleabag’s Hot Priest. I’m into this.

–Sigourney Weaver rekindles a romance with her old high school flame, played by Kevin Kline, in The Good House trailer.