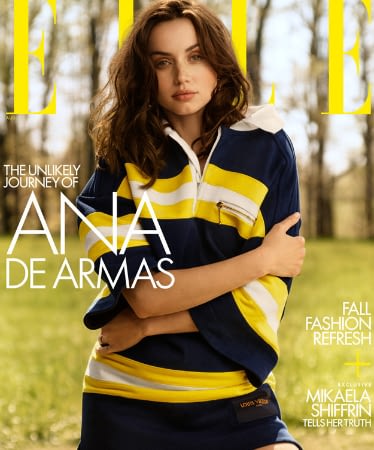 –Ana de Armas covers the August issue of Elle to promote The Gray Man and talks about the paparazzi attention surrounding her relationship with Ben Affleck (“That’s one of the reasons why I left L.A. Going through it [myself] confirmed my thoughts about, ‘This is not the place for me to be.’ It became a little bit too much. There’s no escape. There’s no way out”), and playing Latina roles (“I do want to play Latina. But I don’t want to put a basket of fruit on my head every single time. So that’s my hope, that I can show that we can do anything if we’re given the time to prepare, and if we’re given just the chance, just the chance. You can do any film – Blonde – you can do anything. The problem is that sometimes you don’t even get to the room with the director and prove yourself”).

-Ticket prices for Broadway’s revival of Funny Girl have skyrocketed in the wake of all the drama. Who’s paying $2k+ to see Lea Michele?

-Meanwhile, the Daily Beast’s deep dive into the Funny Girl kerfuffle is worth a read. Beanie Feldstein and Lea Michele share an agent(!), a majority of producers wanted to keep Feldstein, and they seemed miffed that she started making them go through her reps to negotiate her future after the Gawker article dropped with rumours that Michele would take over. It sounds like they were hanging her out to dry since the jump (including casting her when she clearly wasn’t able to handle the vocals!) so I don’t blame Feldstein for not wanting to talk to them directly. Said one source; “It was an emotional decision to keep Beanie in the role. It was ‘We’re going to make this work.’ But this wasn’t one of those ‘’Keep your chin up’ moments. It wasn’t working. I feel horrible that we didn’t do the right thing. I say we didn’t care for Beanie in the right way, because ultimately her feelings matter. We cared enough to stand behind her when the reviews were bad. But we should have found someone else, and once we found someone, we should have said to Beanie, ‘You can go now.’ There’s a million things we could have said publicly — that she had a family emergency, that she was on vacation, or had gotten sick, or that she had fulfilled her contract. No one had to know anything else.”

-The article doesn’t touch on the thing that I’m most intrigued by: Jane Lynch moving up her departure from the show so that she never overlaps with Michele. Lynch put out a nice statement about her, though.

–Daniel Kaluuya is not returning as W’Kabi in the upcoming Black Panther movie.

-I missed the news earlier this week that Kirsten Dunst and Jesse Plemons had married, but yay! I dig them.

-I remember Jon Hamm talking on a podcast years ago about wanting to remake Fletch, so I’m glad it’s finally happening for him.

–Zazie Beetz, Josh Hartnett, Aaron Paul, and Kate Mara are among the stars who’ll appear in the next season of Netflix’s Black Mirror.

-I’m liking how the Red, White and Royal Blue casting is shaping up. Uma Thurman as President Claremont is a great choice!

–Juliette Binoche is promoting her new IFC drama and talked about her long career: “I don’t think anyone is born being mean. Some people may be more fragile than others but we’re on Earth to transform ourselves and heal. Acting is about questioning, what is being human, in this situation, in this period, in front of these people.”

-I thought the trailer for Rob Zombie’s The Munsters was a joke, but apparently this is a real thing?!