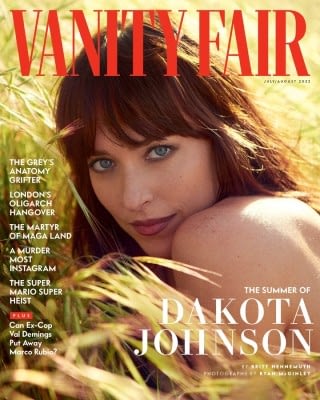 –Dakota Johnson is such a complicated celeb for me. I’m very much looking forward to her new Netflix movie Persuasion, and I love that she’s credited for Ellen’s fall from grace, but I always remember how she defended Armie Hammer and Shia Labeouf (and possibly locked strangers inside a coffee shop). In her new Vanity Fair cover story, she once again decries “cancel culture” (“The concept of the Twitterverse deciding if someone just all of a sudden doesn’t exist anymore is horrifying, heartbreaking, and wrong”). She also reveals that she, Maggie Gyllenhaal, and Jessie Buckley got tattoos after the Met Gala but their Lost Daughters costar Olivia Colman was out of town on a shoot (“She was pissed off. She called and was like, ‘What the fuck?'”) and how author E.L. James interfered with the Fifty Shades movies (“She had a lot of creative control, all day, every day, and she just demanded that certain things happen…It was always a battle. Always…We’d do the takes of the movie that she wanted to make, and then we would do the takes of the movie that we wanted to make. The night before, I would rewrite scenes with the old dialogue so I could add a line here and there. It was like mayhem all the time”).

-Meanwhile, this new clip from Persuasion comforts me more than the trailer did.

-Also on the promo trail is Chris Pratt, who covers Men’s Health and talks about the backlash to an Instagram post praising his wife for giving him a “healthy” daughter, which was seen as a slight to his son, who was born premature and with health issues. “I’m like, That is f—d up. My son’s gonna read that one day. He’s 9. And it’s etched in digital stone. It really f*cking bothered me, dude. I cried about it.”

-Meanwhile, Taylor Kitsch is promoting The Terminal List alongside Chris Pratt and he does not appear to be having fun.

–David Harbour says Winona Ryder keeps Stranger Things authentic. “She’d tell them [Duffer Brothers], ‘This song actually came out in 85, and you have it in 83.’ She knew all of these minute, tiny details they didn’t even know.” Yeah, that’s definitely the job of a music supervisor.

–Ghislaine Maxwell has been sentenced to 20 years in prison and a $750k fine for helping the wealthy financier Jeffrey Epstein sexually abuse teenage girls.

-In today’s ‘Hollywood has run out of ideas’ news, Baz Luhrmann‘s 2008 film Australia, which starred Nicole Kidman and Hugh Jackman, is being recut into a limited series for Hulu.

-I haven’t watched Days of Our Lives in legit 20 years and I can’t believe so many originals are coming back! Hope and Bo! Patch and Kayla! And how do they all still look the same??

–Melissa Benoist has renewed her Warner Bros. TV overall deal, and is set to star in HBO Max’s The Girls On The Bus, inspired by a memoir about a journalist on Hillary Clinton’s campaign trail.

-I’m almost at the point with the Barbie photo leaks where I don’t want to see any more. It’s all so good, I want to be surprised.

-I love that Casey McQuiston’s bestselling 2019 novel Red, White, and Royal Blue has removed all Harry Potter references from new prints and digital copies. This book changed the whole romance genre and is still being read (and made into a movie!) so this is the right move.

–Mary Mara, best known for her recurring roles in ER and Law & Order, died in an apparent drowning.

-The Sanderson sisters are back! Check out Sarah Jessica Parker, Bette Midler and Kathy Najimy in the trailer for Hocus Pocus 2, which will be streaming Sept. 30 on Disney+.

Michael B. Jordan Is Ready To Take Over The World