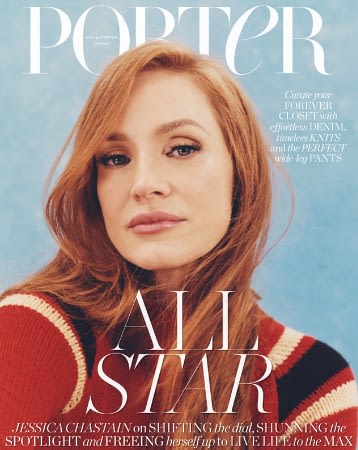 -In her Porter story, Jessica Chastain talked about what it was like to accept her Oscar award right after the Will Smith slap (“I walked into a very charged energy in that room, and I was trying to figure out … how to just breathe and create a calmness”), and choosing projects that reflect today’s political upheaval (“In some sense, we’ve taken for granted this idea, [of] being able to live a life free of violence and someone else making decisions about your welfare, your safety… This idea of reminding us what it is like when one group loses their rights – it’s a trickle-down effect. It affects everyone, and so I think the stories I start looking at will have to deal with that”).

–Colin Farrell recalled working with Tom Cruise on Minority Report — and he wasn’t super flattering. “You know, he’s very competitive and very physically engaged. I remember him walking on the set and screaming, ‘Are we making an action movie? Then why don’t I hear action?’…Did you see the stunts he did on Mission: Impossible where he’s holding onto the side of the plane? I mean, that’s mental illness. That’s not bravery.”

–Ben Affleck and Jennifer Lopez went to a luxury car rental on Sunday, and his 10-year-old son got behind the wheel of a Lamborghini and backed into another car.

–Adrian Grenier and Jordan Roemmele got married in the Moroccan dessert.

–Idris Elba to the rescue? Now that UK broadcaster Channel 4 is up for sale, the actor in reportedly in talks for a $1.2 billion bid.

-According to a Rolling Stone report, Ezra Miller has reportedly been housing a young mom and her 3 children in a gun-filled Vermont farm. A Hawaii father says he is concerned for his young children who are staying with their mom on the actor’s farm — claiming that guns and marijuana are easily accessible to them. Video footage seemed to show 8 firearms in a living room strewn with stuffed animals, while a source says a 1-year-old baby got hold of a bullet and put it in its mouth. But the mother says Miller helped her escape an abusive domestic situation, and the “home ranch has been a healing haven for us.”

–Sharon Stone opened up about suffering nine pregnancy losses over the years.

–Olivia Rodrigo and Lily Allen dedicated their Glastonbury performance of “Fuck You” to the Supreme Court.

-Shazam star Zachary Levi says he underwent three weeks of “intensive life-changing therapy” a few years ago after having a “very active thoughts of ending [his] life.”

-In his new Hulu documentary, Machine Gun Kelly recalls a dark time after his father’s death in 2020, in which he called Megan Fox and attempted suicide. “I’m in my room and I’m like freaking out on her and dude, I put the shotgun in my mouth and I’m yelling on the phone and like the barrel’s in my mouth. I go to cock the shotgun and the bullet as it comes back up, the shell just gets jammed. Megan’s like dead silent.”

–Alan Rickman’s personal diaries are set for posthumous release, with an intro from Kate Winslet.

–Christian Bale said he’d play Batman again if it was in a Christopher Nolan film. Can we just…not?

–Sadie Sink talked to the Hollywood Reporter about all the emotional heavy lifting she had to do in the latest season of Stranger Things.

-I love this casting: Carol Burnett will appear in the final episodes of Better Call Saul.

-The Bob’s Burgers Movie (which I loved) will be available on HBO Max on July 12.

-Speaking of movies I loved, Good Luck To You, Leo Grande is not streaming on Prime. It’s soooo good.

-The early reviews for Thor: Love & Thunder are especially glowing when it comes to Natalie Portman’s part. I never doubted it.

-Reviews for The Bear, FX’s 8-episode show that just dropped about a fine dining chef who returns to Chicago to work in his brother’s sandwich shop, are glowing.

-Here’s the trailer for the upcoming fourth season of What We Do in the Shadows.

-An naive 26-year-old embarks on an affair with her employer (Jon Bernthal) in the Lena Dunham-directed Sharp Stick.