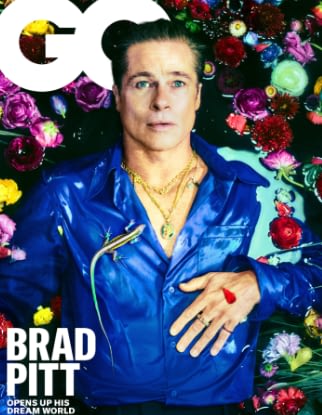 -I’m so confused by this GQ cover shot of Brad Pitt. Despite the online chatter, I think his face mostly looks like that because he’s lying down and gravity is doing its thing, because he looks great in the other photos from the shoot. But this one with the flowers, the floating, the faraway gaze — it’s giving me deceased. In the interview, he talks about quitting smoking during the pandemic because he realized he couldn’t do it moderately (“I don’t have that ability to do just one or two a day. It’s not in my makeup. I’m all in. And I’m going to drive into the ground”), spending a year and a half attending Alcoholics Anonymous meetings (“I had a really cool men’s group here [in L.A.] that was really private and selective, so it was safe, because I’d seen things of other people, like Philip Seymour Hoffman, who had been recorded while they were spilling their guts, and that’s just atrocious to me”), and how a conman convinced him to spend a year searching the grounds of his French mansion for buried gold taken from the Levant during the Crusades (“I got obsessed. Like for a year, this was all I could think about, just the excitement of it all. Maybe it has something to do with where I grew up, because in the Ozark Mountains there were always stories of hidden caches of gold”).

-Here’s the first official portrait of Prince William and Kate Middleton. Yup, that looks like them.

–Meghan Markle sent snacks and coffee to a group of women campaigning for safer gun laws with a note that says “Please know that while you may feel exhausted by your endless hours of dedication to this cause, I hope you feel energized in knowing that the work you’re doing is vital and so deeply appreciated. As a mom, as a friend, thank you so much!”

–Katy Perry gives really good tips — even if the waitress has no idea who she is and makes her wait for a table.

–Billie Eilish says she used a body double for a part of her Coachella performance and no one noticed.

-A judge awarded Ed Sheeran and his fellow songwriters more than $1 million in legal fees following their victory in a plagiarism suit.

-Are people actually watching Chrissy Teigen‘s court show on Roku? They must be, because it just got renewed for season 3.

-Every new pic from the Barbie movie gets me more and more excited.

-Justin Timberlake took to his Instagram stories to “apologize” for his bad dancing video that went viral.

-This is going to get expensive: Rupert Murdoch and Jerry Hall are reportedly getting a divorce.

–Zoey Deutch and Dylan O’Brien star in the Not Okay trailer about a girl who goes viral for all the wrong reasons.

Tatiana Maslany Gets Cloned for Flare