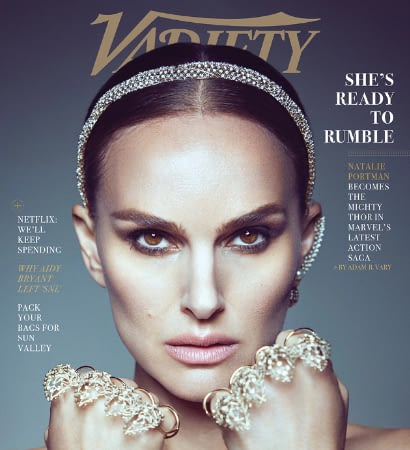 -I love the comeback Natalie Portman seems to be poised for with her return to the Marvel universe.  In her Variety cover story, she talks about packing on muscle for the new Thor movie (“On Black Swan, I was asked to get as small as possible. Here, I was asked to get as big as possible. That’s an amazing challenge — and also state of mind as a woman”) and Taika Waititi’s directing style (“There’s a script, but most days, he prefers to throw it completely away and just spitball. It’s a really baller way to work on a movie like this. It was daunting at first, because I was like, there’s no way for me to prepare. How am I supposed to do a good job? And then I think I learned how to enjoy it”).

-Meanwhile, Chris Hemsworth says his castmates beat him in an ice bath challenge. “We had a big ice bath there, which we’d rotate through, and that became the real test of strength. I’d done it a bit, but I sort of was keeping my time in there to a minute or two, and [Tessa Thompson] came in the first day and did three and a half minutes. So then we all had to try and do three minutes.”

–Kate Bush gave a rare interview to talk about her sudden popularity with the young ‘uns, and confirmed that she wrote “Running Up That Hill” about a couple who gender-swap to understand each other’s perspectives. “Originally it was written as the idea of a man and a woman swapping places with each other, just to feel what it was like, from the other side.”

–Florence Pugh will star in a new Netflix series based on John Steinbeck‘s East of Eden, executive produced by Zoe Kazan. (The way Vulture positioned this story was gross. Kazan has already addressed — very eloquently — her family’s past.)

-As someone who works for a marketing agency, I love what Ryan Reynolds is trying to do here.

-Actors need to stop calling their TV projects long movies. You’re in a TV show. Get over it.

-I’m in no way surprised that Madonna refused to wear what wardrobe pulled for her when she guested on Will & Grace.

–Sam and Aaron Taylor-Johnson are still going strong after 10 years of marriage.

-The trailer for Lyle, Lyle Crocodile starring Javier Bardem, Constance Wu and Shawn Mendes as the voice of Lyle the Crocodile has been released.