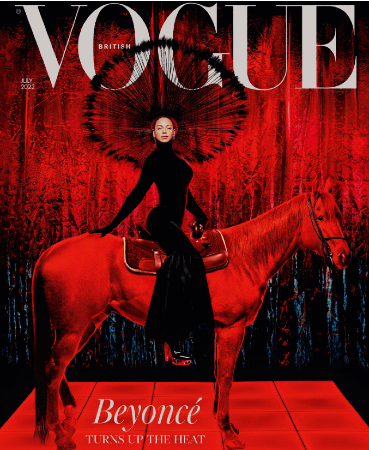 -British Vogue dropped a surprise Beyonce cover today. Though she stuck with her “no interviews” policy, she did let editor in chief Edward Enninful listen to the new album she’s working on (titled Renaissance Act 1 and dropping July 29), and it sounds like she’s entered her disco era. Here for it.

–Bradley Cooper credits Will Arnett for helping him get sober. On  Arnett’s podcast Smartless, Cooper said that after he “got fired/quit” Alias “Will took that risk of having that hard conversation with me in, like, July of 2000 and that put me on a path of deciding to change my life.”

-While promoting his new Apple TV show, Tom Hiddleston was asked about his engagement to Zawe Ashton, his co-star in a 2019 West End revival of Betrayal. “I’m very happy.”

-Riverdale actor Ryan Grantham shot his mother in the back of the head as she played piano and then allegedly loaded his car the next day with guns, ammunition, Molotov cocktails, camping supplies, and directions to Justin Trudeau‘s home.

-This is a great conversation with Jeff Bridges. “Are you hip to PEN15?”

-Today’s Variety Actors on Actors pairing is Sydney Sweeney and Christina Ricci. Sweeney insisted she’s never felt uncomfortable shooting a Euphoria sex scene, while Ricci told her that when she had to do a nude scene once “The thing that made me more uncomfortable was other people being uncomfortable with me being naked. So what I did, you probably wouldn’t be allowed to do this now: I just stayed naked…I was like ‘Don’t make me feel weird like I a person who has to be ashamed,’ so I just stayed naked. And I would talk to crew members naked because I wanted everyone around me to stop reacting to it. ”

–Selena Gomez, Amy Schumer, Quinta Brunson, Tracee Ellis Ross, Bridget Everet and Molly Shannon got together for THR’s TV Comedy Actress Roundtable. Shannon praised Gomez for staying cool when they once were surrounded by the paparazzi, while Brunson opened up about the expectation that she should always be ready to share her political opinions.

-I don’t know why the announcement took so long, but Hacks has finally been renewed for season 3.

-Here’s the Westworld season 4 trailer. I forgot that Tessa Thompson is still trapped on this show.

–Jerrod Carmichael‘s take on Dave Chappelle and cancel culture in this GQ profile is pretty great: “[Cancel culture is] not true. Who’s getting canceled for what they’ve said? What does that mean, that people are mad on Twitter? Everybody’s fine. These grown men are fine. I think, a lot of times, people who offer nothing truthful or meaningful about themselves then complain about society at large and create this boogeyman. It’s like, listen, that’s the most urgent thing in your life? God bless you. I’m tired of hearing it. Chappelle, do you know what comes up when you Google your name, bro? That’s the legacy? Your legacy is a bunch of opinions on trans shit? It’s an odd hill to die on. And it’s like, hey, bro. Who the fuck are you? Who do you fuck? What do you like to do? Childish jokes aside, who the fuck are you? It’s just kind of played. But he’s choosing to die on the hill. So, alright, let him.”

-This is a really interesting piece on how white women writers are hypersexualizing Asian women onscreen.

-The movie Katie Holmes directs and stars in is getting decent reviews out of Tribeca.

–Harry Styles, David Dawson and Emma Corrin are caught in a love triangle in the trailer for My Policeman.