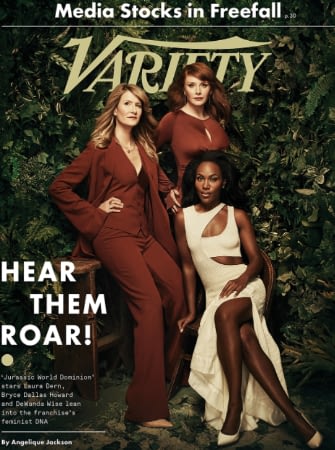 -It’s interesting to me that the new Jurassic Park seems to be marketing itself as the franchise’s feminist evolution. Variety’s new cover features Jurassic World Dominion stars Laura Dern, Bryce Dallas Howard and DeWanda Wise, and it’s a lovefest between the trio.  Dern says of Wise’s casting: “It wasn’t about color, sex or anything. It was about finding the actor who could be the next Indiana Jones. And this,” she says, pointing to Wise, “happens to be the actor.”

–Kevin Spacey has been charged in England with four counts of sexual assault.

-Oh god, this is sad and shocking: Ray Liotta, best known for Goodfellas and Field of Dreams, has passed away at 67 years old. He leaves behind a fiancée and a daughter. Deadline reported that he died in his sleep in the Dominican Republic, where he was shooting the film Dangerous Waters.

–Jeff Bridges talks about getting Covid after chemo. “I was pretty close to dying. The doctors kept telling me, ‘Jeff, you’ve got to fight. You’re not fighting.’ I was in surrender mode. I was ready to go. I was dancing with my mortality.”

-This is a huge get for HBO: Jodie Foster is going to star in True Detective season four.

-During Thursday’s episode of The Kardashians on Hulu, Kourtney Kardashian says a fertility expert told her to drink Travis Barker’s semen four times a week. Was the expert on Barker’s payroll?

-Wow, Alan Ritchson, the guy who plays Reacher, is going hard in his IG comments. Respect.

-The Star Wars celebration event led to lots of news, including the announcement that Jude Law will lead a new Star Wars series from Jon Watts and Chris Ford.

-The biggest thing to come out of Celebration was the first teaser for Andor, the Disney+ series that stars Diego Luna and takes place five years before the events of Rogue One.