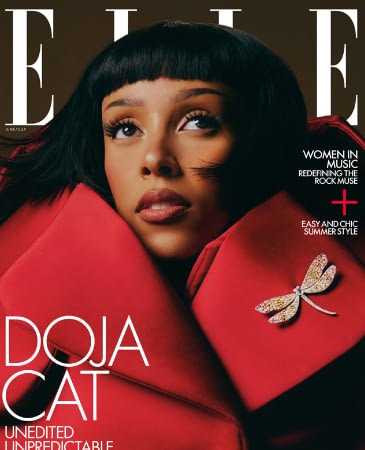 –Doja Cat covers Elle’s Women in Music issue and talks about being on social media (“I put a lot of things out there about myself. I’m just constantly on live. Sometimes I look at myself and I’m like, Well, if you could just f**king turn off your phone for, like, five minutes…”), and being a musical shape-shifter (“I play with genres that I’m not really used to, and I’m inspired by things that are new to me. That’s the game of it all”).

-Are music labels forcing artists to make TikToks? Ed Sheeran and Halsey are the latest to complain about it.

–Kristen Stewart talked to Vulture about her new Cannes film, Crimes of the Future, and the nature of celebrity. “You know so clearly which actors like to act and which actors just like to be famous. It’s so fucking obvious. It’s very clear. Why don’t we just say it? I mean, I do, but the people who just want to be the center of attention: ‘I love it! That’s why I got into this.’ Instead of being like, ‘Oh, it’s the art!’ I’m like, ‘Is it?'”

-Speaking of Kristen Stewart, I’m not sure Chanel is doing right by her this week.

-Speaking of Cannes interviews, Julia Roberts is there to present this year’s Trophée Chopard, and she told Variety, “When people say, ‘What advice would you give to an actor?’, I would say the first thing I would say to any actor is don’t take advice from actors. It would be the worst thing to do because we all have our unique experience.”

–Billie Eilish opened up about living with Tourette Syndrome.

-The Kravis wedding was insane and I’m very into it.

–Florence Pugh took to her IG stories to deny reports that she’s dating Will Poulter, saying he was just among a group of friends that she vacationed with.

–Ricky Gervais released his Netflix comedy special SuperNature this week and about five minutes in, he took aim at trans women. This is what Netflix wants now. They don’t spend this many millions on this crap unless it’s on brand.

-Meanwhile, some John Mulaney fans felt ambushed over the weekend when he invited Dave Chappelle to be a surprise guest at his show, and Chappelle opened with anti-trans jokes. I’m so tired.

-This is an interesting Vox piece wondering if Amber Heard is the first target of a new extremist playbook. At this point, she’s pretty unlikely to lose the defamation case (assuming the ruling is based on the evidence that’s been presented), but how’s that going to go over with the people who assume Depp has it in the bag because their SM feeds are filled with posts from the bot armies and men’s rights activists? (The fact that I’ve seen multiple level-headed, feminist mutuals use the phrase “mutual abuse” in the past few weeks like that actually exists makes me worry that the fallout from this trial is going to be incalculable.)

-Meanwhile, Kathryn Arnold testified that Aquaman director James Wan and star Jason Momoa were the only reasons Heard was not booted from the Aquaman sequel after Depp tried to get her fired.

-A Disney chief had a different take, saying the reason she was almost dropped from the franchise was over a lack of chemistry between her and Momoa.

-Speaking of disrupted concerts, whatever is going on with Conor Oberst sounds very sad.

-People are losing their mind over the wild sex scene in this week’s The Time Traveler’s Wife. It was also in the book (but I don’t remember it being so explicitly spelled out.)

–James Gray clearly articulates Hollywood’s need for a bunch of narrative styles, voices and genres, and why the dominance of one type of movie at the theatre is bad for everyone. “When you make movies that only make a ton of money and they’re only one kind of movie, you begin to get a large segment of the population out of the habit of going to the movies. And then you begin to eliminate the importance of movies culturally…[If I say] ‘I’m gonna make him an offer he can’t refuse’ you know instantly what movie that is. You cannot quote me a single line from Aquaman.”

-It’ll be interesting to see if Letitia Wright tries to walk back her anti-vax takes as the Black Panther press tour heats up. She isn’t yet. When asked what she’s learned during the pandemic, she told Variety, “I’ve learned that in life, you just have to keep going strong with what you believe in.”

-There’s lots of chatter that the person behind DeuxMoi was revealed this weekend, and Hailey Bieber (who previously said she knew who it was) seems to have corroborated it.

–Seth Green’s Bored Ape NFT, which was set to star in its own animated show, was stolen in a phishing scam. Since the actor no longer owns the rights, the show cannot move forward.

-A24 has won the North American rights to the critical Cannes darling Aftersun, starring Paul Mescal and newcomer Frankie Corio. In other deals, Wild Four O’Clocks starring Michelle Pfeiffer was bought by Sony.

–Ryan Gosling, Chris Evans, Ana de Armas, Regé-Jean Page, Alfre Woodard and Billy Bob Thorton star in the new trailer for The Gray Man, directed by the Russo Brothers. It will hit theaters on July 15 and start streaming on Netflix a week later.

The Flash is a Ratings Superhero