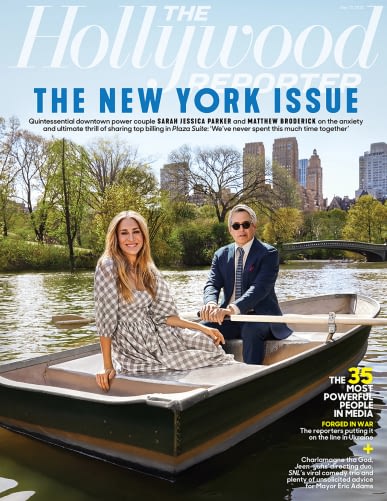 –Sarah Jessica Parker and Matthew Broderick did a joint interview for THR, and talked about the backlash to And Just Like That (“We care that they’re engaged and enjoying it, flipped out, upset, thrilled, devastated, but you can’t have a result in mind and then try to back into it with the writing”), how she hasn’t spoken to Chris Noth since he was dropped from the show when the sexual abuse allegations broke (“I don’t even know if I’m ready to talk about it, but I don’t think … I wasn’t reacting as a producer”), and doing a play together (“We’ve never spent this much time together ever, even before we had kids”).

–Jason Momoa is reportedly dating Eiza González, and it’s serious enough his camp seems to be giving quotes about it to People. (Or maybe he’s trying to distract from the Sistine Chapel thing.)

-This sentence sounds fake but it isn’t: Helen Mirren and Harrison Ford are heading to the small screen in a Yellowstone spinoff.

–Cara Delevingne‘s was WILD at the Billboard Awards, and it’s no wonder Megan Thee Stallion cropped her out of the photos she shared on IG.

-Poor Britney Spears. She announced that she and her fiance Sam Asghari had a miscarriage in an Instagram post on Saturday.

-This is a good interview with Jack Antonoff about music, but mostly because it also touches on his relationships with Margert Qualley, Lena Dunham, Scarlett Johansson.

–Amber Heard testified today that the size of her role in the upcoming Aquaman sequel was reduced because of the ongoing controversy around her breakup with Johnny Depp.

-People are having a lot of strong reactions to this Vanity Fair piece on the Star Wars universe, mostly because Kathleen Kennedy says recasting doesn’t work (despite the fact that they’re debuting a series this week starring an actor recast as the younger version of the original).

-After a long break, Charlie Brooker’s Black Mirror will return to Netflix for season six.

-The Boys are back on June 3. Here’s the trailer for the new season.

-Here’s the trailer for Netflix’s Spiderhead, starring Chris Hemsworth as a scientist who runs a state-of-the-art penitentiary and performs mind-altering drug trials on his prisoners (including Miles Teller and Jurnee Smollett).

-The first trailer for Disney+’s She-Hulk: Attorney at Law, starring Tatiana Maslany and Mark Ruffalo, just dropped. I laughed multiple times so I’m digging the tone but visually when she hulks out it looks…not good?