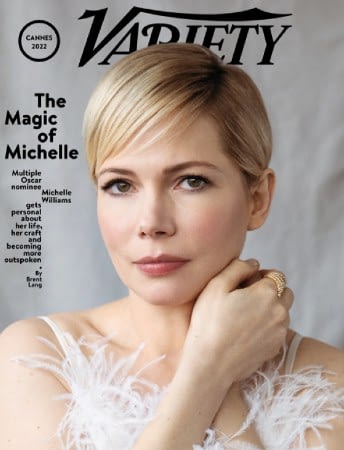 -In her new Variety cover story, Michelle Williams reveals that she’s expecting her third child (“It’s exciting to discover that something you want again and again, is available one more time”), defends Succession star Jeremy Strong, who she says helped her family survive the loss of Heath Ledger (“Jeremy was serious enough to hold the weight of a child’s broken heart and sensitive enough to understand how to approach [her] through play and games and silliness…[Matilda] didn’t grow up with her father but she grew up with her Jeremy and we were changed by his ability to play as though his life depended on it, because hers did”), and playing Steven Spielberg’s mother in his upcoming semi-autobiographical film (“I couldn’t comprehend that he might want to work with me”).

-Grey’s Anatomy alum Jesse Williams had a big day yesterday. First, he was nominated for a Tony for his role in Broadway’s Take Me Out. The play involves a shower scene in which he goes full frontal, and strict cell phone rules were supposed to stop audience members from taking photos. Alas, it didn’t work and pics and video of him nude were all over Twitter.

–Christine Baranski was gifted the photo of herself giving Elon Musk a death stare at the Met Gala. Perfection.

–Fred Savage, who was recently fired as exec producer on the Wonder Years reboot following allegations of misconduct, has spent the past few years directing on hit TV shows. Now sources tell People he had a reputation for doing “more takes than necessary” and being “quick to anger” on sets.

-Celebrity chef Mario Batali was found not guilty today on a charge of indecent assault and battery stemming from an alleged 2017 groping incident in a Boston bar.

-Is Taylor Swift planning a double surprise this Friday?

–Britney Spears posted multiple variations of the same racy pic on Instagram this week, and people are freaked out about it because they have too much time on their hands. Let her do what she wants.

-Netflix continues to scramble, and have pushed up their plans to launch an ad-supported version.