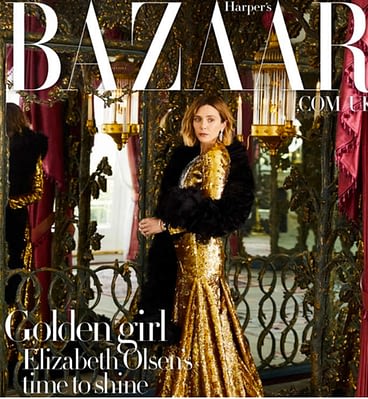 –Elizabeth Olsen covers the digital edition of Harper’s Bazaar and talks about fame (“It’s always weird for an actor to complain about being in the public eye, because that means maybe something’s going well for you”), and growing up having Ashley and Mary-Kate as older sisters (“I felt very clear about how I was going to navigate lots of things because of watching them. I also felt very protected”).

-Doctor Strange in the Multiverse of Madness opened huge with $185 million in North America this weekend and $450 million globally.

-In an interview with Elle UK, Game of Thrones star Sophie Turner shared that she had an eating disorder, largely fueled by social media trolls. “For a long time, I was quite sick with an eating disorder and I had a companion … a live-in therapist, who would ensure I wasn’t doing anything unhealthy with my eating habits…I looked at the comments on Instagram and think, ‘Oh, f—. Everyone thinks this about me.’ It would completely consume me.”

–Nick Jonas and Priyanka Chopra shared their first photo of daughter Malti on Mother’s Day, revealing that their baby girl spent more than 100 days in the NICU.

-Here’s Lady Gaga’s music video for her song on the Top Gun: Maverick soundtrack, featuring scenes from the film.

–Frank Langella responded to being fired from Netflix’s The Fall of the House of Usher with guest column in Deadline, which he starts with “I have been canceled. Just like that.” He says the actress who plays his wife walked off the set (along with the intimacy coordinator and director) after he touched her leg in a scene, despite that not being done in blocking. “It was a love scene on camera. Legislating the placement of hands, to my mind, is ludicrous. It undermines instinct and spontaneity.” Dude, your whole job — your WHOLE JOB — is to take direction.

–Fred Savage has been fired as the exec producer on the Wonder Years reboot following an investigation into multiple complaints of misconduct, which allegedly included verbal outbursts and inappropriate behavior.

-Just in case she wasn’t already in enough trouble comes news that Kim Kardashian wore not one, but two of Marilyn Monroe’s historic dresses to the Met Gala. Apparently, she also wore the Norman Norell dress that Monroe wore to the 1962 Golden Globes.

-This is a great interview with Joe Alwyn, who talks about his new show Conversations with Friends, writing songs with Taylor Swift on Folklore and magpies.

-A Crazy Rich Asians spin-off movie is finally in the works. It’ll revolve around a romance between Gemma Chan and Harry Shum Jr.‘s characters.

-This is an excellent piece on how streaming, the pandemic, the unsustainable pace and the severe lack of mentoring and training have made being a TV showrunner an impossible job.

-Huh. HBO Max has given a script-to-series order to Anon Pls, a one-hour drama based on DeuxMoi’s upcoming debut novel, from Berlanti Productions and Warner Brothers Television.

-Here’s the first teaser trailer for Avatar: The Way of Water. This does absolutely nothing for me.