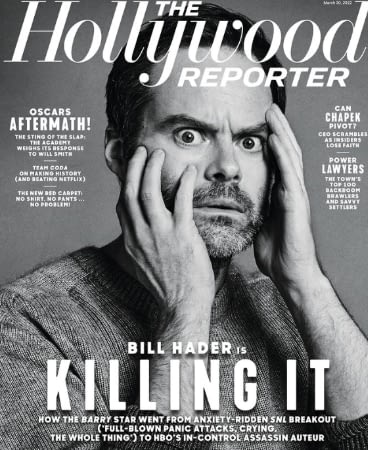 -Playing an assassin who is really good at a job that makes him miserable on Barry hits surprisingly close to home for Bill Hader, who suffered crippling anxiety while on SNL. In his THR cover story, he said, “The live aspect of SNL — I’m just not built for it. Before shows, I would go into a bathroom that was way down this hall, go into a stall and have a full-blown panic attack, crying, the whole thing. And then I go and get in a giant banana costume.” He also declined to discuss his relationship with Anna Kendrick, saying he doesn’t talk about his dating life for the sake of his three daughters. “They just want me to be their dad. They just want me to sit and watch Encanto over and over and over again. So that’s what I do.”

-I’m not loving this viral Trevor Noah riff on the type of movies nominated for the Oscars. CODA, West Side Story, King Richard and Belfast were crowd-pleasers that even my mom enjoyed! Dune was a huge hit with the two hottest young stars in Hollywood! This year’s crop of nominees were all not “the vegetables of movies” and there’s gotta be something other than Marvel superhero smash ups at the theatre.

-America’s Next Top Model: All Stars stripped Angelea Preston of her crown 11 years ago after producers learned that she’d briefly worked as an escort. Now, she’s telling her side of the story.

-This is a good piece on why HBO’s The Gilded Age doesn’t work in 2022. “The Gilded Age seems stuck in an era of past television, an era where interesting characters and pretty cinematography can hold a slow-paced show together.”

–Alanis Morissette sang along to the orchestral cover of “You Oughta Know” that was featured in Season 2 of Bridgerton and this is SO GOOD!

-This is an interesting take on Bridgerton season 2’s diversity problem. I thought race was handled much better than the first season, but it still only matters when it’s convenient to the story.

–Season 2 of FX’s Feud will be about Truman Capote stabbing several of his female friends — whom he called his “swans” — in the back by publishing a roman à clef short story about them in Esquire in 1975. Naomi Watts will star as socialite Babe Paley and every episode will be directed by Gus Van Sant.

-As someone whose X Files fandom once led her to watch a LOT of David Duchovny projects, I appreciated his lookback at his career, from The X-Files to Twin Peaks to The Chair.

-China continues to turn its back on Hollywood blockbusters.

-This is a charming interview with Christopher Walken, who has two big shows on streamers right now.

-Is anyone still watching Severance? It’s gotten so great but I don’t feel like I’m hearing lots of buzz around it. In any case, I really liked this interview with Jen Tullock, who plays Mark’s sister.

-Speaking of Apple TV shows, Slow Horses, which stars Gary Oldman and Kristin Scott Thomas and premieres this week, is getting good reviews.

–Elisabeth Moss investigates a serial killer who she once escaped from in Apple TV’s Shining Girls.