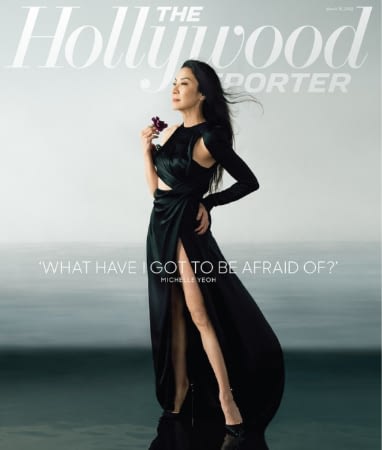 –Michelle Yeoh — the ballerina turned beauty queen turned martial arts star turned screen legend — finally gets her first top billing in a Hollywood theatrical feature with Everything Everywhere All at Once, which is earning raves. She talks to THR about stepping into the spotlight and overcoming adversity.

-In her new Vogue cover story, Bella Hadid reveals that she had a nose job at 14, but now regrets it. “I wish I had kept the nose of my ancestors. I think I would have grown into it.”

–Kim Kardashian says Pete Davidson has “a few” tattoos dedicated to their relationship, as well as a “branding” of her first name.

-Meanwhile, Kanye West‘s latest wild jab is that he fears Pete will get Kim into drugs.

-This is a great interview with Joe Wright on Cyrano and how The Woman In The Window ended up being far removed from what his original vision was. “The film that was finally released was not the film that I originally made. I was like, ‘Oh, fucking hell. You live and you learn.’ It got watered down…There’s a great scene where she had sex with the bloke downstairs and stuff like that. It was very different.”

-Oh god, Russell Brand called Trudeau a ‘tyrant’ for his handling of the trucker protest and parroted Russian state propaganda about Ukraine.  (But he rejects the alt-r*ght label.)

–Norman Reedus is recovering after getting a concussion on the  Walking Dead set.

-I’m really liking everything Anne Hathaway is wearing on the We Crashed promo tour. That trans flag purse!

-There are many, many things I disliked about Licorice Pizza but wow the Asian accent thing is way up there.

–Claire Danes and Tom Hiddleston are starring in a new period limited series for Apple and I want it now.

-Speaking of shows I want now, Starstruck Season 2 starts March 24 on HBO Max. Here’s the new trailer. (The Lost City, Sanditon, Bridgerton and Starstruck all dropping in the same week is huge for Romancelandia.)

-Barry season 3 has its first trailer.

-SNL’s Vanessa Bayer chases her lifelong dream of becoming a home shopping channel host in the trailer for Showtimes’ I Love That For You.

Captain America: Civil War – Are You #TeamIronMan or #TeamCap?