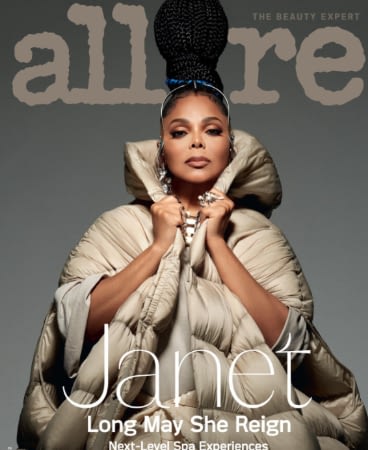 –Janet Jackson is on the February cover of Allure, and the Tim Munro-shot photoshoot looks like something out of dystopian movie that I really want to see. She talks about life in England, why she produced a documentary about herself, and how the way the world interacts with female artists has shifted.

–Alia Shawkat says was “shaken up” by the “gross and stupid” rumors surrounding her relationship with Brad Pitt — but he had no idea. “I was like, ‘You know everyone thinks we’re dating? And there’s this whole thing, and I’m being followed.’ And he was like, ‘I’m sorry. It happens. If you hang out with me, it happens.’ He had no awareness of it at all.”

–Olivia Munn posted a pic of John Mulaney with their new son.

-In perfect casting news, Sharon Stone will play Cassie’s mom in season 2 of The Flight Attendant.

-Wow, new episodes of Starstruck are landing next month?! The first season was adorable.

-The trailer for Ava DuVernay’s new show, which premieres tonight on the CW, actually looks great.

-After three years without one, the Oscars is getting a host again. There’s no word on who yet.

-Why does Reese Witherspoon keep posting about crypto? At first I assumed it was just her social agency but there’s been enough posts (and wild reaction to them) that she’s got to be approving them, if not actively pushing them. Someone send Ben McKenzie her contact info.

–Andrew Garfield says he once lost out on a role to Ben Barnes for being “not handsome enough” — even though those two actors are often mistaken for each other.

-Awful: Sinead O’Connor’s 17-year-old son, Shane, was found dead in Ireland after she reported him missing.

–Alec Baldwin took to Instagram to call reports that he’s not cooperating with the Rust investigation “bullshit.”

-Drive My Car keeps topping awards lists and I feel bad that I couldn’t make it past the two-hour mark on that film.

-Here’s the first trailer for the Bob’s Burgers Movie, something I totally forgot was happening but am glad it is (I’d be even more glad if it was streaming instead of just in theatres).

-The trailer for The Worst Person in the World doesn’t do much for me, but audiences have LOVED this movie at festivals.

Sterling K. Brown Got To Finish His Emmy Speech

Blake Lively Really Wants You To See Her $2M Rings