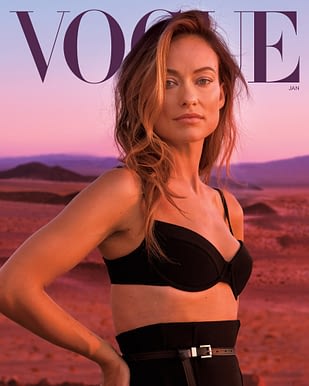 –Olivia Wilde is on the cover of Vogue to promote … well, I don’t know what she’s promoting, but she vaguely references her relationship with Harry Styles. “It’s obviously really tempting to correct a false narrative. But I think what you realize is that when you’re really happy, it doesn’t matter what strangers think about you. All that matters to you is what’s real, and what you love, and who you love.”

–Madonna‘s daughter Lourdes Leon is on the cover of Paper.

–Miley Cyrus and Pete Davidson revealed they got matching tattoos after doing an SNL episode together in 2017.

-HBO is in initial talks to reboot Six Feet Under. That show has what is universally acknowledged to be one of the best series finales ever; why risk tainting that legacy?

-This story is SO WEIRD: police bodycam video recorded on Jan. 4, 2021, shows Kanye West’s publicist telling a Georgia election worker who Trump falsely accused of manipulating votes that she was in imminent danger. The publicist, Trevian Kutti, who’s a Trump supporter, urged the election worker to confess to fraud and seemed to threaten her and her family.

–Florence Pugh claimed on her Instagram Story that she had been blocked from posting about her appearance on a Marvel show, which is weird. Is Disney controlling Instagram?

-Ghosts feels like the only network hit to come out of the fall shows. They’ve released bloopers from the first season.

-Peloton had to put out a statement after their product was featured in a shocking plot twist in the Sex and the City reboot. IYKYK.

-I think releasing just two eps of the reboot was a mistake because the first couple are so dour, depressing, and trying too hard to fix past representation mistakes (my friend and I literally fast-forwarded every scene with Miranda and her prof because it was too cringe), but according to critics the next two episodes are more in line with the tone of the original series.

-Cowboy Bebop had so much hype before it debuted, but Netflix has already canceled the anime adaptation after one season.

–Jussie Smollett has been convicted on charges he staged a hate crime against himself in 2019 and then lied to police about it.

-Here’s the trailer for HBO’s Lakers show (aka the reason that Will Ferrell and Adam McKay are no longer friends).

–Kristen Bell stars in a satirical series that takes aim at psychological thrillers in the awkwardly (but hilariously) titled The Woman in the House Across the Street from the Girl in the Window.