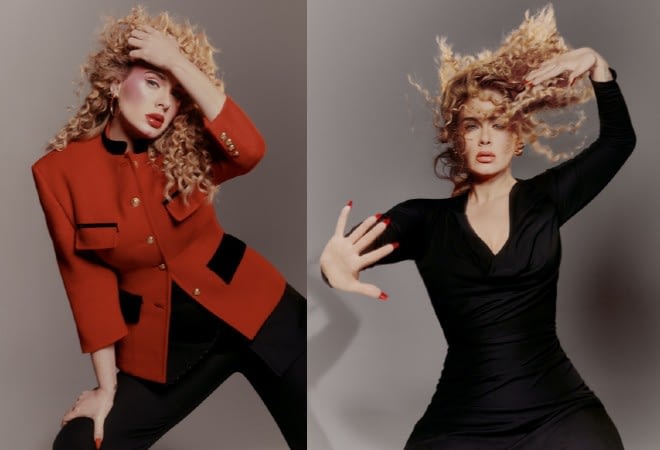 -I adore this 80s-ish photoshoot with Adele for The Face. In the interview, she talked about her ex-husband, Simon Konecki and why she was so drawn to him. “I was like, ‘I’d be a f**king damn fool to walk away from this man being the father of my child compared to any other man that I encountered before or after up until recently, phew! I would’ve regretted that, forever.”

-Meanwhile, she told Apple Music that she isn’t making music for TikTok. “I’d rather cater to people who are on my level in terms of the amount of time we’ve spent on Earth and the things we’ve been through.”

-It’s happening. Sources tell E! News that Kim Kardashian and Pete Davidson are indeed dating after they were photographed holding hands in Palm Springs. “He makes her laugh the entire time they are together and she is completely enthralled by him.” (People are amused/scandalized that she’s wearing Yeezys in the photos.)

–Jennifer Lawrence and her baby bump attended a screening of Don’t Look Up (though I’m much more focused on what Meryl Streep and Jonah Hill are wearing).

–Sam Asghari attended the House of Gucci premiere (which is…huh) and talked about his plans with Britney Spears. “We’re getting ready for a wedding, baby!”

–Simu Liu tries to keep the peace between Saweetie and Kyle Mooney in his SNL promo.

–Blake Lively is promoting her new line of mixers — but it doesn’t sound like she’ll be enjoying them herself. “I don’t drink because I don’t like the effects of alcohol, but I like being a part of it.”

-In a new Hawkeye clip, Clint and Kate play with fire to take down the Tracksuit Mafia. Meanwhile, the NYT profiles Jeremy Renner, who somehow has two shows dropping at the same time: Hawkeye and Mayor of Kingstown.

-The Office’s Brian Baumgartner (who played Kevin) wrote a new book about the show, and in it John Krasinski talks about the only scene he pushed back on, which saw Jim make out with Pam’s replacement Cathy when Pam was on maternity leave. “That’s the only time I remember putting my foot down…I remember saying things that I never thought I’d say before, like, ‘I’m not going to shoot it.’ There is a threshold with which you can push our audience. They are so dedicated. We have shown such great respect to them. But there’s a moment where if you push them too far, they’ll never come back. And I think that if you show Jim cheating, they’ll never come back.”

-Speaking of The Office, Mindy Kaling was on Kelly Clarkson’s show and they tried her character Kelly Kapoor’s “disgusting” favourite cocktail.

-This is a really great read on the state of made-for-cable holiday movies.

–Jonah Hill is set to play Jerry Garcia in a film about The Grateful Dead from Martin Scorsese.

-Discovery+ is planning a documentary on the tumultuous relationship between Johnny Depp and Amber Heard.

–Serena Williams and Naomi Osaka are the latest to call for an investigation after tennis player Peng Shuai went missing after accusing a former top official of sexually assaulting her.

-Here’s an interesting interview with Jason Reitman, in which he talked for an hour about a lot of things that have besides the movie he was promoting.

-I’m bummed for John Cho that the reviews for Cowboy Beebop are not good.

–Mariah Carey is back with another holiday event on Apple+, this one featuring Khalid, Kirk Franklin, Apple Music personality Zane Lowe and her twins, Moroccan and Monroe. Here’s the trailer.

–Chloë Grace Moretz plays a pregnant woman warring against A.I. in the trailer for Hulu’s Mother/Android.

Chris Evans Decks His Dog in Knives Out Sweater