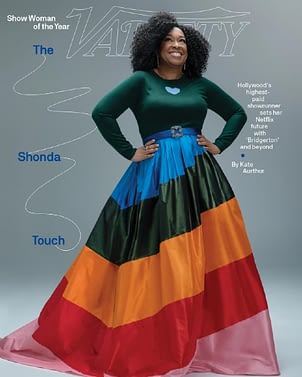 -Variety named Shonda Rhimes the Show Woman of the Year. The highest paid showrunner in TV talked about moving from ABC to Netflix (“Creatively, I feel very fulfilled in a way that I haven’t felt fulfilled in a long time”), the success of Bridgerton (“What I loved was we were going to create this powerful, exciting, amazing romance. And then for once in television, they were going to get to have their happily ever after versus — well, you know! In network television, you have to come up with 15 years of why a couple has to be apart”), and whether Regé-Jean Page will ever return to the show (“I don’t think so! And here’s why. He’s an enormous star now. As I like to say, the idea that we would write Regé to stand around in the background doesn’t make any sense at all to me. ‘What would he do?’ is what I like to say”).

-So those sources claiming Kim Kardashian and Pete Davidson are “just friends” may be rethinking things…the pair were spotted enjoying a private dinner last night. And it must be love, because she traveled to Staten Island for him.

-Wait, is Pete Davidson the Warren Beatty of his generation? I don’t buy it; Beatty had huge hits, not just BDE.

–Jamie Spears has requested the end Britney Spears‘ conservatorship immediately.  However, the singer’s lawyer questioned whether Jamie was “motivated by a desire to bolster his reputation or to avoid his deposition or responding to the outstanding discovery served on him in August.”

-Meanwhile, in a since-deleted Instagram post, Spears blamed her mother for the conservatorship. “What people don’t know is that my mom is the one who gave him the idea. I will never get those years back… she secretly ruined my life. You know exactly what you did. My dad is not smart enough to ever think of a conservatorship, but tonight I will smile knowing I have a new life ahead of me.”

-In his new memoir, Will Smith says he dreamed about killing his father after witnessing him abuse his mother when he was a boy. “As a child I’d always told myself that I would one day avenge my mother. That when I was big enough, when I was strong enough, when I was no longer a coward, I would slay him.” He also talked about how his method acting on the set of Six Degrees of Separation caused him to fall “in love” with his costar Stockard Channing during his first marriage.

-Hmmm…not really sure that Salma Hayek comes off the way she intended in her interview with The Guardian. When asked about being bullied by Harvey Weinstein and if she thinks the reason he never assaulted her was that she was friends with Robert Rodriguez, Quentin Tarantino and George Clooney, she replied, “Also I was very strong…I didn’t just say no. I’m a force to be recognized. He never saw me weak. It’s not that I’m not afraid, but you’re not going to see it. I can be almost intimidating in my calm strength, you know?”

–Dakota Johnson is dating Gwyneth Paltrow‘s ex-husband Chris Martin, and the ladies seem to genuinely like each other. Paltrow caught a lot of crap for her “conscious uncoupling” announcement — but it seems like it actually worked?

–Ryan Reynolds announced that he’s taking a break from movies. “I’m just trying to create a little bit more space for my family and time with them. You know, you don’t really get that time back.” Stay home with the kids so Blake can make A Simple Favor 2!

-Jeez. Dean Winters, a character actor who’s best known from 30 Rock and Oz, has undergone multiple amputations since contracting a bacterial infection in 2009.

–Tom Hanks paid tribute to his Bosom Buddies costar Peter Scolari on Jimmy Kimmel‘s show: “We were molecularly connected in a way that we started speaking the same language.”

-Buzzfeed had Ben Barnes read some thirst tweets about himself, and he was very shy and polite about the whole thing.   “Noooo! You’ve got parents!” “Someone from Buzzfeed has just come in and told me why Bussy means, and that’s why my face is going red.”

–This is the kind of TV criticism that should be used as a framework for all reboot reviews: “Dexter: New Blood is worse than Seasons 1-4 and better than the last few seasons, which should be enough for many/most/some fans.”

-Starz has renewed Heels for season 2. I have to finish the last few episodes but I was really getting into it.

–Leah Remini has guest-hosted the majority of the Wendy Williams Show’s premiere week episodes while Williams is off with health issues — and the ratings have gone up.

-I can’t imagine Alec Baldwin‘s lawyers are happy about his reposting stuff like these these days.

-I’m late to the Dune party, but this is a very good piece on how Denis Villeneuve’s Part One ignores the influence of MENA cultures and Islam.

–Jared Leto becomes a vampire in the trailer for Morbius, the next film in Sony’s Marvel Spider-Man universe.

Kristen Bell Gets “Real” for Redbook