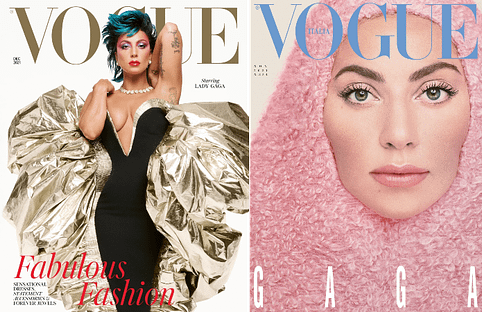 –Lady Gaga is on the December cover of of both British Vogue and Vogue Italia. She looks amazing on both, but it’s the Italia one on the right for me. In the interview, she talks about how committed she was when preparing for her role in House of Gucci. “It is three years since I started working on it and I will be fully honest and transparent: I lived as [her character Reggiani] for a year and a half. And I spoke with an accent for nine months of that. Off camera, I never broke. I stayed with her.”

-J. Crew unveiled its holiday campaign with Joshua Jackson and Jodie Turner-Smith, and the whole thing is a delight! The little videos further down on the page are sooo cute. “Katie, call me in case this doesn’t work out.” “You call it a toque.” “That’s its name!”

–Kristen Stewart confirmed that she and her girlfriend of two years, Dylan Meyer, are engaged. She told Howard Stern, “We’re marrying, we’re totally gonna do it.”

-In his British GQ cover story, Jamie Dornan says he’s sick of people making fun of Fifty Shades of Grey. “Look, put it this way: It’s done no harm to my career to be part of a movie franchise that has made more than $1 billion. Every working actor would say the same thing. It’s provided a lot. There’s no shame in saying it’s transformed my life and my family’s life financially. I am very, very grateful for this and always will be…But I take issue with the whole thing being just a bit of a joke. Everyone involved worked as hard as they could on those films, including myself.”

-Game Of Thrones actress Gemma Whelan, who played Yara, says the show didn’t have an intimacy coordinator so sex scenes were a “frenzied mess.”

-Speaking of GoT alums, Jason Momoa says he’s “camped out at his house” after testing positive for covid. Judging by the rep he gained while shooting in here in Toronto this summer, I’m not surprised.

–Ed Sheeran has been cleared to perform on SNL after completing quarantine following a positive test. Meanwhile, Taylor Swift and Saweetie have just been added as musical guests in Nov.

-The remaining members of Little Mix say that they talked to Jesy Nelson about blackfishing before she left the group last December. “Jesy was approached by the band in a very friendly, educational manner.”

–Shonda Rhimes‘ next Netflix show, Inventing Anna, will drop in Feb. The eight-episode limited series, based on a New York Magazine story about a charming young grifter who infiltrated NYC’s social scene, began production in fall 2019 and finished a full year later because of the pandemic.

-I love that the girls from The Bold Type spent Halloween together.

–Dave Chappelle introduced Jay-Z‘s induction into the Rock and Roll Hall of Fame, and began his speech by saying, “I would like to apologize to… Nah, I’m just f—in’ with ya.” Classy.

–Kieran Culkin visited Vanity Fair’s Succession podcast and talked about how his character will never admit how much he loves his siblings.

-In news that should surprise no one, the reviews for Showtime’s revival of Dexter are bleak.

–Jennifer Lopez recreated her 2002 “All That I Have” video for her new Coach campaign — and looks pretty much the same.

-Here’s a look at HBO Max’s upcoming series Station Eleven. I loved the book and I adore Mackenzie Davis, but man am I not ready yet to watch post-pandemic apocalyptic drama.