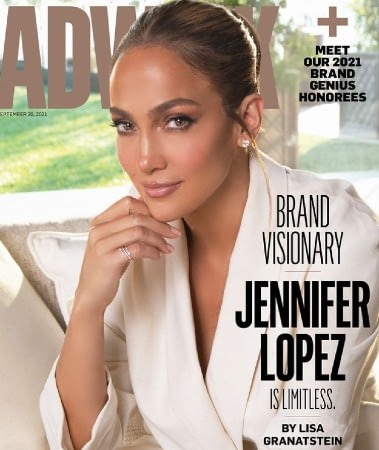 –Jennifer Lopez covers the new issue of Adweek, who has given her their Brand Visionary award. Ben Affleck was asked to weigh in and said, “All I can tell you is that I have seen firsthand the difference representation makes because I have seen, over and over and over and over, women of color approach Jennifer and tell her what her example as a strong woman and a woman succeeding and demanding her fair share in the business world means to them. I am in awe of what Jennifer’s effect on the world is.”

-Yet another Britney Spears doc is coming, this one from Netflix, who just released a short teaser.

–Jake Gyllenhaal screened his new movie The Guilty and told the audience that rumours of a showering strike were greatly exaggerated. “It was an answer to a question where I was being sarcastic and ironic and it’s followed me around ever since. I showered before I came here, so I’m sorry!”

-The Ted Lasso crew held a “friends and family” Emmys afterparty that featured karaoke, the famous biscuits and a birthday cake for Jason Sudeikis. I love that Brendan Hunt wore the pants from the last episode!

-This could rock the entertainment world: For the first time in its history, IATSE, which is made up of over 375 unions representing every discipline of film and tv labour, is preparing to strike after the latest contract talks between the organization and producers faltered. The stories about TV and film crew members being overworked and exploited seems to have reached the tipping point with the sudden popularity of this anonymous Instagram account.

-A Pitch Perfect TV series has been ordered at Peacock. The series is set several years after the events of the films, with Adam Devine returning as Bumper, who moves to Germany to revive his music career when one of his songs becomes big in Berlin. It’s got good bones: Elizabeth Banks will produce, while The Good Place’s Megan Amram will be the showrunner.

–Uma Thurman penned an op-ed condemning Texas’ anti-abortion law and shared her “darkest secret”: she had an abortion in her teens.

-Meanwhile, David Simon just pulled his new HBO project out of Texas because of the law.

–Amy Schumer revealed she is recovering from surgery after having her uterus and appendix removed due to “painful and debilitating” endometriosis: “I’m gonna try to share this story at some point to raise awareness because so many people don’t even know the word endometriosis.”

-Family Guy included a PSA on how vaccines work. That’s where we’re at now. Baby Stewie has to explain science.

–JoJo Siwa quickstepped her way to history in her Dancing with the Stars debut. She’s the first female celeb to be paired with a female pro.

–Cassandra Peterson, better known as Elvira, revealed she’s been in a relationship with a woman for 19 years.

When asked about the comparisons of Gerard Butler‘s 2009 film Gamer to the recent action flick Free Guy, Butler responded “I actually don’t know what Free Guy is.’ When his Copshop costar Alexis Louder explained, he said “Oh shit, is it? … I don’t watch Ryan Reynolds movies.” LOL

-I really like the Vulture series where they ask an actor a bunch of questions about a random role on their resume. Up today is Richard E. Grant talking about Spice World.

-Fans are having issues with the ending of Sally Rooney‘s Beautiful World, Where Are You. There are 944 people ahead of me in the library hold, so I will never know.

-And here’s the trailer for Netflix’s Passing, Rebecca Hall’s directorial debut starring Tessa Thompson and Ruth Negga. Set in ’20s Harlem, a Black housewife (Thompson) suffering through a quiet emotional breakdown reunites with a childhood friend (Negga) who’s now passing as a wealthy white woman. I still find it weird that Hall’s the one to tell this story, but the trailer is impressive.